The Double-Dyed Villains by Poul Anderson appeared in the September 1949 issue of Astounding Science Fiction. It can be read here at Archive.org. 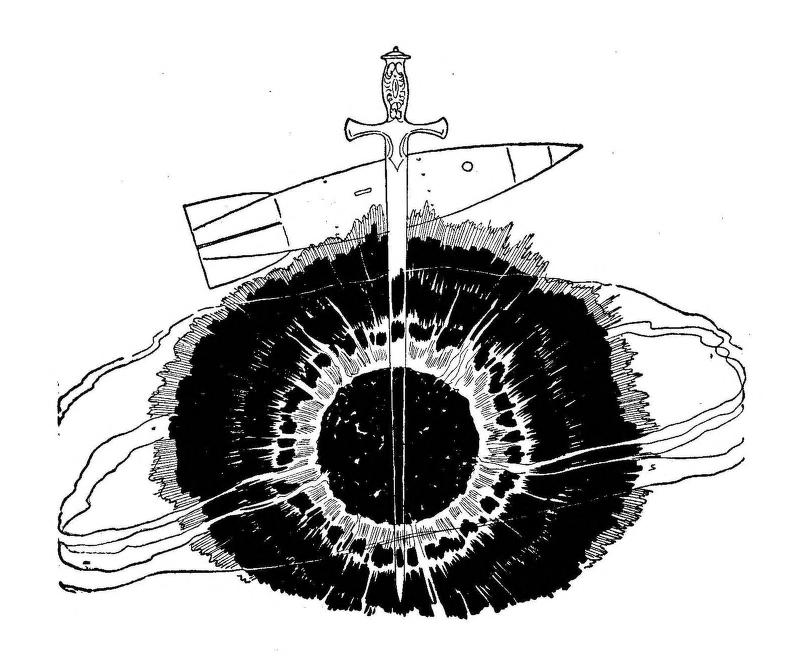 The sword and rocket ship are clearly indicative of Science Fiction.

I am going to need to hurry up and read Poul Anderson’s “important” books that are still being discussed in Appendix N and Pulp Revolution circles, or I’ll be too bummed out by his 1940s short fiction to go into any of his stories without a massive prejudice against him.

Campbell’s lead in for the story is “E. E. Smith suggested one way of maintaining peace in the Galaxy. But there might be another, equally effective method—”. If Smith’s method was the best of the best of the best of the best of all men heroically fighting, Anderson’s is a cowardly and manipulative deep state collaborating with the worst of the galaxy’s criminal elements to avert war. Really, it comes across as apologia for a CIA which, at the time this piece was written, was busy helping Nazis get out of jail and set up global criminal enterprises.

The Double-Dyed Villains tells the story of one Galactic Patrolman on the run from a planetary government, interspersed with tableau set on other worlds illustrating different cultures’ feelings towards the Galactic League, the actions they hope to take against the League to liberate themselves, and how the Galactic Patrol thwarts those efforts.

The main “A” story: the Galactic League gave the Luanian’s colony, Lhing, to the Marhal; Luan has elected a secessionist government and compiled an impressive list of grievances and evidence of the Patrol’s corrupting influence across the galaxy. Wing Alak is a Patrolman who had been making all sorts of underworld contacts with criminals, mobsters, traffickers and drug-dealers setting up an undercover-op to destabilize the Luanian independence movement. Unable to keep the new government from rising to power, Alak gets outed as a spook and goes on the lam. Alak teams up with a drug-pushing dragon-man, kidnaps the Prime Minister’s young daughter, and blackmails him into stepping down. He then gives a lengthy sermon on why it’s better for a corrupting deep-state to manipulate governments into maintaining peace than to allow societies to govern themselves for better or worse without foreign interference, espionage, bribery, blackmail, honey-potting, etc. and risk conflicts. It’s all cool, though, because the Galactic Patrol aren’t actually allowed to kill anybody and he wasn’t really going to kill the Prime Minister’s daughter.

It’s worth remembering that Alan Moore never intended Rorschach to be viewed as the “hero” of Watchmen—he was supposed to be a kook whose absurd principles were the only real threat to the plans of the real hero, Ozymandias, to bring about world peace. Yes, it was at a price—the good of the many at the expense of a few, and based on a lie–but it WAS peace! Of course, readers gravitated towards the grim and disturbed, but deeply and passionately principled Rorschach, who would rather die than be enslaved by the tyranny of a falsehood.

What Poul Anderson gives us is a Watchmen where Alan Moore tells us outright that Ozymandias is the good-guy and there is no Rorschach to take a principled stand against the lies, treachery, corruption, and lawlessness being used for the Greater Good. Even if the point is well-argued and seemingly unassailable when put in terms of weighing many lives against the graft, corruption, and manipulation necessary to save them, it feels unmistakably evil and wrong.

This story could be read as an illustration of the wrongness of such an approach to maintaining galactic peace–Galactic Patrol are the “double-dyed villains”, after all. Their actions DO lead to deaths in many cases, though they absolve themselves of responsibility by clinging to their golden rule and self-assurance that what they do is for the good of the galaxy.

It’s an undeniably well-written story, but there’s no one to root for–if you would stand against the Galactic Patrol, you tacitly support war, death, genocide–massive loss of innocent human life; if you concur with Alak’s and the Patrol’s reasoning, you lower your eyes in shame and genuflect to men who see themselves as your moral and ideological betters, who would control you and your way of life as they see fit because they believe they know what is best for you.