Short Reviews – The Quest of Iranon, by H.P. Lovecraft

The Quest of Iranon, by H.P. Lovecraft appeared in the March 1939 issue of Weird Tales. It can be found all over the place, but you won’t have to download a pdf if you go here. 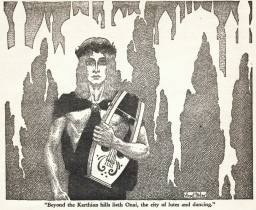 Look at this loser

The Quest of Iranon may be the first old pulp story I’ve read and reviewed for Short Reviews that I’d already read before. While I’m a big fan of Lovecraft, I tend to prefer his science-fiction and horror to his more strictly fantasy outings. Dreamworld stuff is all right when it’s well-grounded, but much of his Dreamworld stuff I’ve generally found weaker, and The Quest of Iranon is perhaps one of my least favorites.

Iranon is a traveling bard from the city of blah, in the valley of bloop, who finds himself wandering in the lands of blarg. He longs for his wondrous city of blah and sings songs that are beautiful and haunting. He does so wandering ageless from place to place until either he’s sick of the place or the place is sick of him. Okay, so that is not entirely fair to the story, but this, of all the Lovecraft I’ve read, feels the most derivative of Dunsany.

While there is, I suppose, some lovely symbolism in this piece and pathos-evoking tragedy in the twist that Iranon was just some schlub who made up his magnificent city with which none can compare, it’s hard to escape the feel of it being merely Dunsanian homage, especially when you’ve seen Dunsany do as much or more with fewer words. Perhaps the greatest tragedy is this piece in which an author dies disillusioned of his creation, one so wonderful that the real world paled in the author’s mind, was published posthumously and alongside a story as bad as August Derleth’s The Return of Hastur.

Feel free to tell me how wrong I am about this story in the comments!