Short Reviews – The Raid on the Termites, by Paul Ernst

The Raid on the Termites by Paul Ernst (best known for his pulp crime-fighter The Avenger) was the featured cover story of the June 1932 issue of Astounding. 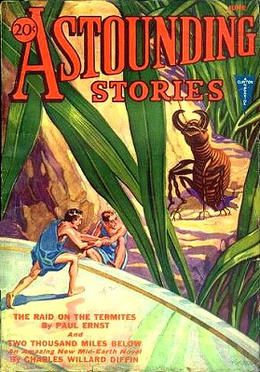 You know those stories, you’ve seen them before in countless children’s shows, where the kids go “wouldn’t it be cool to see the inside of the ant-farm?”, they somehow get shrunk down and find themselves in a crazy perilous world of giant bugs?  Raid on the Termite Mound is basically that in a nutshell, but that’s really so reductive that it’s not fair to how good this novelette is.

I was honestly expecting this to be a lot cheesier than it was, because the rote setup is all there: an entomologist opines the difficulty in studying termites in their natural environment, his globe-trotting adventurer sportsman friend indulges his ramblings, and a mad scientist who has discovered ‘the final element’, element 85 (c’mon it was 1932), which he’s used to develop a shrink ray.

Where The Raid on the Termites shines are in its pacing and its attention to detail. The pacing is important, because all of the action and tableau are very deliberate and well-timed; at no point do you feel like you’re being bombarded with just a parade of implausible sci-fi action scenes, but the scenes and settings are well established, and the scientific (or pseudo-scientific) explanations are concise yet complete. The attention to the anatomical details and features of the microfauna described serves to heighten the tension and realism; Ernst’s research or genuine interest in entomology are what make the “brain termite”, carried upon the shoulders of slaves and telepathically controlling the nest, seem just as real and plausible as the workers and soldier termites.  One feels drawn into it as those violent nature documentaries recording the life and death struggles in the giant world of tiny creatures.  Only here, two of those creatures are men less than an eighth of an inch tall armed with tiny clippings of ultra-fine gauged steel wire which they use as spears. 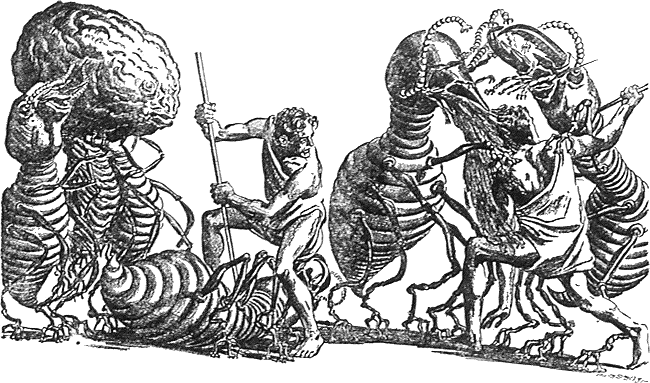 Ernst has me totally convinced that brain bug could be a real thing; I mean, I haven’t gone inside a termite mound and seen different!

Ernst’s writing here is really a notch above and made this familiar story seem so special and exciting. He even pulls off a little twist that a lesser writer could have tanked the story with. It’s hard to convey how pleasing this story was, because it’s such a familiar story, and it hits all the notes you expect this kind of story to hit: the workers, the soldiers, the wonder at the strange hive intelligence, the grotesque food stores, the queen’s chamber, the life or death fight of man against the insects… it was all there, and I’ve seen it all before in some form or another (multiple times in Saturday Morning Cartoons), but the story packed unbelievable punch and was such a satisfying tour of the concept.

The Raid on the Termites is available for free via Project Gutenberg and Archive.org.

Looking for new sci-fi and sword & sorcery goodness for your shelf?  Back today for a Subscription to Cirsova Heroic Fantasy and Science Fiction Magazine!