Short Reviews – The Return of Hastur, by August Derleth

The Return of Hastur, by August Derleth, appeared in the March 1939 issue of Weird Tales. You really shouldn’t read it, but if you must, it can be found here with other, much better, stories at Luminist.org. 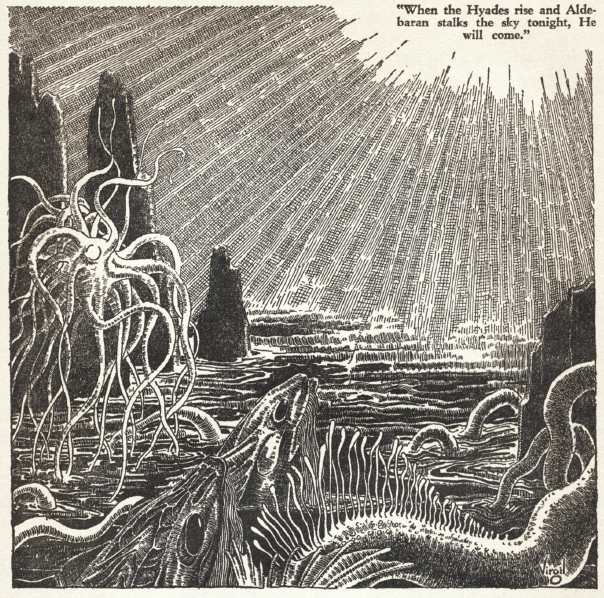 Going into The Return of Hastur, I was certain that August Derleth was going to be pretty bad from his reputation alone, but he turned out to be on the nose exactly as bad as I thought he would be in the very ways I knew he would be bad. The Return of Hastur drips will all of the greasy, slimy hallmarks of fan-fiction that drives me up the wall any time I hear or see the word “Lovecraftian”.

This is one of those stories where the Call of Cthulhu “Burn the Books” meme comes from. The Mary Sue’s friend and client has left in his will that someone needs to burn his house down along with several books in his library. In the very first page, we have the Innsmouth Turnpike, where said friend had an estate off of, and name-drops of Arkham, Miskatonic University, De Vermis Mysteriis, Cultes des Ghoules, Unassprechlichen Kulten, the Book of Eibon, the Pnakotic Manuscripts, the R’lyeh Text, the Necronomicon, and Abdul Alhazred. ON THE FIRST PAGE. We get it, Derleth, you know all of the evil books and places from Lovecraft; you’re a big fan.

The Return of Hastur briefly flirts with being less than completely terrible, intimating certain strange things about the friend’s death, weird sounds following the wake, foul smells of a rapidly putrefying body, and some added drama of a relative willing to contest the will – obviously the man was crazy, and specifying the destruction of valuable property could testify to the state of mind of someone not all there. So, uh… the books aren’t going to get burned right away.

Of course Derleth takes his tale right back down the crapper with his fanboy signaling; his Mary Sue has business in Innsmouth because he has a client who wants to make sure his property isn’t demolished along with the other clearing of buildings along the waterfront following the government raid, because “Hey, guys, this is actually also a sequel to Shadow Over Innsmouth, isn’t that awesome!?”

During a lunch at a restaurant near Miskatonic University, a Professor of Eldritch Sciences explains to Mary the new Derlethian cosmology. Y’know, the one that craps up the mythos and lets CoC GMs stick in “good and helpful Elder Gods” to get the party out of jams?

I don’t know if this is one of the first stories where he introduces the concept (I know I’ll never read any others to pinpoint the exact moment the Cthulhu Mythos became forever tainted), but here Derleth goes into how there are two sets of Elder Gods, the “cosmic good” Elder Gods, and the “cosmic evil” Elder Gods, who are warring. And the Evil elder gods are all associated with different elements and are in conflict with one another, as well: “But through what I have learned, it is possible to know that Great Cthulhu is of the Water Beings, even as Hastur is of the Beings that stalk the star-spaces; and it is possible to gather from vague hints in these forbidden books where some of these beings are. So I can believe that in this mythology, Great Cthulhu was banished to a place beneath the seas of Earth, while Hastur was hurled into outer space, into that place where the black stars hang, which is indicated as Aldebaran of the Hyades, which is the place mentioned by Chambers*, even as he repeats the Carcosa of Bierce.”

At this point, I was done. I gave up. I couldn’t keep going. This is the only pulp story I’ve read so far that was so terrible that I could not force myself to finish it.

Setting up the Mythos gods into Good and Evil and assigning elemental aspects to them seems not only dumb but fundamentally undermining to Lovecraft’s themes of the truly alien natures of cosmic horrors – things that were like gods, but not, things which were unknowable and inimical to human life and sanity but could not be either good or evil because they could not be understood. Nope, they can be easily shoe-horned into a nice little Aristotelian paradigm: a good and evil binary duality, and a four point elemental alignment taxonomy.

It’s been often written that Lovecraft’s horrors were, to a degree, a metaphor for the rapid advancement of science and technology over a relatively short period during which he lived and wrote. The radium age is foreshadowed in his writings. Powerful and destructive sciences were developing and revealing new things every day that redefined man’s understanding of the universe – these things were neither good nor evil, they just were, and they had potential to bring about man’s ultimate undoing.

But nope, Derleth drags Lovecraft’s monsters back into the primitive and cozy realms of good and evil, and earth, wind, fire, and water.

*Bob Chambers’s King in Yellow stories are better and more dread-inspiring than any weak attempts at shoe-horning him into the Mythos, which has also been another point of aggravation for me.