The Smoking Land by Frederick Faust as George Challis was originally published in Argosy; the version reviewed was reprinted in the February 1950 issue of A. Merritt’s Fantasy Magazine. It can be read here at Archive.org. 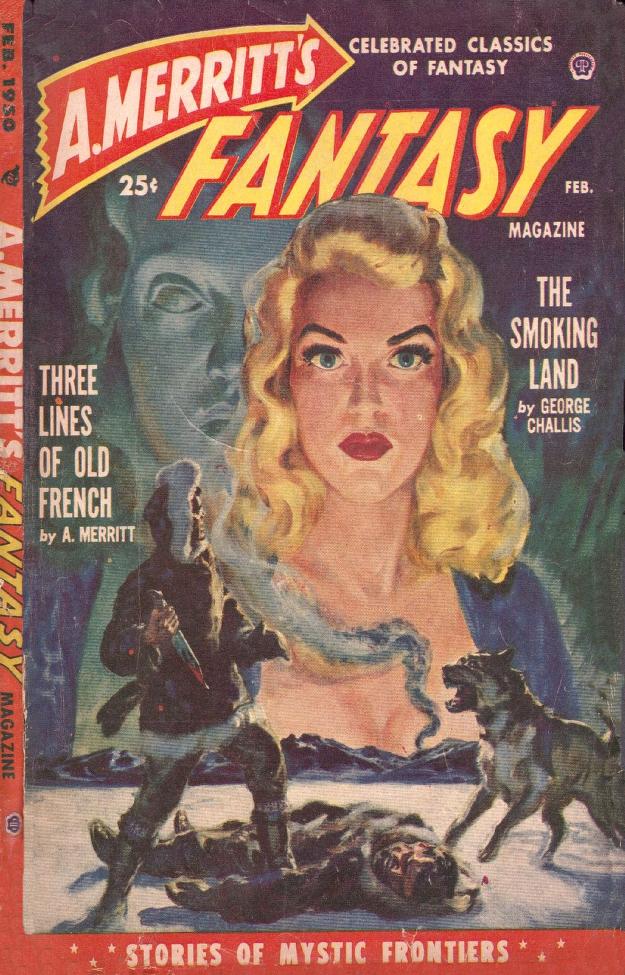 Even during the Pulp-era there were Pulp Revivals going on. One such effort to keep classics of the pulp SFF canon in print and fresh in people’s minds was the short-lived “A. Merritt’s Fantasy Magazine”. Launched in late 1949, a few years after Merritt’s death in 1943, AMFM’s intention was to spotlight classic stories by Merritt and other contemporary pulp greats they did not want to go forgotten.

The feature of AMFM’s second issue was the complete text of Frederick Faust’s “The Smoking Land”, which had been serialized in six parts in Argosy in 1937. The issue begins with a short biography of Faust, highlighting some of the many names he’d published stories under, and lamenting his tragic death in Italy in 1944 while traveling as a war correspondent.

It’s hard to say how original “The Smoking Land” is, but it’s well-told and incredibly exciting. Honestly, the first half was the best, as the hero pursues the mystery of the titular “Smoking Land” in a high-suspense, slow-burn trek through the Alaskan wilds; the eventual reveal was predictable and rather rote Lost World science-fiction, but the road to get there was excellent. Still, I’m getting ahead of myself. To get the full effect of the mystery-half, you might go ahead and read it yourself, rather than reading the summary below.

A simpering scientist approaches a rancher and tells him his best friend is in grave danger—he’s working on top-secret super-science than world leaders would kill to get their hands on. Scientist-friend need rancher guy’s help, and has to come at once. Scientist-friend is indeed working on deadly super-science, and rancher guy shall wait outside the lab with his revolver to make sure no disturbs him in his crucial moments. Simpering scientist himself, who admitted to the great temptations offered a man, makes a half-hearted attempt to pass rancher’s guard…

An explosion destroys half the mountain where scientist-friend is doing his research, and rancher guy barely survives by stroke of sheer luck. The death of rancher guy’s friend haunts him, moreso when six months later a strange, seemingly fossilized ultra-light diamond hard scrap of wood is discovered in British Columbia with the words “Bound north of Alaska for the Smoking Land and” scratched into it in none other than scientist-friend’s handwriting!

What ensues is grueling adventure in the Alaskan wilds, an enclave of “lost” Anglo settlers who have created a two-caste system of genius “pure-bloods” and mixed white/inuits held together by a hokum religion with a nameless goddess, a high priestess (devastatingly hot, naturally), and a council of wise men living inside a volcano they’re keeping from going active with super-science.

The priestess is a pawn of the wise men and kept in the dark about the true nature of their society. Scientist-friend was abducted by the wise men to add to their wealth of insane super-science. Rancher guy’s epic quest to find the Smoking Land is gonna screw up their plans as it offers scientist-friend a snowball’s chance in hell of finally escaping after years of playing the game and pretending to be on the verge of finishing his doomsday device. Rancher also breaks taboo by pulling high priestess into the wise men’s bunker in the heart of the volcano rather than let her get immolated after she’d escorted him to the doors. So, they’ve got to save her too!

It was an imperfect story, and while very enjoyable up to the hero’s arrival in the smoking land and still entertaining through the climax and conclusion, the notion that a tiny population of 16th century British explorers could selectively breed their way to becoming a race of super genius masters of world-destroying super-science so strained credulity that even a pulp-loving guy like me kinda rolled my eyes and was a bit let down by the big reveal regarding the “truth” about the Smoking Land. Plus, the High Priestess’ snarky Brunette friend was clearly best-girl material.

For its flaws, I’d still say it’s a brisk read and well-worth it. Also, the kerfluffle over complaints about using “they” as a singular pronoun will make the part where the 16th century Lost World Anglos are perplexed that the hero uses the plural “you” singularly instead of the correct “thou” even funnier.