The Spider Men of Gharr by Wilbur Scott Peacock was the featured cover piece for the Summer 1945 issue of Planet Stories. 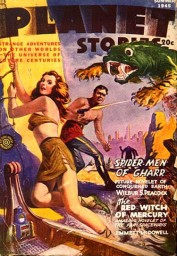 Lura and Trent being attacked by a brok. A good example of why Planet Stories’ readers were griping about Parkhurst’s poor composition.

The Spider Men of Gharr is one of those pesky little editor-written stories that sometimes find themselves published in whatever magazine the author is an editor for.  Fortunately, Wilbur Peacock’s solid taste in science fiction carried over into his writing to produce, if not an exceptional, a workmanlike and enjoyable novelette.

The year is 2210: Earth has been invaded by a race of multi-armed indestructible cyclopean giants.  Kimball Trent, action scientist, has been working on a subterranean refuge where humanity can hide out from the alien invaders.  An accident while working on the hab-dome’s cooling systems cryogenically freezes Trent; he wakes up over 500 years later in 2735, lamenting that his project has gone unused, Earth is enslaved and humanity has surely fallen into barbarism.

Trent encounters a woman, Lura of the Tunnels of York, and after fleeing a Gharrian and fighting a brok (that weird monster thing on the cover) together, she delivers him to one of remnant humanity’s bastions…  And declares him to be a traitor!  How else would he have the crazy weapon he has and be wandering the wastes alone?  Trent bests Lura’s Rocky Horror brother Korm in fight with a well-placed judo chop (he is an action scientist, after all) and demands an audience with the Elders.  The elders buy Trent’s man-from-the-past story, and Trent proves himself a friend to man and an enemy to spider-men, helping teach the remnants how to get their mechanical stuff working again.

The whole story builds towards a big raid on a Gharrian breeding camp.  It’s here that Peacock ratchets up the horror and blood & guts.  Humans are being kept in a big pen to be scooped out one man and one woman at a time by the giant Gharrians to be forced to breed.  Though the guard robots are cleverly dispatched with spears and wire lassos, using their electrified guard fences against them, both Lura and Trent are captured and taken for interrogation during the chaos of the escape after the Gharrians set the broks on raiders.

What follows is an implausible escape, the revelation that the Gharrians are actually little telepathic tentacle monster wearing giant robot suits. There’s an awesome-gross scene where Trent is mangling a Gharrian with his bare hands for information, popping out its eyes and ripping off its tentacles.  After the revelation that the Gharrians have been feeding on human brains, Trent and Lura find the inner sanctum where unsuited Gharrains are floating in containers of green ooze and start squishing them.

One thing I would like to specifically point out about The Spider Men of Gharr is that it is yet another example of how the pulps are not this horrible den of regressiveness that they’re often painted to be.  The co-ed seven person raiding group looks almost like a Joss Whedon cast, complete with a ginger giant and an interracial couple.  Lura, like most pulp heroines is “so fearlessly reliant and so feminine at the same time.”  Despite her depiction on the mediocre cover art (and yeah, this issue’s art was pretty sub-par), she is no shrieking damsel and one of two women who went on the raid to liberate the breeding camp.  There’s even a “get with the times” moment between Trent and Lura’s brother Korm as they’re prepping for the attack:

Korm frowned.  “Of course,” he said.  “She is good with a knife and spear; she has been on many raids.”

Korm shrugged. “That is good; she will influence the female breeders to escape.”

The Spider Men of Gharr may not be remembered as some great master work of science fiction, and Peacock may have taken a bit longer to get where he was going than he should, but it’s an exciting story that bears all of the hallmarks of pulp science fiction of its day.  As a piece by the editor, it also gives us a glimpse at the sort of sci-fi stories the editors would have been looking for, as they’d be writing what they themselves would want to read.  In this case, we have a story with smart capable men and smart capable women, gross evil aliens and robots, cool sci-fi weapons, big fights between aforementioned smart capable men and women and the gross evil aliens and robots with aforementioned cool sci-fi weapons, and happy endings where deserving dudes end up with deserving dames and the promised future of mankind is better for it.