Tooth or Consequences, by Robert Bloch appeared in the May 1950 issue of Amazing Stories. It can be read here at Archive.org.

Well, not quite an oof, even though maybe it should have been an oof.

In Tooth or Consequences, Master of Horror Robert Bloch tells the story of a struggle between a vampire and his dentist that by all rights should’ve been terrible but is dragged kicking and screaming across the threshold of “Okay, that was entertaining enough,” by his excellent writing that successfully merged humor and horror without one too badly stepping on the other. 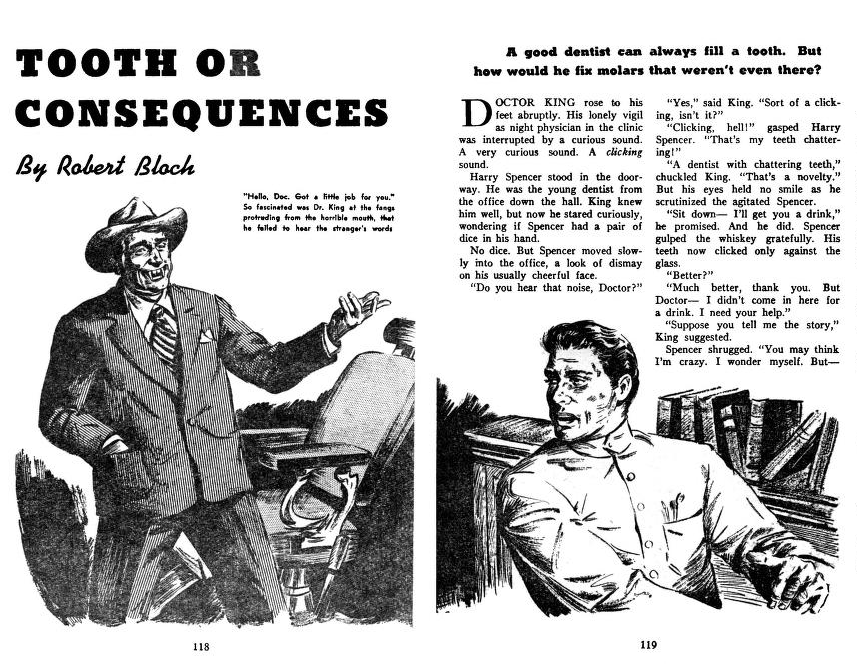 It’s really not so bad as the name or the art would imply.

A dentist gets a new patient with deformed teeth.

The patient is a vampire.

Naturally, this freaks the dentist out.

While the vampire is visiting the hospital for dental work, he’s also stopping in on the medical supplies to swipe some blood.

The dentist tries to figure out some way to stop the vampire. The vampire’s all “Look, man, it’s not like I want to be a vampire–I’m just stealing blood from the hospital, don’t make me bite your neck.”

The dentist decides to treat him like any other patient. Kills him with a silver filling. Laugh-line. Applause.

Again, this should’ve been awful, but somehow it works. It’s also one of the shorter stories in the issue, so it helps that it doesn’t overstay its welcome.

Speaking of horror, Duel Visions, an all new anthology of weird horror and macabre tales from Misha Burnett and Louise Sorensen is out now from Cirsova Publishing!