Robert E. Howard’s Conan stories and Edgar Rice Burrough’s tales of Barsoom were my primary entry points into the world of pulp SFF over the past couple of years. For me, the blood-pumping action and arguably unparalleled prose of the old masters are but one source of pleasure. Perhaps equally gratifying is the insight gained in relation to succeeding works over the years. Though never a comic connoisseur, I am denizen of various spheres of nerdom, and thrilled when I learned of John Carter’s part in the birth of Superman.

Conan’s role as progenitor for the noble barbarian archetype is pretty well-trodden ground. Look-alike characters scatter the landscape of our modern culture, across SFF and less serious genres.

The look, feel, and even voice (thanks, Arnie) of Conan have become commonplace tropes for brutish fighting men, often apart from civilization and yet above it. As much as I’ve come to relish Conan’s adventures, however, an expanding awareness of Howard’s works has also brought a sort of melancholy. Despite the large shadow cast by his Cimmerian, the Texan was no one-trick pony; during his short time he created a number of memorable characters and settings that have continued to inspire his successors in the craft. Their current obscurity is tragic.

One of these characters, often overlooked but perhaps not so obscure as the rest, is the wandering Puritan, Solomon Kane. I’ve only recently begun to dig into his stories, but already I am receiving flashes of insight and blinks of cloudy suspicion. Kane shows a depth and ambiguity unlike that of his more barbaric Howardian brethren. While equally skilled and competent as Conan or Krull or Bran Mak Morn, Kane is driven by a fury of presumably divine origin. Conan possesses his own code of honor but most often seeks self-enrichment. Kane, on the other hand, possesses no riches and seeks no power. The execution of justice and the defense or avenging of the innocent are his. Were he less dark and brooding, less haunted and more pious, he could be more strongly evocative of the paladin paradigm. As it is, he is something different.

“He was a man born out of his time—a strange blending of Puritan and Cavalier, with a touch of the ancient philosopher, and more man s touch of the pagan, though the last assertion would have shocked him unspeakably. An atavist of the days of blind chivalry he was, a knight errant in the sombre domes of a fanatic. A hunger in his soul drove him on and on, an urge to right all wrongs, protect all weaker things, avenge all crimes against right and justice. Wayward and restless as the wind, he was consistent in only one respect—he was true to his ideals of justice and right. Such was Solomon Kane.” – “The Moon of Skulls” This fanaticism and obsession (for that is the clear nature of his impetus) separates him from his counterparts. So too does his fearlessness (or perhaps his grim acceptance) of the strange and occult. In “Skulls in the Stars,” Kane refuses to flee from a spectral foe, grapples with the wraith, and comes out on top. As awesome as Conan is, I can’t imagine him fighting a ghost unless backed into a corner with no hope of escape.

During my brief time thus far with the noble Puritan, the resemblance of at least two major heroes has struck me, though neither of which, so far as I know, has been acknowledged to have been inspired by Howard’s champion.

Though the concept of the Black Knight was nothing new during Howard’s time, I struggle to think of many preceding heroes demonstrating a similar duality: the tortured hero – compassionate protector and guardian; avenger and arbiter of justice. Though throughout his stories we are frequently told of periodic pangs of guilt or regret, Kane is unerring in his resolve and in his belief in his divine mandate to punish the wicked. It’s no wonder, then, that now the appellations “Caped Crusader” and “Dark Knight” conjure images not only of Batman for me, but of Solomon Kane, though there is no officially spoken link between the two. Batman is said to have been chiefly inspired by the likes of Sherlock Holmes, Dick Tracy, the Shadow, and Zorro. The latter, then, could be a possible intersection of the two. Howard did write a poem called “Senor Zorro,” though I haven’t been able to track it down; it’s possible that Zorro provided elements of the Kane character. Still, Zorro, from what I know of him, was a somewhat flashy and flamboyant Robin Hood-type champion of the down-trodden. Despite his mask and black attire, he wasn’t a skulker. Both Kane and Batman, on the other hand, are denizens of the darkness. They both use the shadows to their advantage, and when possible seem to materialize out of the night to frighten their enemies.

There was no moon, and Le Loup’s keen imagination pictured the dark slayer, Solomon Kane, gliding through the blackness, a shadow among shadows. – “Red Shadows”

The other character in which I see subtle (and not so subtle) reflections of the Puritan is another namesake of the original cursed, Biblical wanderer – Kwai Chang Caine, from the hit series Kung Fu. Where Solomon’s curse is largely brought about by his zealous thirst for justice and hatred for evil and his inability to abandon the Quest, Kwai Chang is forced to flee China for a (justified) killing. Thus his curse to wander is more a result of a perverted justice, with Caine as the hunted rather than the hunter. This reversal aside, both men in their wanderings fight to protect the weak, unlike the original Cain. 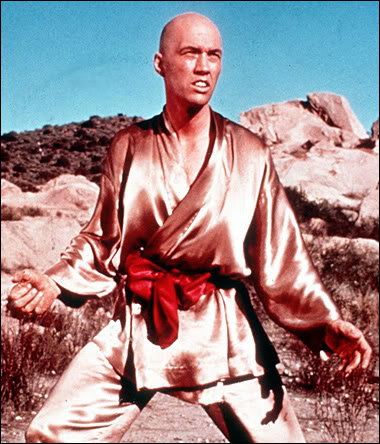 What other commonalities and ties between contemporary (nerd) culture and SFF are out there waiting to be discovered? I look forward to digging deeper as I continue to read about Solomon Kane and beyond.