Son of the Pulps Part 3: The Wold Newton 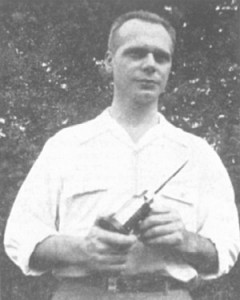 One of the very few pictures of Farmer before he hit 50.

We conclude our discussion of the influence of pulp on Philip Jose Farmer with a look at his Wold Newton family. In Tarzan Alive, Farmer links his favorite British lord to dozens of fictional characters, many from the pulps, including Sherlock Holmes, Bulldog Drummond, The Shadow, Sam Spade, Nayland Smith of Dr. Fu-Manchu fame, James Bond, Professor Challenger, Doc Savage, and Captain Blood. Displaying the exuberance of Farmer’s imagination, two important antecedents of this legendary line are Mr. Darcy and Elizabeth Bennett.

Many of these would interact in his later stories.

It’s impressive that this isn’t merely a straight-up disaster! It’s very easy for a mash-up of famous names to come across as contrived, silly, and lame, a concept a teen fanfic writer would come up with.  But Farmer pulls it off where most others fail.  Why?

For one, Farmer has outstanding erudition.  He was a bibliophile his whole life, with a deep knowledge and appreciation for these characters earned from reading countless stories by their original creators. He is thus able to accentuate the most exciting elements of their personalities and plan a suitable story to fit them, while avoiding the pitfalls revealed through the less successful tales.

This, incidentally, highlights a general problem with many pastiches.  Many times, the later authors either didn’t read enough of the original stories, didn’t examine them deeply enough, or completely missed the appeal.

Related to this, Farmer strikes a perfect balance, making his pulp figures suitably heroic and impressive while still human and fallible enough to be genuine characters.  Here, he avoids two other common mistakes.  One being the temptation to make the character an idealized paragon, resulting in a boring cardboard cut-out.  The other being to go the opposite route, making a James Bond no different than a generic MI6 mook.

Speaking of which, in Tarzan Alive, Farmer notes how there are both tremendous physical gifts and great intellectual powers associated with the Wold Newton line, but both are not always present. So while Tarzan has the good luck of both, Nero Wolfe only has the brains, while Bulldog Drummond solely the brawn!

Perhaps most importantly, Farmer fully understood the outstanding sense of adventure in the old pulp stories, and applied it to his own writing.  Thus, these famous names never outshine their swashbuckling tale, no matter how interesting they are.  They harmonize with the plot, building a rich world that is the hallmark of great pulp.  Consider how exotic, detailed, and full of mystery Robert E Howard’s Hyborian Age is.  Or the jungles of Africa that Tarzan traverses.

Also, note how similar the Wold Newton family is to Farmer’s most famous series science fiction series, Riverworld.  The latter is also a crazy collection of legendary personalities, featuring Sir Richard Francis Burton, Mark Twain, Alice Liddell (the inspiration for Alice in “Alice in Wonderland”), Hermann Göring, King John of England, and Liver-Eating Johnson, among others. The concept is identical, only with pulp heroes and villains replaced with historical ones.  It too is a land filled with limitless adventure.

Thus, the Wold Newton is a success where countless similar ideas are failures.  It showcases Farmer’s talents as a writer as well as what he learned from the pulps, both for the individual characters as well as adventurous stories in general.

And hopefully, this trilogy of articles has demonstrated that among the myriad of influences on Philip Jose Farmer, the pulps were a central and essential one. 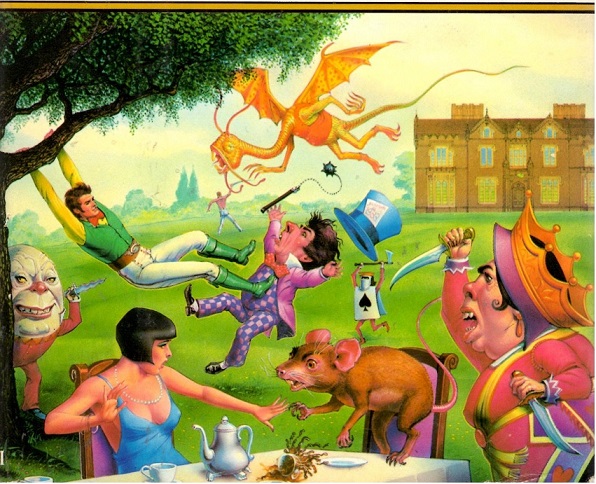 This cover for “Gods of Riverworld” mesmerized me as a child.