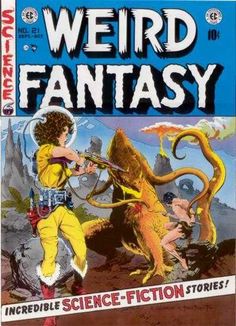 Everything that we’ve been told about science fiction and fantasy writing for the last couple of decades is a lie. All we hear is ‘you have to make it more real’ and ‘that needs to be realistic dialogue’ or ‘it wouldn’t really happen that way’. It’s led to the genre changing from John Carter leaping over mounds on Barsoom and felling six armed giant creatures, to a culture of big name editors telling classes of students that unless you can explain the evolutionary biology of alien species, you shouldn’t have any humanoid aliens in your work (I’ve sat through such a class). In terms of Space Opera, it’s spelled the death knell for the sub-genre except in very rare instances.

On the micro level, authors have shied away from description, preferring a modernistic Hemmingway style that’s dominating our publishing industry. That style was originally hailed for its realism, creating an open space where readers can feel something is real.It leaves more to the imagination, in theory, creating quicker sentences that a reader can’t dissect or overanalyze. It also has the side effect of removing a sense of wonder from the reading.

On a macro level the realism writing mindset has led to characters in extraordinary settings with extraordinary gifts sitting around and doing ordinary things. As a case study, look at Tom King’s Vision graphic novel, hailed by critics in 2016. The book amounted to a well-known android/robot with crazy powers feeding his robot children cereal and giving them piano lessons in order for them to fit in. This is a character bread from an ultimate space robot villain, Ultron, originally a classic science fiction and space opera concept at its finest. Vision was reduced in this mini-series to boring realism, and the sales in turn reflected that even if the critics applauded.

There’s also the extremely lopsided politics that turn off average readers. Most people don’t want to get fed politics in their entertainment. The real world is already negative enough as we’re bombarded 24-7 with news reports of how horrible everything is. The insertion of politics into story stems from an excess of realism mindset, trying to mimic what they see in the mainstream media. It creates a feel-bad “we’re all victims” message instead of telling a compelling story with heroes solving problems.

It’s no coincidence that as realism has overwhelmed modern Space Opera and Science Fiction, authors are pushed to become more and more realistic through the way publishers purchase books. The publishers see critical accolades and awards being given to books that promote extraordinary people doing ordinary things, and a free promotional tool for short term sales. Over the long term, however that marketing strategy has destroyed the sense of wonder that made multiple generations of readers go wide-eyed when picking up a Space Opera book in our youths. So few writers know any different anymore. However, the sales trends show that the sci-fi and comics industry has declined to a point where very few people read at all.Though as has been discussed on this blog before,these industries used to be a hallmark of culture read by millions.

The problem is realism goes against what these genres were created for. They go against what the readers crave. The people in power at the publishing houses that produce these genres turned to content that readers don’t want, and moreover the establishment Big Publishing actively dislikes the genre, wishing they could be “real” literary fiction. #SpaceOperaWeek, for example, is an event created by Tor, with one of its primary contributors stating up front, “I’m not really a Space Opera kind of girl.”

It’s bizarre to see people paid to write and provide criticism on the genre actively stating they don’t like it. If they’re not the target audience, why should they be listened to? I posit to writers: if you want Space Opera and Science Fiction to survive, we must make a culture shift to stop listening to the critics who hate the genre, and instead listen to the readers who love it.

If you look at work that readers love, work that lasts over time, it almost invariably bucks the realism trend and goes fully into the realm of what the critics would call absurd. You won’t see the book Ack-Ack Macaque by Gareth L. Powell winning many awards or being talked about in critical cricles, but there’s an element of excitement about “a cigar-chomping monkey, nuclear powered Zeppelins, electronic souls and a battle to avert Armageddon” that immediately compels a reader to pick up the book. I mean holy crap that sounds cool, doesn’t it? Why wouldn’t we want more of this element to bleed over into our Space Opera writing?

Or would you rather read about wondrous aliens from dying planets like Superman brushing his teeth for 3 pages and staring in a mirror reflecting on his life?

It’s pretty obvious what’s fun, and what isn’t. Long term sales do reflect readers tastes, despite what gets propagandized to us by the publishing elite. The Pulp Revolution offers content that has the fun factor that can save the genre from endless doldrums. And I’m taking that to heart. In my own writing, I look at a finished draft manuscript and think to myself: what can I do to add a component of unreal that would be fun for both me and the reader? How can I stretch my imagination to the point where I’m providing an actual service in science fiction or fantasy? Keeping things strictly the way they “will be” in several hundred years or whatnot won’t create a compelling setting or interesting story.  That’s what the Pulp Revolution is about recreating and bringing back, so that people tune in and check it out. That’s what will create great Space Opera.

Fellow writers, take this advice: don’t worry about realism, try to have as much fun as possible.

Jon Del Arroz is the author of the Alliance Award nominated and top-10 Amazon bestselling Space Opera, Star Realms: Rescue Run. His second novel, For Steam And Country, is set to be released this summer. He is considered to be the leading Hispanic voice in Science Fiction, and hails from the San Francisco Bay Area. He regularly posts to his popular Science Fiction blog at http://delarroz.com. Twitter: @jondelarroz Gab.ai: @otomo