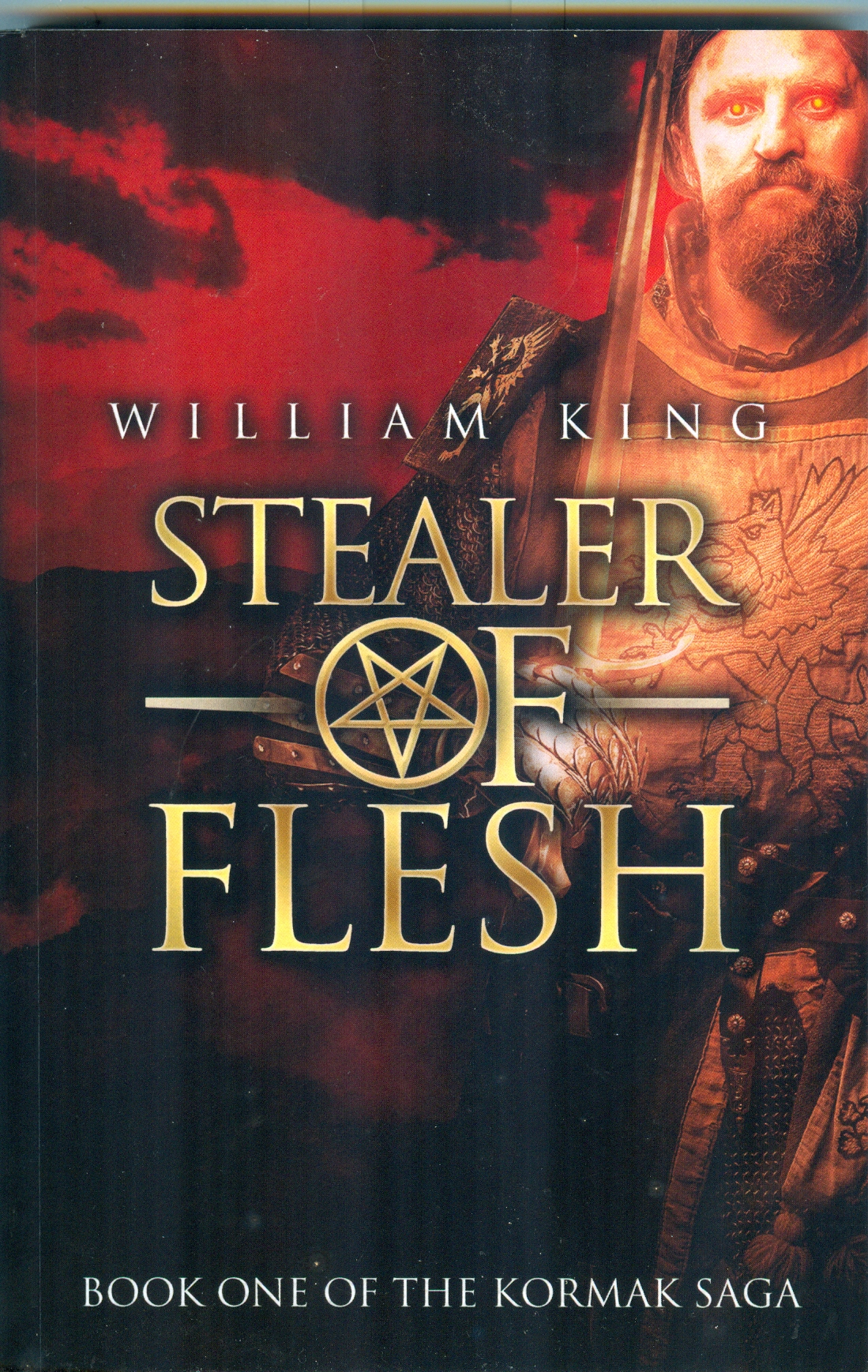 Around fifteen years ago, there was an online magazine, Flashing Swords. One story that stayed with me was William King’s “Guardian of the Dawn.” The story stood above others in delivery. It featured Kormak, a member of an order that fights servants of darkness. “Guardian of the Dawn” was dark and moody with a strong supernatural element. I loved it.

William King has since written novels featuring Kormak. Stealer of Flesh is the first novel. The novel is a series of four novellas wherein Kormak tracks a demon released from imprisonment by a foolish nobleman. Kormak fails to stop the release of the demon in “The Demon Unleashed.” The climax is very well paced.

“The Wolves of War” has Kormak in a war-torn land on the trail of Razhak the demon. Razhak takes over the bodies of people for a period before the bodies give out. “The Flesh Stealer” takes place in a city with an Orc as a criminal boss. The orc is very good with the sword. “This Way Lies Death” is the climax of the novel with Razhak the Ghul traveling to the ruined city of the ghuls in a desert. Kormak has some companions on the way.

Stealer of Flesh is a short novel. I would knock off a novella each night. The episodic nature lends itself to self-contained periods of reading. Kormak is a very good warrior though there are moments of suspense at times. The world unfolds with each novella. It is standard sword-and-sorcery with some elements taken from high fantasy. There are orcs and mentions of elves. The delivery is all sword-and-sorcery though. Orc is a word that I associate exclusively with J. R. R. Tolkien. He took the goblins from The Hobbit and made them more menacing along with the name change to orcs. William King’s orc is big. Kormak wields a dwarf forged sword that deals with evil. There is back history of war between followers of the Sun and the generally evil and supernatural followers of the Moon goddess.

William King has a fair amount of dialogue. “The Flesh Stealer” has an almost detective novel banter going on between Kormak and Nuala the street walker. My guess is King read a fair number of crime novels by Hammett, Chandler, MacDonald etc. There is something to be said for the hard-boiled element in sword-and-sorcery fiction. Kormak reminded me of Gene Lancour’s Dirshan character. The Dirshan novels have no supernatural element while it is strong in King’s world.

King has well depicted secondary characters. The novella length allows some depth. He also does not fall into character cliches. When I was reading “This Way Lies Death,” I thought at first “uh, oh” with  the character of Luther, the poet noble. Then King does some things with the character that are not cliche but refreshing.

I got the Typhon Press edition through Amazon. In a more civilized age, the Kormak books would be published by Ace with Royo covers for $4.99 on a spinner rack at the grocery store.

I will be returning to Kormak periodically. You can tell William King is a pro writer. He writes for the Warhammer Universe with the well-liked Felix and Gotrek series. Sword-and-Sorcery is nourished by the talented amateur. It thrives in the hands of the competent professional.