SUPERVERSIVE: The Dark Brilliance of “A Series of Unfortunate Events”

Also, what’s up with spelling Violet’s name with two t’s?

Lemony Snicket’s (the pen name of Daniel Handler) “A Series of Unfortunate Events” is making the news again now that a new Netflix series is coming out. After the okay but ultimately disappointing movie adaptation the trailers for the Netflix series look as if they’re really going to get things right, even if Neil Patrick Harris comes across as a swing and a miss for Olaf (it seems as if the Netflix series is going to go darker than the movie, so why have a comedic actor like NPH try to pull off yet another comedic take on Count Olaf?). Quibble aside, I remain hopeful.

I want to go on the record and say that I own all thirteen books, read them all growing up, and even re-read them on occasion. The series is unbelievably clever and inventive. Snicket takes a ton of risks in the series, and nearly all of them work. The books are excellent vocabulary teachers as well; a few adults could stand to read them and learn a few new words. They are also funny in a way no other author I’ve read (with one notable exception, to be mentioned) can quite capture, a sort of grim amusement at the absurdity of life coupled alongside a delight at manipulating language in interesting ways.

“A Series of Unfortunate Events” is famous for what TV Tropes has named the “Lemony narrator” and the “Snicket warning label”. At the conclusion of almost each book in the series – especially the early books – Snicket will stop the narrative to warn the reader that he is about to read a sad and unpleasant ending, a promise he indeed delivers on as the nefarious Count Olaf escapes again and the unfortunate Baudelaire orphans are shuffled off to new guardians. It’s an entertaining use of reverse psychology to keep the reader turning the page and an excellent method of building suspense.

It’s clear in the early books that Snicket just intended to reuse that formula until he got tired of doing the series…and then he became successful, and people expected more out of him, and he realized such an approach would get old fast. So, he started building plotlines.

“A Series of Unfortunate Events” has one of the most elaborate, labyrinthine plots of any series of books you’ll ever read, adult or otherwise. By around book five or so Snicket just starts raising question after question. The plot became a hydra: Every time a question was answered, two or five or ten more popped up to take its place.

Snicket wasn’t a moron. By book twelve of thirteen he knew full well what kind of hole he had dug himself into. Indeed, he had quite a lot of fun with it, bringing back all of the old characters from previous books and having them discuss plans and secrets in cryptic ways. The labyrinthine plot is part of the reason “The Penultimate Peril” works so well.

But of course, the sword was two edged, and there was a problem – a big one. It became clearer and clearer as book thirteen went on that there was no getting out of that hole.

So Snicket copped out on the ending. He answered a total of one question – not even close to the most pressing one of the series – and leaves the fate of every major character (save for the villain and a certain Snicket sibling), including the Baudelaires, ambiguous. Then he claims that the point all along was that you’ll never know the secrets to every mystery and ends the series, smugly satisfied.

In short: He cheated.

“Wait,” you say, “I get all of that, but that just means it’s a poorly written ending. What does this have to do with not showing the books to children?”

Aha! I’m glad you asked, fictional reader. Well, this ending goes part and parcel with Snicket’s attitude at the end of the series: He doesn’t just end it ambiguously. He makes everything ambiguous, or tries to.

In the early books – even into the middle books – the cartoonish evil or incompetence of most of the characters was always a part of the joke, but there was never any doubt who was or wasn’t evil. Count Olaf and his henchmen were wicked men, unambiguously so. The Baudelaire orphans were good people, as were their friends the Quagmire triplets and several other allies they make throughout the series. The books had a moral order: Good was good, bad was bad. This is right and just, and properly superversive fiction depends on it (and all children’s books should be superversive, or at least not anti-superversive).

But then…hints start getting dropped. First, in book the eighth, “The Hostile Hospital”, Violet questions whether or not going into disguise to escape murderers or tricking someone out of a ring of keys to get into a filing cabinet, which will possibly help them save THEMSELVES from false accusations of murder, is really all that different than going into disguise to try and murder people and steal their fortune.

No, Violet, they are totally and completely different, as any idiot could see. But we forge onward…

In later books, the Baudelaires lose all faith in authority figures and strike out on their own, taking risks with secret organizations and subterfuge as opposed to trusting in the justice system or the people who were supposed to protect them. This, on its own, isn’t actually a problem, since trying to escape the clutches of a murderer or solve the mystery of why their parents were murdered is obviously completely different from murdering children in order to steal their inheritance.

One of my favorite books in the series

The problem is that Snicket stacks the deck. At one point in the second to last book, “The Penultimate Peril”, the Baudelaires are put on trial in a kangaroo court. Snicket has some fun with the phrase “Justice is blind” by blindfolding everyone in the courtroom (actually, a hotel lobby, but you get the idea). The Baudelaires, correctly, figure out that Olaf has arranged things so that no matter what happens they will be convicted; to confirm this, they take their blindfolds off. This is presented as a decision of ambiguous morality.

But we’re STILL supposed to question their decision, as if it was somehow immoral to release the blindfolds! As the trial begins, the Baudelaires also question whether or not they are “truly” innocent and call themselves only “comparatively” innocent; up to this point in the narrative, their worst crimes were minor lies to avoid being killed for a crime they didn’t commit (or kidnapped by Count Olaf).

After releasing the blindfolds, and some other adventures, the Baudelaires chase Olaf to an upper floor; there, they decide to escape with Olaf on a raft (the hotel being at the shore), when Sunny decides it is necessary to burn down the hotel as a signal to other members of a secret organization that “The last safe place was safe no more”.

Before they leave, the Baudelaires attempt to warn the other people in the hotel (who haven’t removed their blindfolds) of the impending fire, but Olaf lies to try to get them all killed, because Evil. They then escape on the raft.

Sorry for the detail here; it is a confusing but important sequence to make sense of what I’m saying. The burning down of the hotel is the first decision the Baudelaires made that is actually questionable; even then, logic would dictate that as long as they get everybody out in time, it’s not particularly bad.

The problem is – as I have said – the deck is stacked. In order to drive the Baudelaires to these choices, Snicket has to:

Do you see the issue here? The problem isn’t that the Baudelaires had to make questionable decisions, its that the author had to force the narrative – and force it in increasingly ridiculous ways –  to that point in order to get across his message. It’s VERY heavy-handed message fiction, and it’s a rotten message to boot. 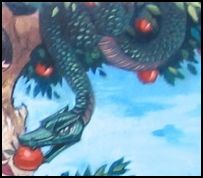 This is from the Snicket Wiki, in case you think I’d just make this up

The final book makes Snicket’s point even more explicit when – in startlingly demonic imagery – the Baudelaires’ lives are saved by a snake presenting them with an apple. A coconut vial that is used to enslave the populace (it makes sense in context, kind of) is called “The opiate of the people”, linking a literal soporific drug used to effectively enslave people with what Marx identified as religion.

The idea, of course, is that everything is mixed up; there is no right or wrong. Everybody lies, said Dr. House. The ending directly states that the Baudelaires themselves will spend their lives keeping secrets from others. The option of breaking the cycle isn’t discussed, because there is no cycle; to Snicket, lying, even to loved ones, even if for no reason accept to avoid admitting fault or guilt, is not evil, because evil is relative. Good is relative. Neither truly exists, and we’ll never find any answers to our questions.

This is an evil, evil philosophy (and “The End” is an evil book), and it’s one that children should not have shoved in their faces.

I was going to end this article here, but I got to thinking: Would the world be a better place if these books didn’t exist?

It’s an interesting question without, I think, a straightforward answer. Being old enough to appreciate the books for what they DO bring to the table and reject the ugly moral relativism underlying them, I do intend to watch the Netflix series, and I find re-reading the books to be a highly entertaining experience. Snicket is very, very good at what he does…which still doesn’t answer the question.

I think the answer is that for it to work, the series would need to be “baptized”. But what does that mean, and what would it entail?

Excellent question. Tune in next week to find out!

NEXT WEEK: Part 2: The Baptism of Lemony Snicket