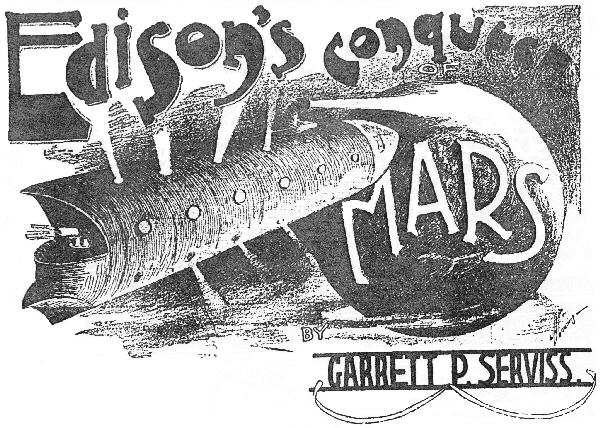 Today’s post is a guest post by Karl Gallagher, author of the critically acclaimed novel Torchsip and regular contributor to Superversive SF.

One of the earliest hard SF novels is Edison’s Conquest of Mars by Garrett Servis. It’s effectively an unauthorized sequel to HG Wells’ War of the Worlds, published in 1898. It’s actually a sequel to Fighters From Mars, an unauthorized rip-off of War of the Worlds relocating the action to America and stripping out unamerican things such as the protagonist moping about.

The author was commissioned to write it because as an astronomer he could describe how to get to Mars. And not just any astronomer. Servis was the Carl Sagan of his day, presenting a lecture series sponsored by Andrew Carnegie. He went on to write other SF novels, beginning the overlap between technical professionals and hard SF writers.

This is extremely American. The main characters are all Americans, the plot revolves about kicking the asses of those nasty aliens, and progress is made by a mix of bravery and brilliant inventions. Yes, the Edison owning the conquest is Thomas Edison, and unlike HG Wells he was consulted about the book and gave his permission to be the protagonist.

Steampunk fans may enjoy the feel of this story but there’s nothing “punk” about it. This is actual Age of Steam fiction. Diesel locomotives were just being experimented with when this was published. If you went anywhere then, a steam vehicle took you. This shows in the space battle scenes. Without any experience of aerial combat to draw on (the Wright Brothers were still making bicycles!) the battles resemble naval combat or artillery firing down from a hilltop.

While there’s lots of action in the story, the exploration and explanations dominate it. There’s a marginal pass on the Jeffro Test–while Martians are killed in anger, and a maiden rescued, all the violence is done with disintegrators or Martian heat rays, never with fists. Pulp Revolution fans will find this adventure disappointingly dry.

What this story does have is new ideas, thrilling ones providing the sense of wonder / conceptual breakthrough beloved of hard SF fans. At least it did when it was published. Most of them are now routine tropes appearing throughout SF:

Like all hard science fiction, Edison’s Conquest of Mars was vulnerable to new discoveries. As a 19th Century work just about all of its theories have been disproved. The ballistics did hold hold up, showing Servis’s astronomy background paid off.

Just about everything else is obsolete enough to make reading the novel a surreal experience. The humans analyze their Martian prisoners through phrenology (if you don’t know what that is, don’t look it up, it won’t make you happier). The disintegrators work by sending vibrations through the luminiferous ether, which Michelson and Morley were then struggling to define the motion of. Comet tails existed because of electrical repulsion. Mars had canals and intelligent life. The Moon had once supported life.

It is possible that we’ll find a solid gold asteroid someday. Doesn’t seem to be the way to bet though.

Not least of the hard SF traditions begun with Edison’s Conquest of Mars was inspiring new generations of engineers. Robert Goddard, the father of American rocketry, was sixteen when the novel was serialized. He declared it “gripped my imagination tremendously” and made him view voyages to Mars as a practical goal.

And some of those newspaper illustrations are super awesome

While the science is mostly obsolete the moral core of the story is strong. The heroes are placing themselves in danger to protect humanity as a whole. Even when demoralized by setbacks they pull themselves together to keep struggling. There’s a touch of romance and moral angst over the extremes they go to in order to win the war. But the heart of the story is the belief that cleverness, cooperation, and determination will allow good to defeat evil. Edison provides the cleverness. Humanity cooperates to provide the resources he needs. And the crews of the fleet keep fighting until they’ve won the war. This is a message of hope written before subversion became the standard for literature.

For the modern reader this novel is unlikely to be a favorite. But if you’re interested in the history of science fiction or know enough history to appreciate the story in the context of its time it’s worth checking out. Project Gutenberg has it for free, and even includes the black and white illustrations from the newspaper run.