And that, my friends, is the embodiment of cool that is Timothy Olyphant

No, “Justified” is not science fiction or fantasy.

It hasn’t really been on anybody’s radar recently.

It ended a couple of years ago now.

So why am I talking about it?

Because it is AWESOME, and nobody noticed it!

So what is “Justified”?

Well, it’s a cop show, I guess. Really a neo-western, but set in Kentucky, not the west. It’s about U.S. Marshal Raylan Givens, the coolest television character of the last twenty years (eat your heart out, Malcolm Reynolds). He’s transferred back to his hometown in Harlan County, Kentucky from FL as passive-aggressive punishment for giving a drug dealer 24 hours to get out of town before he shot him down, High Noon style. The only reason he wasn’t fired is that, as Raylan liked to clarify, “He drew first.”

There is no show currently airing that is remotely like “Justified” right now. I’m not sure there was ever a show like “Justified” before. The premise is ridiculously generic, and early on in season one, that’s how it plays out (following, admittedly, one of the greatest pilot episodes in television history). But even then, it differentiated itself in style. Raylan, played to absolute perfection by Timothy Olyphant, was just cool – A smooth-talking old-fashioned gunslinger with a western drawl and anger issues. He wasn’t really an anti-hero. He’s certainly on the side of justice and he takes on some truly cold-blooded villains, and he’s certainly not corrupt. But he’s also not somebody who made friends particularly easily either.

“Justified’s” premise came from an (excellent) Elmore Leonard short story titled “Fire in the Hole”, and true to Elmore Leonard form, it sported some of the best dialogue ever written. I really wish there were more clips on youtube, because there are almost too many classic lines to count. “Justified” has a lot of fun with the idiosyncratic ways that Southerners speak, but never in a way that feels like they’re being mocked.

Of course, as all fans of the show know, I’m tap-dancing around what really took the show from a good cop procedural in early season one to a classic from then on out: Walton Goggins, in one of the best TV performances of the decade (maybe ever), as Boyd Crowder. 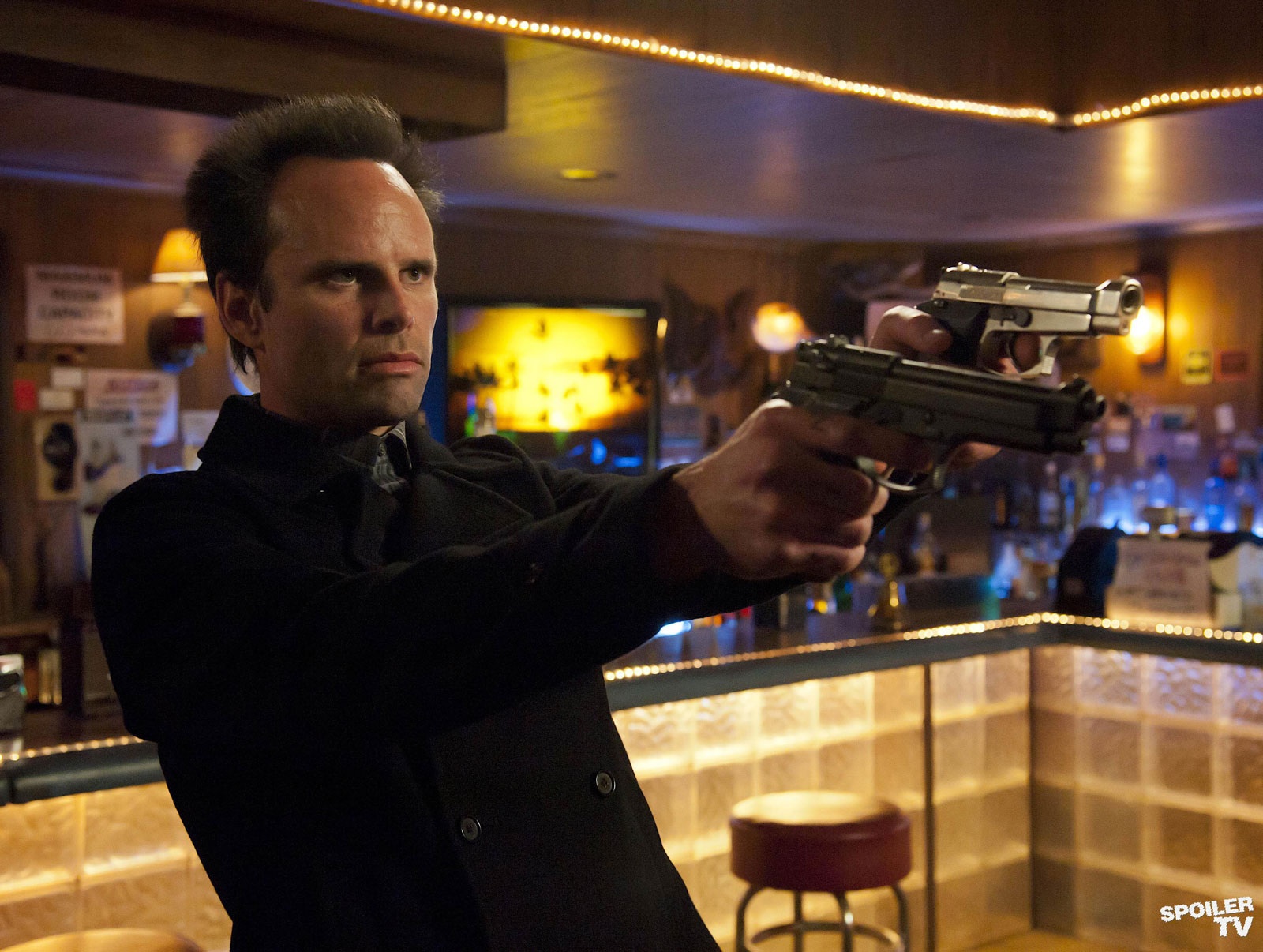 Boyd was in many ways the anti-Raylan: Both have criminal fathers, grew up in poverty, and worked in the coal mines. The difference is that Raylan devoted himself to the law as a way to escape his past, and Boyd devoted himself to…nothing. Or, perhaps everything. Over the course of the show Boyd throws in with a number of causes, ranging from neo-nazism to a heretical version of Christianity to the love of his life, Ava Crowder (played with maximum sex appeal by Joelle Carter – of the three leads she is probably the worst actor but if you can watch her in the pilot and tell me she was miscast you are a stronger man than I). And every time, it always comes back around to the most important thing in Boyd’s life: Himself.

If there’s an anti-hero in the show, Boyd is it. In season 3 especially you root for Boyd to succeed practically as much as Raylan. Boyd, like Raylan, is always the smartest man in whatever room he’s in, and like Raylan, thanks to his roots he’s always underestimated anyway. In the startlingly counter-cultural third season Northern carpetbaggers, lead by Robert Quarles (played by a deliciously evil Neil MacDonagh, in his best role to date). come into the South and attempt to take control of Harlan country, figuring the dumb hillbillies there to be an easy mark. Boyd matches them step for step and ultimately manages to use his knowledge of county law to oust the carpetbagger Sheriff from office and install his own pick. What follows is one of my favorite scenes of the entire show (Boyd is the guy with the black hair, Quarles with the blonde):

Why, you know what you are? You’re a conquistador. Only we are not your savages. And now you get to leave with your life. Well, I’m hard-pressed to remember the last outsider in your line of work can say that. I hope you’ve enjoyed your stay and you never forget who packed your bags.

“Justified” wasn’t perfect. The critical consensus is that it was only really great in the even seasons (2, 4, and 6), which is a load of crap. Season 5 was noticeably weaker (though it had some superb episodes, like “Shot All to Hell”, an oft-forgotten classic), but while season 3 was perhaps not as good as the best seasons it features two of the best episodes of the entire show in “Thick as Mud” and the finale, “Slaughterhouse”, which is so good it actually retroactively made the entire season better when taken as a whole.

Somebody REALLY pissed off Mags…

The critical consensus, again, is that the best season of the show is season 2, forever the Mags Bennett season thanks to Margo Martindale’s Emmy winning performance as the aforementioned character. And indeed, season 2 is outstanding. But fans will tell you that the high point of the series comes from season 4’s “Decoy”; in fact, the last three episodes of season 4 generally are often considered the high point of the series. And season 6 had perhaps the longest sustained run of classics (and featured one of the best plot twists I have EVER seen – I still remember literally gasping when it happened). The only flaw of that final season is the fate of a major character in the finale – without spoiling it I’ll just say that it pretty clearly supported a huge double standard for female vs. male criminals. But since what happened was in character it’s really a minor complaint.

What’s the connection with superversive?

Not much. The show ends on a very upbeat note and generally, despite some really dark moments, it’s just more fun than the “Breaking Bad’s” of the world. The very best episodes of “Breaking Bad” are difficult to watch. The very best episodes of “Justified” are a blast to watch. That’s a big difference! And there’s no question “Justified” exists in an extremely moral world. So yeah, it’s superversive. It’s the sort of basic superversive that we need more of as a rule.

But truthfully, I just wanted a chance to wax poetic about “Justified”. It’s an awesome show that more people need to become aware of, and it’s better than the vast majority of the supposed “prestige” dramas out there – not to mention way more fun to watch. It’s also an outstanding exception to Jeffro’s point vis-a-vis Southern characters in modern media. There’s truly nothing like it out there and it is missed.

In the deep dark hills of Eastern Kentucky

That’s the place where I trace my bloodline

And it’s there I read on a hillside gravestone