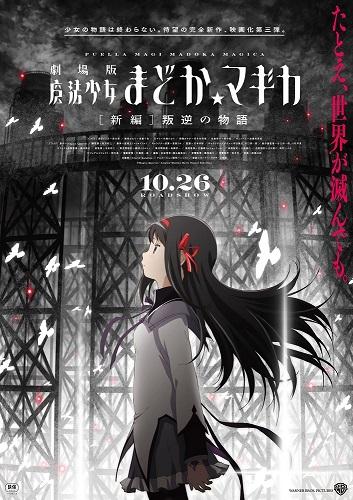 I’m not usually the kind of guy who watches magical girl shows. As a general rule I prefer my universes to be “rivets rather than magic”; I tend to like the science fiction worldview better than the fantasy worldview. (There’s something about scifi that resonates with me on a deeper level than fantasy, but that’s neither here nor there for this discussion.) And as a general rule, I tend not to gravitate towards shows aimed at women, because, well, I’m a man. But general rules always have exceptions and for me, my overriding exception is that a work that’s well written and well executed enough will earn my time regardless of premise, genre, or target audience.

This is all relevant because it’s the only way I was remotely willing to watch a show with the cumbersome and oh-so-anime title of Puella Magi Madoka Magica. The show literally had nothing to recommend it to me, besides the recommendation of an ex-girlfriend who thought I’d like it enough to run the risk of attracting my ire (for existing, y’know.) It’s a magical girl show, done in the aggravating moe (overly cutesy) style that suffuses way too much of the modern anime world. There was literally nothing that would cause me to give it a watch other than her recommendation. (Well. There is a cheerful Jpop song in the opening, and cheerful pop music is my secret shame.)  I mean, just look at some of the images in this article: It looks girlier than My Little Pony. 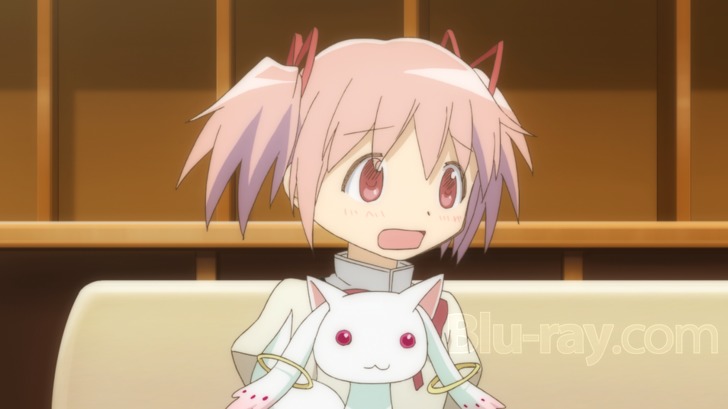 Anyway, so here’s the deal: Mitakihara is a city plagued with the appearance of witches, which tend to take the form of a malevolent entity wrapped inside a turbulent other-dimensional space. (The show typically animates the witches and their surroundings in a surrealistic and bizarre manner that sometimes calls to mind old Monty Python animations.) And who else would be tasked with combating these threats besides teens too young to drive? Anything else would be un-Japanese.

The story follows Madoka Kaname, a gentle-hearted girl plagued with frightening nightmares about the death of a strange, dark haired girl at the hands of a witch, and is understandably unsettled when the dark haired girl, Homura, shows up as a transfer student one day. Homura is pretty much a total jerk to Madoka and warns her that if she cares about her friends at all, she won’t ever try to change her lot in life. 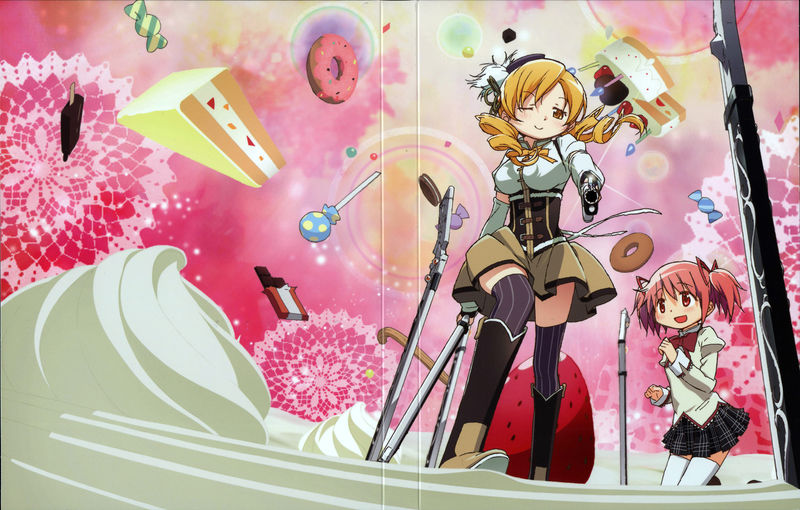 Later, Madoka finds the mysterious creature Kyubey being attacked by Homura. She and another classmate rescue him, but are shortly thereafter trapped in the appearance of a witch’s realm, only to be rescued by an upper classman who turns into a magical girl to fight the witch. Kyubey offers Madoka and her friend a contract: the girls can gain any magical power they want to have, so long as they agree to fight witches for Kyubey.

I can’t really go very much farther into it, because to say too much more would be to ruin one particular early surprise that left me sitting there kind of open-mouthed afterwards.  In the first two or three episodes, I remember thinking, “Well, this is okay. Not fantastic, but it’s okay.” In the end of the third episode, the show outs itself as something very different  and much darker than what you’d assumed. 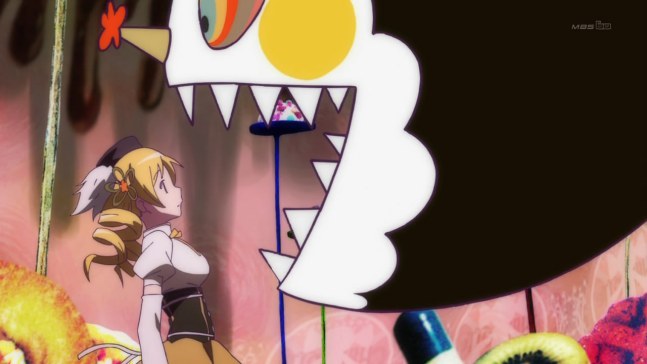 That’s the thing with Madoka Magica: The show is initially designed to troll you. The cutesy moe art style, the cheerful Jpop opening and accompanying animations, even the genre: a set of expectations are laid and the show yanks them out from under you. Maybe people who are more familiar with mahou shoujo shows weren’t as surprised, and I’m guessing if a viewer was familiar with the author (Gen Urobuchi, who has written some of the better anime in the last few years) they’d be less surprised. I’m certainly not as surprised by where he goes in the series I’ve watched since then. But I think it functions so well in Madoka Magica because the expectations are so saccharine. In a mech show like Gargantia on the Verdurous Planet, it’s not terribly surprising when things get dark; in a show full of cutesy little girls in pretty dresses, it’s pretty shocking.

I’ve described it a couple of times as the “Evangelion of magical girl shows.” And I think the key thing here is that both Evangelion and Madoka Magica address one huge, glaring issue in anime: Why would you ever give power to someone as unstable as a teenager? In Evangelion, the intial answer is that only people born after a certain date can pilot the EVA units. (Later it’s expounded upon.) In Madoka Magica, we’re confronted about halfway through with the question “Why put young girls through all this grief and danger?”

One of the dangers with a work that takes something happy and makes it dark is that it can get, well, mean. We superversive folk aren’t necessarily opposed subverion per se, but subverting or twisting genre norms frequently makes a work just seem spiteful and craptastic for the sake of craptasticness.  Madoka Magica doesn’t wallow in that. It’s dark, and it’s a little brutal, but I don’t ever remember it being mean. Instead, it’s thoughtful, and the darkness provides opposition for Madoka to struggle against as she confronts what it means to be a magical girl and the secret reason behind their existence. And at 13  20-minute episodes, it’s a relatively low-risk engagement. It’s available on DVD on Amazon or streaming on Crunchyroll.