SUPERVERSIVE: “Magi” is an awesome show and that you don’t know that is sad 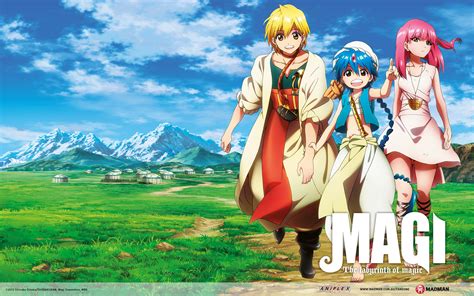 I’ve realized that unless I think the battle scenes and characters are really, REALLY awesome I actually prefer watching people deal with politics and economics. This is the exact reason “Log Horizon” is such a great show, and one of the things that makes “Fullmetal Alchemist: Brotherhood” so great are the vast background machinations going on between various semi-independent groups that may or may not be at odds with one another.

“My Hero Academia” is that rare show that has action scenes that are so awesome and characters so memorable that I’m happy with them being the focus of the show, and ditto with “Yu Yu Hakusho”. My second favorite shonen (to MHA), however, is not particularly notable for its action scenes (which are at a perfectly passable level) or its characters (which are never offensively terrible but are hit and miss in terms of memorability and creativity). What it is absolutely great at is dealing with the political machinations of its world and in making its characters act realistically within it.

This show is “Magi: The Labyrinth of Magic” and its sequel season “Magi: The Kingdom of Magic”, and it is a damn shame that they have fallen so far under the radar in recent years.One can be forgiven for thinking it’s a typical shonen action show if one only watched the first arc, or even the first two arcs (at least the second, by far the show’s weakest, is very short). It’s a fairly straightforward adventure story about quirky characters who meet up in an Arabian-inspired fantasy world and decide to run off with each other and go treasure hunting. Even so, as far as those stories go the characters are entertaining, particularly Ali Baba, who soon becomes the most interesting and complex character in the entire show, and one of my all-time favorite anime characters. The action is fun.

And there are points of interest even here. “Magi” does an admirable job of not whitewashing the horrors of the Arab world while at the same time making its appeal clear. The world is beautiful, atmospheric, and has an air of adventure, but the social systems are cruel and suffering is commonplace. Ali Baba himself fluctuates wildly between bravery and cowardice in a way not really common among protagonists in shonen shows, and the hints at his mysterious backstory are well-placed.

The second arc unfortunately moves away from Ali Baba and focuses on Aladdin, a cheerful 12 year old and the titular magi, which at this point as far as we know means he has especially strong magic powers and is friends with a genie. This arc is easily the worst of the show, focusing on Aladdin’s relationship with a small tribe of desert people who find themselves suddenly at odds with the massive Koh Empire, a growing world power with the goal of eventually getting, through force or otherwise, the entire known world under their thumb. The main thing to take out of this arc is the introduction of the Koh Empire, an explanation of the show’s magic system, and the show’s running theme of the perils of globalism that make the show especially timely. Outside of that, the best I can say about this arc is that it’s mercifully brief.

In between this is an arc following the character of Morgiana. I’ll get to this later.

Luckily, it is after this that the show REALLY hits its stride. What follows is the Fog Troupe arc, and I think I can honestly say that it’s one of my favorite arcs in any anime ever. Aladdin returns to the kingdom of Balbadd to meet up with Ali Baba and passes through the kingdom of Sindria, lead by Sinbad. Yes, this is THE Sinbad the Sailor. Magi makes the interesting decision to have our characters find Sinbad when he is already a powerful and well-established king (there would eventually be a prequel series about the rise of Sinbad that was entertaining enough). Aladdin decides to travel with Sinbad, who is on his way to Balbadd himself to deal with a mysterious group known as the Fog Troupe that have been robbing his merchants.

And it is there that Aladdin and Sinbad discover the shocking truth behind the Fog Troupe’s shadowy leader, a discovery that leads to a chain of events that rapidly spiral out of control. 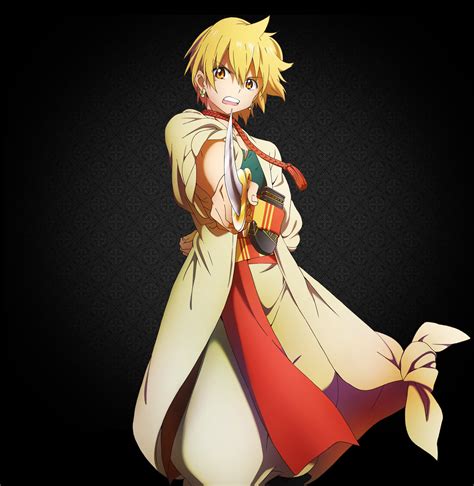 Right. In terms of summary I’m going to stop here. It is from this point on that the show moves from “Good” to “Great”. The Fog Troupe arc delves deep into the difficult political situation in Balbadd, the difficulties inherent in finding ways to deal with it, the decisions made by other nations when they notice the quickly unraveling stability of the nation, and the backstory of Ali Baba and how that affects his actions. Interspersed in this are some truly stellar battle scenes. Ali Baba comes into his own as an outstanding character, one of the only ones I’ve ever seen who is capable of carrying both entirely comedic and entirely dramatic roles in the narrative equally well. In fact, the only other character I can think of with that ability is Vash the Stampede. Now that’s good company!

The very best thing I can say about the Fog Troupe arc is that the show manages to maintain this level of quality, or close to it, for the entire rest of its run! Season 2 actually leaves Ali Baba behind for the majority of it but the complex social structures it explores along with the behind scenes machinations of the various competing nations makes it damn near just as compelling as the best parts of season 1, and sometimes even more so.

I mentioned above that I would get to Morgiana, and I will. Morgiana is a somewhat unusual character in that she doesn’t actually HAVE to be involved in anything going on but continually makes the decision to join our other protagonists of her own accord. Freed from slavery by Ali Baba despite the fact that she also tried to kill him under the orders of her master in the show’s first arc, Morgiana’s original goal is to return to her people’s homeland but she eventually comes to the conclusion that she owes too much to Ali Baba to leave him behind in the middle of such a huge crisis.

I could summarize a lot of the show without mentioning her but I decided to bring her up here because I would be doing her a disservice if she was never mentioned. Morgiana is a great character. Her personality is actually interesting! She plays a distinctly feminine role in the narrative as support for the male leads, and acts incredibly grateful to them because of her kindness. She is essentially superpowered due to her race, which is what makes her so valuable as a slave, but she uses that power always in service to others. Her character arc partially plays out in a separate arc but it is very well-handled. Her scenes also tend to be very fun – because of her powers the animation tends to be very on point when she gets the spotlight (take a particular look at her animation in the first OP, because wow).

She also has one of the most interesting character designs I’ve seen yet for an anime heroine. She is supposed to be a foreigner and she actually looks like a foreigner. She’s pretty, but there is something slightly unconventional about her appearance that really makes her stand out amongst the rest of the cast in the best possible way. The actress also manages to somehow make her actually sound like a former slave – there is a sort of quietness to her voice that gives the impression she is unused to voicing her own opinions or expressing strong emotions. This is a credit to the English voice actress, who does an excellent job imbuing the character with a unique personality.

I really wish I could talk more about the specifics of what makes the show great, but for once I don’t want to spoil things. When it explores the complex social and class-based differences that lead to the chaotic and dangerously tyrannical structures of the various governments it does so without forgetting that there are multiple parties involved, that even the underclass aren’t necessarily blameless when it comes to their circumstances, and that the line between oppressor and oppressed is far less black and white than it originally appears. And yet it does all of this without ever compromising on the idea that good and evil exist and it is our duty to do good. That a shonen action show manages to explore ideas in such depth while still managing to feel like a shonen action show is incredibly impressive.

There isn’t much else to say about the show except, I suppose, that it’s very pleasant. The show benefits greatly from scenes where the characters just hang out with each other. It makes their relationships feel realistic, and their comradery feel earned. This helps a lot when the main cast gets separated for any length of time. They can meet up and hit it off immediately without anyone feeling like they missed anything.

If I had one comparison to make of the show, I would call it a somewhat inferior version of “Fullmetal Alchemist: Brotherhood”, and since I consider “Brotherhood” one of the greatest shows of all time this is still a very high compliment. It breaks a lot of interesting ground for a shonen in the complexity of its international and social politics.

Unfortunately I think its first two arcs got it to slip under the radar a bit, and that’s really a shame. After I finished season 2 (and the fun if rather slight prequel “The Adventures of Sinbad the Sailor”) I actually went and found the manga because I was so excited to continue the story, and so far I definitely haven’t been disappointed.

This is a true hidden gem and one of my favorite anime ever, and I highly recommend it…if only to drum up enough interest for a season 3!

The dub is really excellent, especially the voices of Ali Baba and Morgiana, who manage to cover an impressive amount of range. If you look for that sort of thing this one is definitely worth it.

Every OP and even ED is killer in this show, though my personal favorites are the first ones of each.