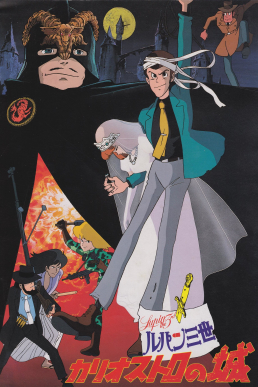 The Miyazaki Retrospective is nearly over. Spreading across three different websites and multiple authors, I’ve had a lot of fun using this semi-plausible excuse to go through the oeuvre of one of the great animators of all time. At this point, with only two films to go, we’ll go back to the beginning and take a look at Miyazaki’s very first film, “The Castle of Cagliostro”.

I think it’s safe to say that “Cagliostro” is one of (“Porco Rosso” is overlooked a lot) Miyazaki’s least famous films, at least in the states (in Japan its status as part of a popular franchise may bolster its fame somewhat). It is one of only two movies Miyazaki directed before Studio Ghibli’s founding (“Nausicaa of the Valley of the Wind”, the other film, was retroactively folded into the canon later on besides)., and unlike his other films, Miyazaki was playing around in an already well-trod sandbox. While he did write and direct the film it is true that he was working with much less creative freedom than ever happened later in his career.

“Cagliostro” did not do particularly well monetarily when it came out, and though critics liked it fans of Lupin III initially took it poorly. Miyazaki had a very “light and soft” take on the characters that didn’t really fit their traditional portrayal, and some fans were understandably upset about this. Despite this limitation the movie has since been regarded as a minor classic (this is true of at least half of Miyazaki’s films, if not all of them), and is almost universally considered the best feature film of the Lupin III franchise.

“Cagliostro” does feature a lot of classic Miyazaki themes and motifs – we have castles (this is the first of Miyazaki’s “castle trilogy” of films), flying (all of his films so far but “Ponyo”), fairy tales (“Castle in the Sky”,”Howl’s Moving Castle”), terrific action sequences (like, everything but his young children films), and, of course, a happy ending (a trend he bucked only in “The Wind Rises”, sorta kinda).

It differs in that it’s probably the most “shallow” of Miyazaki’s films. In all of his films – even lighter fare like “My Neighbor Totoro” and “Kiki’s Delivery Service” – there’s a deeper layer of meaning. “Porco Rosso” is a comedy, and a very funny one at that, but there are themes about war and fascism and honor and all sorts of stuff bubbling underneath the surface that change the movie into something just a little bit more meaningful than a funny story about a flying pig.

“The Castle of Cagliostro”…well, it doesn’t really have that. Oh, I’m sure some of the film’s hardcore fans can probably point out subtle political or thematic points Miyazaki tries to dig up throughout the film, but when you compare this film to his next action adventure, the superior “Castle in the Sky”, it becomes pretty clear that “Cagliostro” lacks…something. 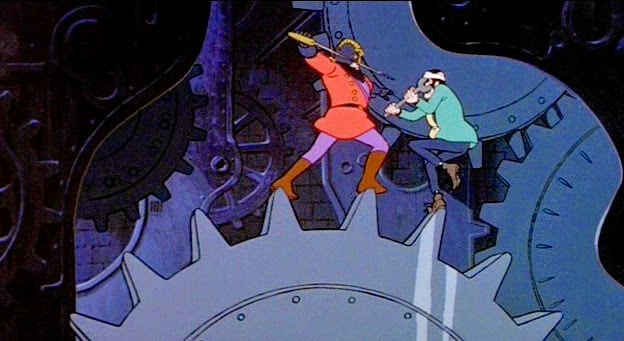 “Cagliostro” is a very good movie, and a movie I’ll probably end up rewatching some day. It has excellent action scenes, some rightfully gaining fame in their own right (the clocktower scene at the end of the film – if you watch it, you’ll know what I mean – ended up being directly homaged in the underrated Disney flick “The Great Mouse Detective”), and a scene at a marriage that is one of the coolest I’ve watched in a long time. But it’s all flash. It’s not true to say that the film has no heart; Miyazaki gives Lupin a couple of nice scenes with Clarisse, the female lead, that give context to his actions and gives the character some pathos. But it feels like what it is – an excuse. It’s not a part of Lupin’s world, and it’s not real. We know that when Lupin leaves, he’s not really going to think of Clarisse much anymore, and we know that the motivation is besides the point of the story; the REAL point of the story is to watch Lupin beat the bad guy in a seriously cool way, which he does! But while it’s certainly important to be fun, the movie doesn’t stick with you like movies such as “Howl’s Moving Castle” or “Spirited Away” do; it’s all style and no substance.

As I refresh myself on the plot, it becomes more and more clear to me that “Cagliostro” functioned in a big way as a testing ground for ideas Miyazaki utilized with more success in “Castle in the Sky”. So many elements are shockingly similar – the Princess with a magical macguffin, a mustache-twirlingly evil villain, a fairy tale motif, castles (of course), and even the plot device of the Princess giving herself up to the villain in order to save the hero. But the big differences are that Miyazaki took only the best elements to create a much cleaner story in “Castle in the Sky”, and that given the chance to create his own universe Miyazaki chose to create something much more overtly superversive. Love might be an afterthought in the universe of Lupin III (so much so that Miyazaki was accused of making it TOO sentimental!), but in the world of “Castle in the Sky”, it is central to everything that happens, culminating in the scene at the end where Sheeta outright tells Colonel Muhska that it was pretty much the point the whole time. And though it might seem like a subtle thing, it makes a very noticeable difference.

If you get the chance, watch “The Castle of Cagliostro” (if you’re a dub guy, it has two that are both said to be pretty good; I watched the Slipstream dub and can confirm at least that the voice acting is pretty excellent). It’s a really fun movie, with amusing characters and some terrific action setpieces. It is very recognizable as proto-Miyazaki. But most importantly, it’s a sign of even greater things to come.