SUPERVERSIVE: Mob of “Mob Psycho 100” is the hero we need

So I guess I’m officially a fan of One, creator of the excellent “One Punch Man”. I recently finished his OTHER big series, “Mob Psycho 100”, and to my surprise it was actually, somehow, even better. There characters were more fun, the plot was more intelligent, and the jokes…well they’re great in both shows, but still, they’re pretty great.

Mob Psycho 100 is the story of Mob, a diminutive Japanese middle schooler with incredible psychic powers. He’s the apprentice of Reigen, the owner of the Psychic…Consulting?…agency Spirits and Such, and a complete fraud, who nevertheless has convinced Mob of his amazing psychic acumen.

Mob is clearly autistic (a marker I am always hesitant to use as a descriptor for merely “weird” characters but which seems to genuinely fit Mob to a tee). He is a wimpy, tiny, and weak. He lacks the most basic of social skills, has no idea how to talk to people, and is picked on when people bother to notice him at all, unless it’s because of his psychic ability.

And this is why Mob is the best.

The modern trend, especially in left-leaning media, is all about acceptance. If Elsa just accepted who she was, she’d be able to control her ice powers (despite having no training). If Ezra of “Fantastic Beasts and Where to Find Them” was just accepted, he wouldn’t explode at people and become a dangerous monster. If the folks of the Guardians of the Galaxy were just accepted and given a home, you’d see they’re really not bad people after all. Acceptance has become the magic bullet fixing all that ails us; the reason why people particularly like this trope is hopefully obvious enough that I don’t need to spell it out.

This is, of course, an incredibly unhealthy and even dangerous attitude. The fat acceptance movement is just one but perhaps the most obvious example of why this is the case. Of course it isn’t just “okay” to be fat; it is not only unhealthy but also as a rule will make you look less attractive to the majority of the population, whatever you might WISH to be the case or how unfair that is. Acceptance is far too often used as an excuse to avoid self-improvement.

And this is why Mob is the hero we need. Everything Mob does throughout the show is geared away from acceptance and towards self-improvement and responsibility. When we flash back to young Mob’s first meeting with Reigen we learn that their partnership exists because Mob looked to Reigen for help handling his powers, and took his lessons of humility and responsibility seriously, turning them into a life creed. Even as a child, Mob is never passive; he always looks for ways to improve. 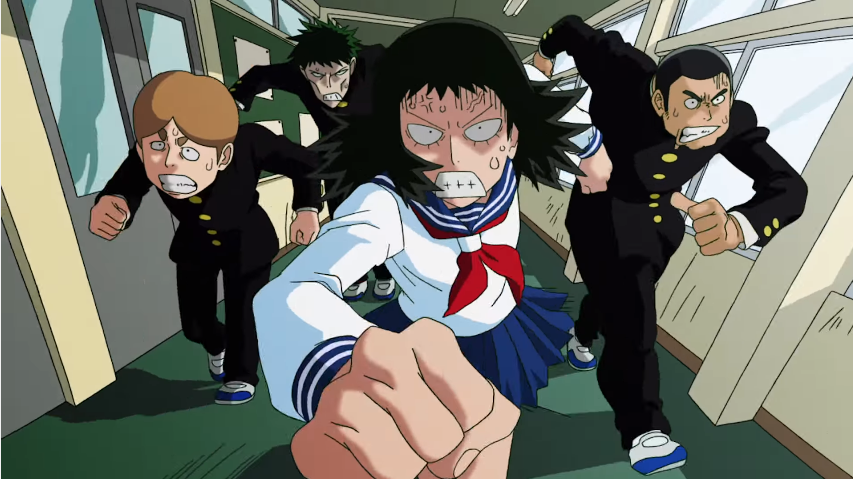 This is punctuated most clearly in the Telepathy Club arc, one of the best things the show has done so far. The story goes that the telepathy club, run by one genuine telepathy fangirl and a bunch of kids who just want to slack off at the end of the day, is going to be shut down unless they can find one more member by the end of the next school day. Enter Mob, who of course is an actual telepath.

The fangirl leader begs and pleads with Mob to join the club, and I’m going to pause here to note how this story is supposed to go (and the show specifically sets it up to make it LOOK like it’s going to go this way). Mob is going to hem and haw and maybe initially refuse but, won over by the fangirl’s enthusiasm and pleading, and moved by the Student Council’s dastardly attempt to take their club, he’s going to join in and find that with an ersatz family of like-minded individuals who accept him as one of their own he’s free to just be himself. And they all went on wacky adventures and lived happily ever after.

That’s how the story is supposed to go. But that isn’t the choice Mob makes. Faced at last with the opportunity to save the telepathy club from the jaws of death, he joins…the Body Improvement Club.

And this was the moment Mob became really awesome. Because Mob is a wimpy nerd with no social skills, but he knows that, and instead of stuffing himself inside of a niche surrounded by yes men willing to validate his neuroses he actively makes a decision to work and improve, and that is exactly where we see him at the end of season 1 – still a part of the Body Improvement Club (who, incidentally, are also great, supportive and helpful, as they almost certainly would be in real life). And it’s not just limited to this decision – he also makes active attempts to engage with the outside world, broaden his interests, and improve his social skills.

This is the exact sort of counter-cultural message our society so desperately needs right now. And Mob, autistic, wimpy loser that he is, is the man for the job.

WRITER’S NOTE: I learned later that the critic Digibro, who I quite like, already made a similar point in the following video, though his bone to pick is not with “Acceptance is the answer to all your problems” but rather with wish fulfillment characters like Kirito of “Sword Art Online”. Also worth a look: