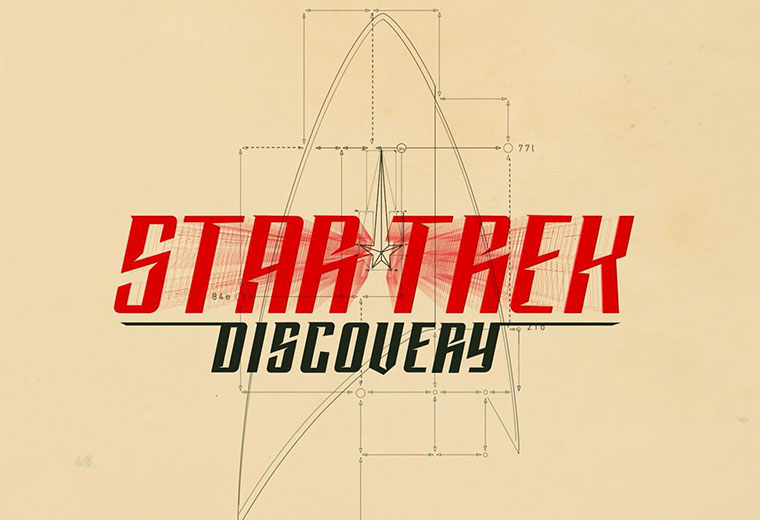 It’s basically a given at this point that any entry in a long running franchise is going to generate a lot of emotional turmoil. Some of us are happy to return to a beloved universe. Some of us are angry that people would dare. Most of us are afraid of how they’re going to screw up the beloved franchise. Most of us, I think, want our franchise to move forward, and the people who are in charge of those franchises are determined to play it safe– or what they perceive as safe. Prequels, prequels everywhere! Brave persons of color! Womyn in charge! Shamelessly mine the canon where you need to, toss it out where it constrains you!

As a kid who grew up with Star Trek, the initial announcement of Star Trek Discovery thrilled me. We’ve had our ups and downs, the franchise and I, but the sight of that Starfleet arrowhead filled me excitement. And then… nothing. Nothing for a very long time, beyond rumors of trouble. When the first glimpse of the ship came through, it was an idea that’s clever on paper (What if we took the unused Ralph McQuarrie redesign of the Enterprise and made that our ship?) and just… didn’t work. Star Trek’s leading ladies have always been the ships, and they’ve almost always been beautiful, but Discovery made the NuTrek Enterprise look graceful. When “plot” details were revealed, they were basically things like “We have a gay couple!” and “Our lead is a woman of color! The first black lead in a Star Trek series!” (She’s not.) Things started to look worse and worse, and then CBS made the decision to release it on Netflix everywhere except the US, where we’d have to pay for CBS’ streaming service…. Well, I decided to ignore it.

Until CBS offered the service free for a month. Nine episodes and a month to watch them? No problem.

Star Trek Discovery follows Michael Burnham, a foster child of Sarek and Amanda, raised on Vulcan, now a Starfleet officer. When the series opens, she’s the first office aboard the USS Shenzou, under the command of Capt Phillipa (Michelle Yeoh), when they run across Klingons for the first time in decades.  Burnham tries to convince Phillipa to lead by opening fire on the Klingons (which the Vulcans did for centuries after their first disastrous encounter), and when her Captain refuses, she uses the world’s least effective nerve pinch (Maybe because Burnham is human? Maybe because Michelle Yeoh is awesome?) to incapacitate the woman just long enough to start her mutiny. Long story short, war with the Klingons starts, Phillipa’s killed, Burnham is sentenced to life in prison, and most of the survivors of from the Shenzou are reassigned to the Discovery, a research vessel.

Discovery is a testbed for a new sort of FTL, a “spore drive” that uses the spores of some sort of transdimensional fungus to jump instantaneously from place to place, and for reasons of plot, her commander, one Capt. Lorca, wants Burnham onboard to help weaponize both it and a giant, transdimensional space tardigrade that feeds on the fungus spores when it’s not busy slaughtering people who are trying to slaughter it first. It goes without saying that the the ability to jump to any point in the universe is highly useful in a war, and Discovery, despite being a nominal research vessel, becomes the keystone in the Federation’s offensive. (But let’s be honest: Starfleet is always spouting that “We’re not a military” BS when every single one of their ships is armed to the teeth.) 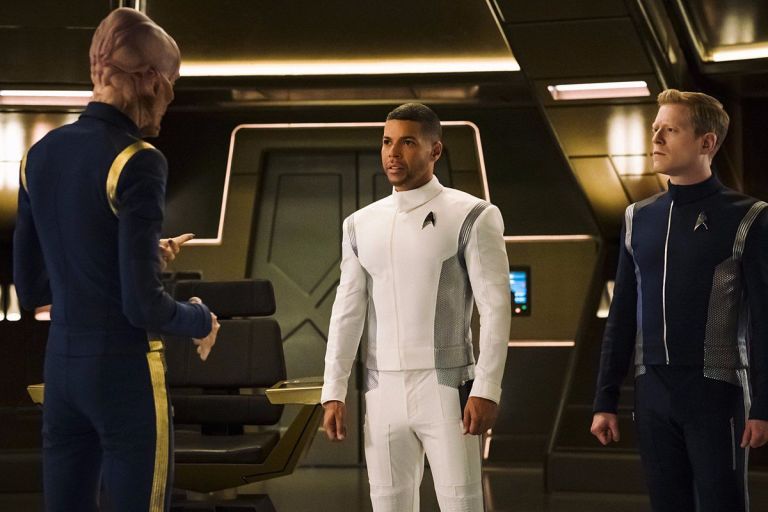 “I’m a homosexual Lego man! How diverse are we!”

So how is the show? I’ll be honest. I was prepared to hate it, and the part of me that was hoping for some schadenfreude is kind of disappointed to find out that I don’t. The show is not without its flaws. It really bugs me that this Starfleet visually looks nothing like the Pike-era Starfleet, despite being roughly contemporary. It bugs me that the Klingons were redesigned as much as they were, even though it’s not the first time that’s happened. It bugs me that we had to give Spock a foster-sister, who is so Vulcan that Sarek, of all people, has to chide her for her lack of courtesy. There’s a random F-bomb in one episode; Klingon nipples in another.  Harry Mudd shows up, but he’s more of a sociopath than a lovable con-man. Michelle Yeoh was underused. Captain Lorca is kind of unhinged.  The actor who plays one half of the aforementioned gay couple is actually really fantastic, but the other actor is ridiculously off-putting, with fewer points of articulation than a Lego man, and seems to have been hired for his ability to give off “I’m gay!” vibes. And, irritatingly, a lot of these issues (at least the story ones) could be fixed by making Discovery  post-Voyager, or by doing things like having Burnham fostered by a different Vulcan. It really didn’t have to be Sarek.

In spite of all that, I found myself surprisingly entertained. I’m not bothered by the silliness of the spore-drive: Star Trek likes to pretend it loves science, but it really just sort of smears itself with science jelly as a sort of mating ritual. The fact that the spore drive doesn’t appear anywhere else in Star Trek just suggests to me that something is going to go horribly awry with it (and the midseason finale certainly points that way). The story told is compelling in spite of the occasional times it shouts, “Then this happened, because of plot!”

Doug Jones, as always, does a fantastic job when decked out in 7,000 pounds of makeup; the man is the practical effects version of Andy Serkis. Discovery herself isn’t entirely hideous (although the spinning saucer section during spore jumps is ridiculous). The story of what I can only assume is a ultimately fatally flawed super weapon in the hands of the good guys, vs. the Klingon superweapon (cloaks), is at least interesting enough to carry us through multiple episodes. I’m not bored by it.

Weirdly, I feel like Discovery hasn’t completely lost the soul of Star Trek (Though The Orville remains the Trekier Trek). There’s a trick I use for making Star Trek Voyager‘s adventures in incompetence palatable: Not every ship in the fleet is the Enterprise. Not every captain is competent. Voyager was the story of a ship that disappeared and provided an adventure of the week for Picard or Sisko in the form of investigating its disturbance. A similar construct seems to have formed in my head for Discovery: Not every captain is a good man. Discovery is the story of a captain who is eventually going to go rogue, and provide the adventure of the week for Kirk, when he has to fight a famed and decorated former Starfleet officer.

Star Trek Discovery is balanced on the blade of knife, and it could fall any way. It could give in completely to the modern love of grimdark subversion; or it could struggle its way out from under the weight of its the less than stellar hand its creators dealt it to become something genuinely good– you can see hints of a great show here and there. (Notably, the episode “Magic to Make the Sanest Man Go Mad,” and in particular, the last five minutes of it.) One thing I have to wonder is if this show had been named anything else, if the Federation had been “the Republic” and the Klingons “Snorfblats,” if it might not have been a much more highly regarded show. The name might carry power, but with that power comes expectations.

I’m still pretty ticked about not having it on Netflix, though.

Joshua M. Young is  an underemployed theologian, sci-fi author (featured in Tales of the Once and Future King, Forbidden Thoughts, and author of the forthcoming novel Do Buddhas Dream of Enlightened Sheep) and blogger at Superversivesf.com. He can be reached on Gab.ai and Twitter @BadgerSensei. If you enjoyed this, we’d love to have you visit our main site!