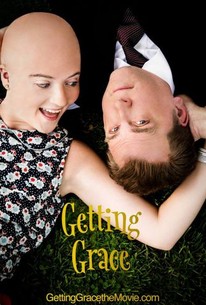 I was in between giving my review for this film and “Kill La Kill” (talk about diverse options!), but considering that we are now in the middle of Easter week, I think this film is appropriate.

“Getting Grace” is the story of Grace, played by newcomer Madelyn Dundon, a teenage girl with terminal cancer who decides that as her final project before she dies she’s going to find her mother a man – she doesn’t say this in so many words, but it’s made clear through her actions in the film. In her crosshairs are Bill, the stuffed shirt funeral director played by Daniel Roebuck, Ron, a new age author/guru who writes books about spoon-bending, and the Episcopalian Priest Reverend Osburn…though she sets her sights on Bill quickly enough.

Before I go further, I just want to copy the dedication of “Tales of the Once and Future King” onto here:

This book is dedicated to Mrs. Kristen Dundon

I have known the Dundons since high school (Mrs. Dundon is the star of the film’s mother), and Mrs. Dundon directed the first play I have ever performed in. I have visited their house. So I am necessarily going to be biased here.

And while I call Madelyn Dundon a newcomer, and she is to film, anybody who has watched her from her middle school career onward could have told you she was a born star. Miss Dundon plays the title role and her performance can only be described as a tour de force. She runs the full emotional gamut from guilt to elation, despair to triumph, humor to heartbreak. She shines in every scene she’s in, and is the star performer in a film full of high-quality performances. Her first major role is in every sense a triumph.

“Getting Grace” is a movie about faith. Grace knows she is going to die and has accepted it; the only thing she can do now is help the people around her accept it as well, and accept that even with her gone, life goes on. She knows there is nothing left for her and so lives her life for others. The dialogue in the film is sharp as a samurai sword, clever, fast-moving, and when it wants to be absolutely heartbreaking. “Getting Grace” is very funny – weird as that may sound, it’s absolutely true – but terribly sad as well, naturally, and not just because of Grace’s death. A storyline with her friend, a young girl named Audrey (played by another newcomer named Alexa Mcfillin, who puts on an excellent performance), is a real tearjerker, but never in a manipulative way. Everything that happens happens with a purpose, to drive home a particular point or explore a particular idea. It’s an extremely well-constructed film.

Ultimately “Getting Grace” is a paradox. It puts the last days of a teenage girl under a microscope but by doing so ends up being a celebration of life. It is a difficult movie to watch, but if you make the decision to go see it, it will be one of the most meaningful movie experiences of the year – perhaps several years, considering the state of Hollywood today.