This poster is sweet

Well, that was…definitely an experience.

I have no idea what to make of “Kill la Kill”, an anime about evil clothing and the naked men and women who fight them.

Synopsis: Get ready, because this one is convoluted. “Kill la Kill” is the story of Ryuko, who has enrolled in the prestigious but terrifyingly fascistic Hannouji Academy, ruled under the iron fist of Student Council President Lady Satsuki. At Hannouji Academy status is conferred based on the rank of your Goku uniform, special uniforms that give the wearers special powers. Ryuko, armed with a mysterious half-scissor blade, is determined to take on Lady Satsuki and figure out the truth behind her father’s murder. To do so she’ll need the help of Senketsu, a sentient uniform that makes her especially powerful by feeding on her blood. During her quest she figures out a conspiracy surrounding the uniforms and gets embroiled in a plot to take down evil clothing before they destroy the human race once and for all.

Ryuko, Senketsu, and her scissor blade

Review: I am having a lot of difficulty figuring out what to say about this one. The Kill La Kill team is almost the same as the team that made Gurren Lagann, and it shows in a sort of insane zest for life and crazed enthusiasm that runs through the show. That, at least, is infectious.

I don’t think it’s as good as Gurren Lagann though. Gurren Lagann had a structure, starting off…not small compared to most things, but comparatively small, and slowly increasing in scope and scale as the show went on until we got to our finale where punches were as powerful as the big band and galaxies were being used as shruiken. Kill La Kill starts at a 12 of 10, and while the show technically does get bigger in scope I don’t really think the craziness increases in any meaningful way, because it’s already completely bonkers. There isn’t as strong of a structure as Gurren Lagann, nor does it have GL’s sense of pacing.

The characters are memorable and leave impressions, and they certainly do change and progress as the story moves forward, but they’re not as well-conceived and finely drawn as the characters in GL, which had outstanding character development.

As far as how the show stands on its own…look, I really meant it when I said I had no idea what to make of it. It has its own style. It has memorable characters. I like the art style too. It’s just…weird. Really, really weird. And not in a way that feels fresh or interesting, just…weird.

Like, why does this even exist? The naked people, the powers of clothes, the incest and lesbianism…why? What are they trying to get across here? And some of the gags are just uncomfortable, like Ryuko’s friend Mako’s creepy father and brother who keep trying to sneak looks at Ryuko naked. 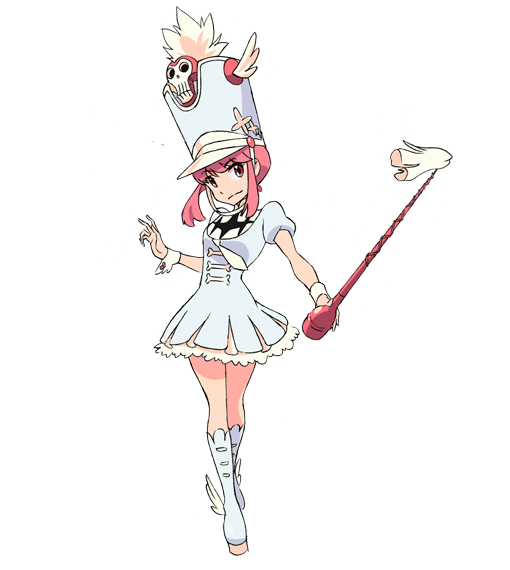 Nonon Jakuzure in her symphony regalia. She gets the best battle in the series for my money.

I suppose I’m glad it exists in the end. The weirdness did create some truly memorable scenes and episodes. There are two episodes in particular I found outstanding, the episode where Ryuko and Mako go on a quest to reach their school before their names are called in homeroom, a truly masterful display of utter insanity. And the episode where Ryuko goes up against the head of the school band in single combat featured a creative and highly entertaining music-themed. Some of the plot twists were even pretty clever.

So it could definitely be a lot of fun. I’m just not sure how well it works as a whole package.

Overall rating: ????? out of 10 stars. You really just need to decide for yourself if this sort of insanity is the type of thing up your alley. Sorry I can’t properly commit to this one, I suppose.

By the way, this theme song is second only to “Tank” on my personal favorites list.