SUPERVERSIVE: So You Made It Into Hufflepuff

Hello again, and Happy Superversive Tuesday! To continue my theme from last post, I’m going to talk about something completely different. Something personal. Namely…

J.K. Rowling’s Pottermore site has sorted me into Hufflepuff.

Hufflepuff is noteworthy in the Harry Potter series for being supremely un-noteworthy (“A Very Potter Musical” famously lampshades this after the end of its opening number “Gotta Get Back to Hogwarts” with the immortal line “What the hell is a Hufflepuff?”). The Hufflepuff we know the best is Cedric Diggory. Diggory is a fine character, but he probably doesn’t even rank in the series’ top twenty most interesting. Even in “Goblet of Fire” we just don’t learn that much about him, except that he’s apparently an honorable man, a hard worker, and a capable wizard. Besides that – nothing.

So far, this all sounds reasonable, and fits into Rowling’s world well. Patient, kind, honest, hard-working, and just are all the sorts of non-flashy qualities that could theoretically give Hufflepuff the reputation as the “loser” house, but unfairly. They’re not flashy, but they’re good qualities to have. The world is a better place for them. They’re the types of qualities I tend to admire even if I don’t have all of them myself (all of my friends who see the word “kind” on this list are laughing right about now).

Don’t get me wrong – I value bravery, intelligence, and…okay, I don’t value Slytherin. Ambition, I guess? I’m not ambitious. But those other two! I just think that the sorts of qualities Hufflepuff House supposedly represents don’t get the respect they really deserve. Kindness is underrated.

So, I’d be quite pleased with my pick as a Hufflepuff House member….If not for this, from the book five Sorting Hat song:

And those of sharpest mind

Were taught by Ravenclaw

While the bravest and the boldest

Good Hufflepuff, she took the rest,

And taught them all she knew,

Thus the Houses and their founders

“She took the rest”

“She took the rest”

We’ve hit, by the way, on the biggest flaw of Rowling’s House system. She pays lip service to people overcoming the expectations set by the house they’re sorted in, but in reality characters who are part of Slytherin are evil, characters who are in Gryffindor are good, and the middle two houses don’t matter. Rowling at least has the decency to add in Luna Lovegood, a Ravenclaw and one of the series’ most interesting and beloved characters, but in Hufflepuff…well, there’s Tonks. Except that we’re never actually told Tonks is a Hufflepuff until after the series is over. And let’s not even get into all of the problems with Rowling’s portrayal of Slytherin House.

Perhaps the worst line in the entire series comes from one of the best chapters in the series, “The Prince’s Tale” from Deathly Hallows. Dumbledore is talking to Snape about Voldemort’s impending return:

[Snape said] “Karkaroff’s Mark is becoming darker too. He is panicking, he fears retribution; you know how much help he gave the Ministry after the Dark Lord fell.” Snape looked sideways at Dumbeldore’s crooked-nosed profile. “Karkaroff intends to flee if the Mark burns.”

“Does he?” said Dumbledore softly, as Fleur Delacour and Roger Davies came giggling in from the grounds. “And are you tempted to join him?”

“No,” said Snape, his black eyes upon Fleur’s and Roger’s retreating figures. “I am not such a coward.”

“No,” agreed Dumbledore. “You are a braver man by far than Igor Karkaroff. You know, I think sometimes we Sort too soon….”

There you have it. One of our three semi-sort-of-kind-of heroic Slytherins in the series (along with Narcissa and Draco Malfoy – four if you count Regulus Black) is told that he is too heroic to be a Slytherin. Rowling’s utter contempt for Slytherin House couldn’t be any clearer.

Rowling also has an unfortunate tendency to shoehorn characters in where they don’t belong to fit her pre-ordained roles for each House. Take Remus Lupin. Lupin is a Gryffindor, but…come on. Remus is clearly a Hufflepuff. He is kind, he is a diligent worker, patient with students (and Snape), and unflinchingly loyal, literally to a fault. Sure, he does lie to Dumbledore a couple of times, but ultimately his guilt lead him to confessing both times, and in any case I don’t think this really does any more to disqualify him from Hufflepuff House than being too afraid to call out his friends’ bullying behavior or tell Dumbledore his suspicions about Sirius Black disqualify him from being a Gryffindor.

Remus is certainly brave. But when you think of the qualities that most define Remus Lupin, you think of his kindness towards Harry and his steadfast loyalty to his friends, his two most admirable traits. You don’t think of his bravery. Remus Lupin very obviously should have been a Hufflepuff. He even marries a Hufflepuff. The problem is that this wouldn’t work in Rowling’s world, because Remus is friends with James. In the Potterverse somebody who became James Potter’s best friend had to be a Gryffindor.

From another perspective, Luna Lovegood can be a Ravenclaw, but Hermione Granger cannot be, because it destroys Rowling’s concept of Gryffindor as the house with all of the most important positive characters.

Book five is where Rowling finally admits all of this. She doesn’t even attempt to give the Slytherins positive traits (pure-blooded and cunning?), and by the time she reaches Hufflepuff she admits what has always been the implication and flat-out states that it’s the reject house, for the people too unexceptional to go anywhere else. It’s gym class all over again: These are the students who weren’t picked for dodgeball.

What’s disappointing is that there’s no real reason Rowling had to go in this direction. Remus could have been a Hufflepuff. Warrington, the Slytherin, instead of Cedric could have been the Triwizard Champion, giving Slytherin House much more nuance if Rowling decided to portray him as something other than a pure villain. Slytherin as the house for the ambitious and crafty (people who are creative problem solvers and who always manage to land in advantageous positions) and Hufflepuff as the house for dependable people who don’t have easily noticed good qualities are good ideas as-is, but Rowling unfortunately never follows through.

And so, we come around back to me: A Hufflepuff. What should I think about this? 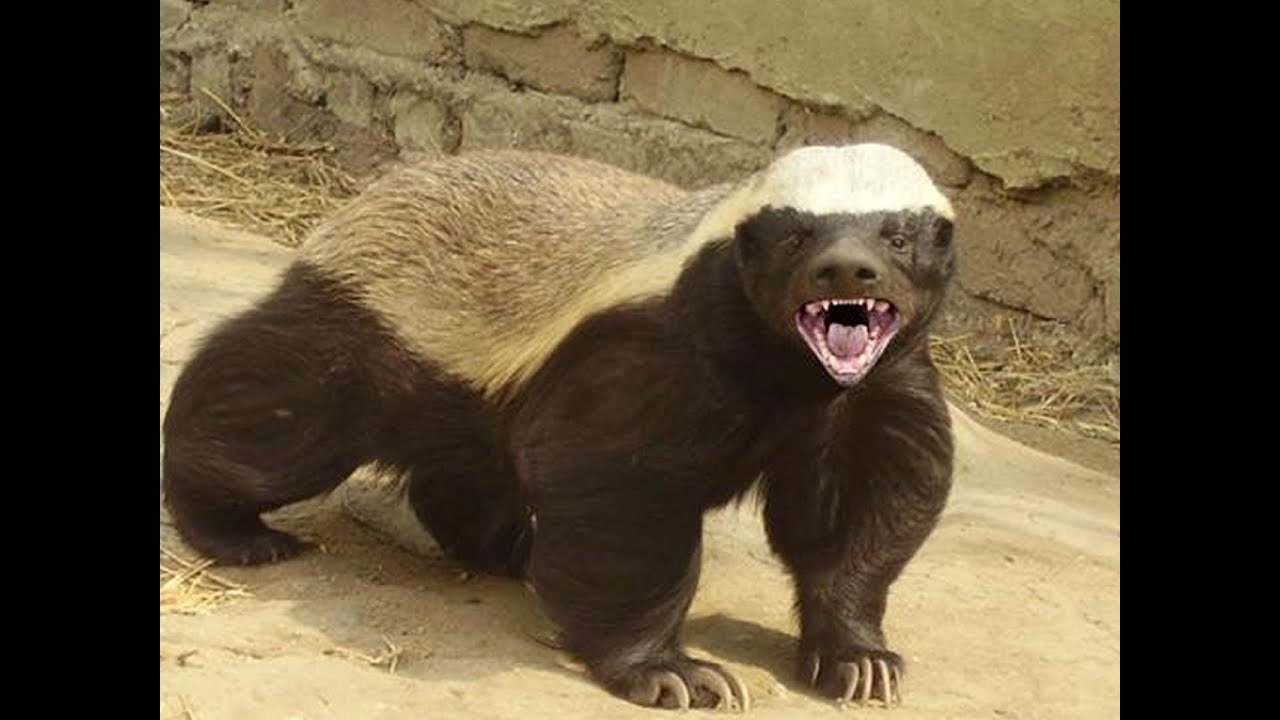 The Honey Badger is not impressed

On reflection, I’m still pretty happy about it. Maybe Rowling eventually came to see it as the reject house, but you know what? Badgers are badass. Don’t underestimate us. And those qualities that Hufflepuff originally stood for, kindness, loyalty, patience, truth, and diligence, are still qualities that I admire. Rowling might think we’re losers, but I don’t think we have to be. I think that potential is still there. And that’s the type of Hufflepuff I want to be.

Hear me out here. Is it really a good idea to be telling children exactly what their strongest and most important qualities are at the age of eleven? Is this healthy? Think of all of the trouble this causes at Hogwarts. In book five, the Sorting Hat warns the student body to come together in the face of the impending threat, and even questions the wisdom of sorting itself. Slytherin has the reputation as the house of dark wizards, so why would you wants children to grow up with that type of stigma?

The issues surrounding sorting didn’t even seem to occur to the most intelligent of the founders, Rowena Ravenclaw…but they did occur to one founder: Helga Hufflepuff.

Hufflepuff didn’t see students as a sort of symbol of her favored characteristics. She saw them as people – as individuals. Hufflepuff wasn’t interested in sorting them – in dividing them based on things they couldn’t choose rather than things they could. Because, again, while Rowling pays lip service to choice – after all, one of the most famous lines in the series (and rightly so) is “It is our choices, Harry, that show what we truly are, far more than our abilities” – the entire concept of the Sorting Hat is inherently anti-choice, if not at that moment, then in the long term. What characteristics are supposed to define you are to be discerned at the age of eleven and are to follow you for, at least, the rest of your time at Hogwarts. Your choices after the Hat sorts you don’t matter.

Hufflepuff didn’t put that sort of pressure on her students – and in that very real sense Hufflepuffs have the most potential of any of the Hogwarts Houses. To misquote Dumbledore, in Hufflepuff it is our choices that make us who we really are, far more than our abilities.

You can actually “logic out” Hufflepuff’s traits from there. What sorts of students would the other three houses reject? Why, the ones who aren’t obviously extraordinary, who aren’t necessarily world shakers, but whose best qualities are quiet strengths like hard work and kindness. So of course that’s what Hufflepuff house came to represent. I’m digging the common room too.

And you know what? The world needs more Hufflepuffs. There’s more to us badgers than meets the eye.

(Would you believe that there’s remarkably little Hufflepuff merchandise out there? Shocking, I know. All I wanted to do was get a lousy backpack, and the only one I could find was 60 dollars! Yikes. Maybe I’ll spring for a snow cap one day.)