SUPERVERSIVE: “Somali and the Forest Spirit” is the Hidden Gem of Winter 2020 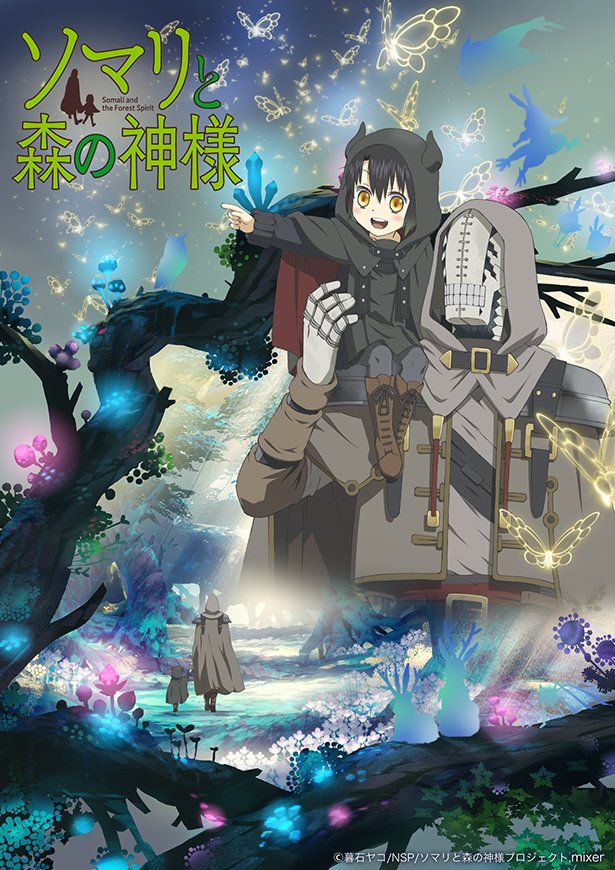 This Winter 2020 anime season was interesting. It had “ID: Invaded”, which was a kind of goofy sci-fi thriller I couldn’t really get into, a cute-girl-doing-MMO-things show called “BOFURI” that I followed for a few episodes and was all right, a very slow supernatural mystery in “In/Spectre” that I kind of liked in spite of myself, and the two best shows of the season, “Keep Your Hands off of Eizouken!” and “Somali and the Forest Spirit”.

Okay, there IS “Dorohedro”, which I am reliably told is the ACTUAL best show of the season. But I haven’t watched it yet. Anyway this show is about a hidden gem, not a consensus favorite.

Of the two shows mentioned above, “Eizouken”, a show about high school girls who decide to make anime, easily got the most hype, and why shouldn’t it? It had brilliant production values, a big name director attached, and characters who were a blast to watch.

But despite its deserved critical reputation, despite all of the things it does well, there is a better non-“Dorohedro” show, and that show is “Somali and the Forest Spirit”.

The premise of “Somali and the Forest Spirit” is simple: In a post-apocalyptic world where humans are nearly extinct and monsters rule, a guardian of the forest known as a Golem meets a little girl. The little girl, known as Somali, promptly dubs the Golem her father, and a relationship is born. Our story starts when Golem and Somali set off on a journey to find fellow humans.

I have to admit, I’m a little tired of “Humans are evil so it’s okay for monsters to kill them” stories (what I call “bargain bin Miyazaki”), but the world of “Somali and the Forest Spirit” is so rich and beautiful it’s hard for me to fault it. More importantly, as the story progresses it becomes more and more obvious that the monsters are lying and they are much more guilty of atrocities themselves then they’d prefer to admit. This is one of the LESS interesting backgrounds

The visuals of “Somali and the Forest Spirit” are nothing short of a wonder. The animation is passably average, but it is undoubtedly one of the best-looking, most visually inventive shows I have ever seen. The use of colors in its backgrounds is brilliant, and there are dozens of unique and creative monster designs. “Somali and the Forest Spirit” is worth watching for that reason alone.

As I said, the second way “Somali and the Forest Spirit” sets itself apart is the execution. “Somali” sets up a question for itself: Golem is going to die soon. What will he do about it?

There’s a lot of potential for heartbreak here, and “Somali and the Forest Spirit” takes advantage. And yet, I don’t think the show is emotionally manipulative. These are real questions Golem has to grapple with, and grapple he does, coming to grips with his growing realization that he’s more than just Somali’s guardian, he’s her father, and that’s a two way relationship.

The show has a pretty good dub, but despite my (apparently unusual) fondness for dubs I’m going to recommend the sub for once. This is because the Japanese voice of Somali is exceptional: She sounds like a real little girl, but manages to hit every emotional beat with aplomb. She’s one of the reasons the show is able to execute its most serious scenes as effectively as it does.

The manga is still ongoing and hasn’t updated itself in a long time, and interestingly enough, the anime actually caught up to it. With the story incomplete, there were two options available: End it where the manga did and leave the story incomplete (who knows how long it’ll take until enough material is created for a season 2, if ever), or come up with an anime original ending, a tremendously difficult thing to execute.

“Somali” ultimately decided to go for broke, and guys, that is the reason I decided to write this article on the day the episode aired and delay my Pokémon retrospective: It is the final episode of the show that convinced me it was going to be one of the best shows of the year no matter what else comes out.

The final episode of “Somali and the Forest Spirit”, particularly the anime-original material, is quite simply some of the finest anime I have seen since I started watching it regularly. The last scene of the show is, in a word, perfect. It is perfectly written, perfectly acted, beautiful to look at, and pays off every single ounce of investment viewers had in the characters up to that point. I won’t promise tears (and really, why would you want to), but I will promise that if you have any fondness at all for Somali and the Golem at that point, the ending will move you.

And that none of this material appeared in the manga is beyond impressive.

But I will promise that if this sounds like the sort of show you would like it will end up being one of the most rewarding viewing experiences of the year – and I’ll make that promise right now, before the spring season even starts.