Actually, this one was my jam

There is a great retrospective about the generation one games on youtube, specifically Red and Blue. It is worth watching. That said, I disagree with sections of it.

The genius of pokemon in terms of marketing is separating which pokemon you can get in each game and not openly stating which pokemon is where (unless you looked it up separately, especially hard when the internet wasn’t nearly as big a part of the culture as it is today). This made finding rare pokemon an exciting event and trading pokemon something to look forward to. It also meant that you were actively asking your friends to get the paired game to yours instead of just recommending it because you liked it – it allowed you to trade.

But I disagree the RPG element is tacked on, for a few reasons. Yes, generation one is a glitchy and utterly broken mess. Yes, while the rock-paper-scissors type system is brilliant in theory it was broken by both baffling design choices and more baffling programming errors. Yes, the story is quite simple. But this doesn’t tell the full story.

The main campaign of pokemon is designed with one primary goal in mind: Making YOU, the player, feel like you are training your team to the point that YOU have become a pokemon master. And to that end, the story and gameplay succeed brilliantly. Everything works towards this goal – the rival constantly pushing you, the evil team that YOU, specifically, are forced to clear away to continue your journey, how the leveling and gym badge system actively documents your progress: It’s all fine-tuned to create a very specific experience.

And it worked, and worked brilliantly. Consider the prevalence of pokemon challenge videos on YouTube. There are dozens of them taking place in generation one. People remember the story of these games, and remember the region of Kanto – they weren’t JUST tacked on elements.

One thing that helped is that the way the world was built was absolutely brilliant. The worldbuilding itself, when looked at under a microscope, doesn’t quite hold together, but the way the game teases out information and lore is masterful, and helps make the game incredibly memorable. This is more than just an RPG shell, it is deliberate, excellent design choices. 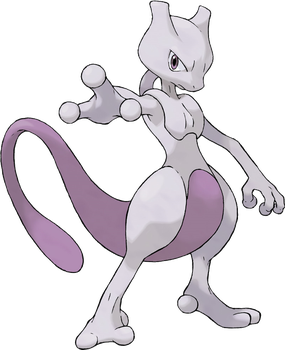 What a great design

Take Mewtwo, the famous legendary pokemon. We first see a cave known as the Unknown Dungeon stuck smack in the center of Cerulean City. What is this cave? Why is it here? Who knows. What we DO know is that the pokemon in it are so powerful it would be dangerous to enter. Talk about temptation!

Fast forward. You get to Cinnabar Island, where you are tasked to explore an old abandoned mansion. So you do, and if you want to you get to read notebooks dotted around the mansion. The notebooks tell a story of a legendary pokemon, created through cloning, that became so powerful it escaped and disappeared – the pokemen Mewtwo. Where is it? Is it still out there?

And remember, you don’t HAVE to read these. But they’re all there, and the choice to read them is yours – remember how this is YOUR story?

Then you win the game. Your team is powerful now, right? Surely you must be strong enough to enter the Unknown Dungeon. So you enter. You explore. You keep exploring. And then…

Mewtwo! And if you took the time to read the notebooks, you know exactly what Mewtwo is. It’s one of the most memorable moments in the entire franchise.

And there are other ways the game is designed that makes the world feel alive. Snorlax block your path. Cities have pokemon graveyards – pokemon can actually die. And my personal favorite, if you get lost in Victory Road, the final route in the game, you might just stumble upon the legendary fire bird, Moltres.

What a great idea that is! A legendary pokemon hidden deep in the bowels of Victory Road, rumored to exist by those who pass through but not confirmed, and you stumble upon it because you got lost. Genius. It is one of the very few changes the otherwise superior generation three remakes made that I think generation one did better.

And that, by the way, is why I’m most convinced they really meant the RPG elements to be more than a mere shell: They remade the games. Twice. And fixed just about every problem. If they really didn’t care, why go through that effort?

For all of their many, many flaws, the gen 1 pokemon games earned both their critical and popular acclaim. And amazingly, the franchise keeps getting better from there.

Next up: Generation 2 – the Johto games. Stay tuned!