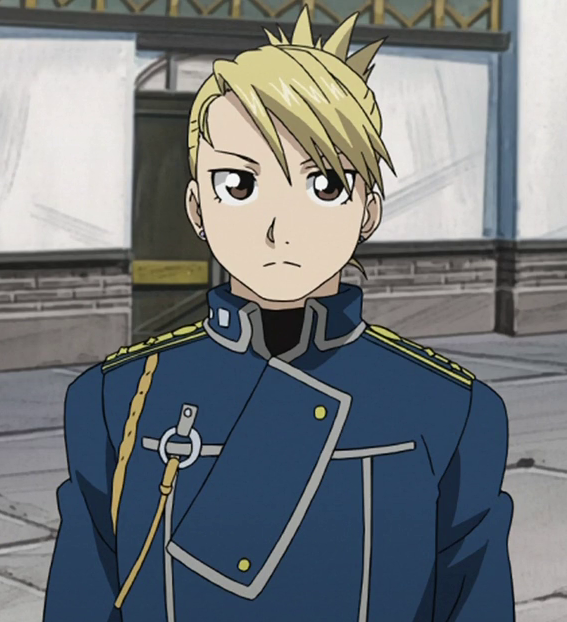 This is a minor update of a post originally made down at Superversive SF.

I have a feeling this is going to be a controversial article.

But I suspect I’ll also get a crowd who thinks I’m just totally wrong and even the characters I talk about here are just awful and women should never ever ever be in these roles ever.

But I stand by it.

You know, I first thought of this rule after watching “Castle in the Sky”, and watching “Fullmetal Alchemist: Brotherhood” helped confirm my conclusion. Since this is what helped me crystallize it more fully in my mind, we’ll call this the Brotherhood Principle.

To write a strong female character successfully – I mean strong in a more masculine sense, like tough in combat or similarly masculine endeavors –  you need one of two things:

1) They need to suffer some sort of loss related to their femininity. Olivier Armstrong in FMAB is tough as nails and can even beat Major Armstrong, her brother, in head to head combat, but she is asked over and over again when she will be able to find a man, the implication being that no man wants to deal with her attitude. Orual in “Till We Have Faces”, by C.S. Lewis, is a terrific swordsman and distinguishes herself in battle but is hideously ugly and unable to marry. Eowyn the Shieldmaiden of “The Lord of the Rings” joins in battle because she is bitter and frustrated after being spurned by Aragorn, and after she survives her fight with the Witch-King she gives up dreams of war and starts a family with Faramir.

2) They need to be paired up with a male character equally strong or stronger. Izumi Curtis is a terrifyingly powerful alchemist and a brilliant martial artist, but she gets this wonderful line of dialogue after joining a fight with Major Armstrong: “You’re a fine man, but I already have a man a hundred times finer than you!”

Despite her martial prowess and essentially magic powers Izumi still makes sure to verbally and publicly praise her husband, whom she is obviously very close to, and she publicly identifies herself as a housewife. The disparity is of course amusing, but it also makes her much more lovable.

(Incidentally Izumi also loses her ability to bear children, which means she’s also a match with point 1. This is a larger point in the 2003 “Fullmetal Alchemist” series, but it is still present in “Brotherhood”.)

Or consider Lieutenant Riza Hawkeye, one of my favorite characters, a badass normal in a world of magic. Hawkeye is, of course, an excellent shot and a formidable and competent foe in combat, but she is the subordinate (and clearly wishes she could be the love interest, come on) of Colonel Mustang, arguably the most powerful of all the alchemists. It is her loyalty and love of Mustang that makes Hawkeye such an endearing character outside of her hard shell.

Miyazaki was, for the most part, extremely adept at this; I quibble with Nausicaa being able to go toe to toe in swordsmanship with trained male soldiers, but even Nausicaa is known more for her more feminine than masculine characteristics, and notably Nausicaa has no love interest. “Princess Mononoke” has a different dynamic going on entirely, and I would argue the balance of power between the males and females is one of the reasons we know that Lady Eboshi’s Iron Town is “off”.

We see examples of this in western media as well. Consider the reception of Princess Leia as opposed to Rey. Leia is also abrasive, rather nasty, and skilled with a weapon, but Leia is also one of the most beloved female characters in movie history. Why?

Because of Han Solo. Han doesn’t take Leia’s crap, so whenever Leia gets too nasty to be likable she’s slapped down, until she admits she has the hots for him and gives in to his charms.

Rey doesn’t get a Han Solo. She gets a Finn, a worthless tag-along who gives her puppy dog eyes when her back is turned.

For that matter, Leia is also turned into a far less interesting and likable character in the new Star Wars films. Leia the Princess who falls in love with the smuggler? Awesome. Leia the general in the bland dress who’s apparently a divorced baby-mama? Nobody cares about that character, not really, and this despite feminist efforts to turn her into some sort of icon.

If you want to make a female character competent and likable, she needs to relate to male characters in a way that is humble and respectful, or she needs to sacrifice a feminine aspect of herself. Men and women are different, and no matter how much we may dislike it that’s the reality we need to face, in life and in fiction.