The Overhaul arc of the “My Hero Academia” anime has caused a truly massive split in the MHA fanbase.

The manga readers couldn’t help but be disappointed – because there was SO MUCH potential, and to be harsh, potential that was wasted.

Not that it was bad! Far from it. I’d call it an arc with insanely high heights and, if not terrible per se, incredibly disappointing lows.

Warning: Everything will be spoiled. Don’t read if you haven’t at least read the arc in the manga.

On the plus side:

The scene where Deku and Mirio meet Eri and Overhaul for the first time is an absolute masterclass in how to build suspense and maintain tension, a nailbiting moment with no actual fighting. Brilliant set up to the arc.

In the raid, the scene where Overhaul uses Confession to convince Eri to come back to him is absolutely heartbreaking. OFA 100% lived up to the hype, a divisive but IMO brilliant episode with insanely great animation and bold direction that at least proved the team at Bones wasn’t just resting on its laurels. They took some big risks and I think it paid off. The moment where Eri jumps into Deku’s arms is a highlight of the entire show.

Nighteye’s death was simply perfect. Just perfect. It was even an improvement on the manga, if only for the music and Mirio’s emotional, heartbroken Japanese voice acting. I didn’t even like the character and I teared up.

The highs were very, very high, some of the best material the show has ever done.

In retrospect we must be honest: Mirio vs. Overhaul was simply not good. It wasn’t terrible, maybe not even bad. It was mediocre. This is an inexcusable lapse by Bones.

Mirio vs. Overhaul, while not the big action setpiece of the arc, is arguably the emotional core.

Mirio claims he will always be Lemillion, but we know the real score from All Might: You can’t be a pro hero with no quirk. Yet to protect Eri, he would give up his world and wouldn’t question the decision for a moment. He’d do it with a smile. Perhaps Lemillion will one day prove All Might wrong, but this is undoubtedly a tremendous sacrifice.

The anime simply doesn’t have this power. Iconic lines, like Mirio’s famous explanation of why heroes wear capes, are said in passing and barely lingered upon, leaving almost no impact. The whole fight – a fight where constant movement is essentially the hallmark of Mirio’s fighting style – features liberal use of slow motion and still frames, matching the manga almost beat for beat but with not nearly enough animation put in between to give the fight the sense of energy it desperately needed.

And it’s topped off with a slide show – literally, a slide show. Just a series of static images. No, those images were not in the manga. Anime isn’t a manga. The whole point of anime is that things move. It’s one of the most disappointing episodes of television I’ve ever seen.

Yet anime onlys loved it. And that’s kind of the arc in a nutshell. The writing is still the writing. It’s still heartbreaking and tragic and inspiring. Without knowing what it could have been it’s easy to see why it would resonate ao strongly with people.

But when you do know…it’s impossible not to be disappointed. 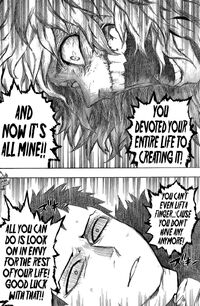 Not nearly as creepy in the anime

This is theme that crops up in the arc over and over again. Unbreakable Spear in the Red Riot/Fat Gum fight was missing the sense of impact from the manga. The League of Villains’ assault on Overhaul was underwhelming compared to the manga. In the episode before OFA 100%, much like in the Mirio vs. Overhaul fight, liberal use of slow motion and still frames covered up a disappointing lack of animation (though the direction was noticeably better).

At its best, the arc succeeded wildly, and even took some daring risks. At its worst, it lacked the punch and passion of its source material.

It isn’t the worst arc of the MHA anime (cough prelim exams cough). But it should have been the best. And while that is disappointing, I think it’s important not to lose perspective and forget the moments where it WAS great. MHA is still in the top tier of shonen battle anime, and the arc was nowhere near bad enough for the show to lose its reputation.

But it’s still hard not to wish for more.

BONUS CONTENT: The voice acting was excellent for both the sub and dub. In particular Mirio was noticeably superior in the sub and Overhaul noticeably superior in the dub. The translations of both had ups and downs, but the dub’s decision to change “twist that future” into “smash that future” was inspired. Personally I also really preferred Deku’s voice acting in the dub but that’s nothing new for once.

Also, I’m digging the new OP. I liked the song for OP 1 but the visuals for this one are way more interesting and the whole thing reminds me of “Diamond is Unbreakable’s” famous “Crazy Noisy Bizarre Town”.