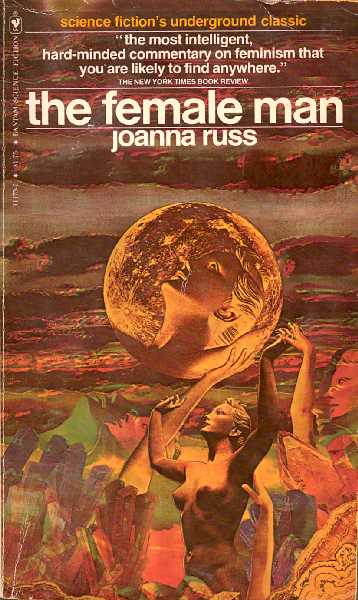 Joanna Russ was perhaps the most influential critic of the seventies fantasy and science fiction scene. Here she is unceremoniously hurting a lot of feelings in her column in the Magazine of Fantasy and Science Ficiton:

I know it’s painful to be told that something in which one has invested intense emotion is not only bad art but bad for you, not only bad for you but ridiculous. I didn’t do it to be mean, honest. Nor did I do it because the promise held out by heroic fantasy, the promise of escape into a wonderful Other world, is one I find temperamentally unappealing. On the contrary, it’s because I understand the intensity of the demand so well (having spent my twenties reading Eddison and Tolkien; I even adapted The Hobbit for the stage) that I also understand the absolute impossibility of ever fulfilling that demand. The current popularity of heroic fantasy scares me; I believe it to be a symptom of political and cultural reaction due to economic depression. […] That our literary heritage began with feudal epics and marchen is no reason to keep on writing them forever. […] Reality is everything. Reality is what there is. Only the hopelessly insensitive find reality so pleasant as to never want to get away from it, but painkillers can be bad for the health, and even if they were not, I am damned if anyone will make me say that the newest fad in analgesics is equivalent to the illumination which is the other thing (besides pleasure) art ought to provide.

You have to wonder why a magazine that had published some of Jack Vance’s best work would make the sort of person that would write this one of their featured critics. It’s baffling.

The lack of imagination it would take to write this astounds me, though. Yes, the sort of heroic fantasy that, say, Poul Anderson liked really was set to wither away from the popular consciousness. Russ may have been glad for that. But it’s worth noting that it was really in the process of morphing into the fantasy gaming industry. From tabletop fantasy role-playing games to today’s massively multiplayer online rpgs, people spend far more of their time and money on the direct descendents of heroic fantasy than anything that Joanna Russ would think was “good” for us.

I have to wonder, though: what precisely is good in a world where “reality” is all that there is?

But she is not the first to make these sorts of claims. There were loads of people like her even in Tolkien’s day, and they were sufficiently loud, snide, and condescending that he naturally took the time to answer Russ’s very objections:

Why should a man be scorned, if, finding himself in prison, he tries to get out and go home? Or if, when he cannot do so, he thinks and talks about other topics than jailers and prison-walls? The world outside has not become less real because the prisoner cannot see it. In using Escape in this way the critics have chosen the wrong word, and, what is more, they are confusing, not always by sincere error, the Escape of the Prisoner with the Flight of the Deserter. just so a Party-spokesman might have labeled departure from the misery of the Fuhrer’s or any other Reich and even criticism of it as treachery …. Not only do they confound the escape of the prisoner with the flight of the deserter; but they would seem to prefer the acquiescence of the “quisling” to the resistance of the patriot.

Decades down the road, it’s Russ that has lapsed into obscurity. And every scrap and fragment from Tolkien’s notebooks has been compiled by his son and are for sale in the last of the brick and mortar book stores. The case can be made that Tolkien was, as T. A. Shippey puts it, the author of the century.

But as respected as Tolkien is another, there is another that could lay claim to that title– one that would be even more objectionable to Russ and her ilk. Ray Bradbury explains:

Burroughs is probably the most influential writer in the entire history of the world…. I’ve talked to more biochemists and more astronomers and technologists in various fields, who, when they were ten years old, fell in love with John Carter and Tarzan and decided to become something romantic. Burroughs put us on the moon. All the technologists read Burroughs. I was once at Caltech with a whole bunch of scientists and they all admitted it. Two leading astronomers—one from Cornell, the other from Caltech—came out and said, Yeah, that’s why we became astronomers. We wanted to see Mars more closely. I find this in most fields. The need for romance is constant, and again, it’s pooh-poohed by intellectuals. As a result they’re going to stunt their kids. You can’t kill a dream. Social obligation has to come from living with some sense of style, high adventure, and romance.

Joanna Russ championed hard science fiction over its pulpier predecessors. She wrote, “daydreams about being tall, handsome (or beautiful), nobel, admired, and involved in thrilling deeds are not the same as as-if speculation which produces medical and technological advances.” And while she quite admired the fruits of the technological advances that she enjoyed, she held in contempt the sort of dreams and virtues and even romance that makes them possible.

The reality is that you can’t have one without the other.