Let me start off with this. I LOVE the Sly Cooper series, which was arguably the single most underappreciated series of games in the PS2 era (which also happened to be the golden age of 3D platforming, what with the Ratchet and Clank and Jak and Daxter games coming out at the same time). The games were platformers starring Sly Cooper, a raccoon, a gentleman thief, and just about the coolest guy around, and his friends Bentley, a turtle and computer geek, and Murray, who started off the first game as their dumb and rather burdensome sidekick but in game 2 onward turned into the team muscle. Sly was the archetypal “good” thief who only stole from other thieves and liked the challenge more than anything else. Along the way Sly is chased by his nemesis and love interest, Inspector Carmelia Fox, a red-headed fox with a fiery temper who always manages to be a half step behind Sly and the gang.

Sly 1 felt like a Playstation 1 game on a PS2 engine, its story more of an excuse to get Sly into cool locations than anything else (though it gets more depth when you reach the final section). It distinguished itself with outstanding platforming mechanics, awesome level designs, terrific boss battles, and cel-shaded graphics that look cool to this day.

Sly 2 was a revelation in how much it improved upon the original. It was a textbook example of how to do a sequel well, in both storytelling and game design. Everything great about the first games was not only kept, but improved. The story became more complex, with actual surprising twists and real pathos. The level designs became more creative, Sly’s “hub worlds” expanded, more gameplay options appeared, the voice acting improved…all of it, fantastic. The only part of the game that suffered in comparison to the originals were the rather underwhelming boss battles, but the rest of the game was so brilliantly done that it hardly mattered.

Sly 3 wasn’t as much of an improvement over Sly 2 as Sly 2 was over the original. The story was excellent, but the gameplay, while varied, felt more like a collection of minigames interspersed with platforming sections rather than the other way around. What really saved the game was that the minigames as a rule were excellent and the final level was fantastic. The ending wrapped up the major storylines and gave all of the main characters proper closure. It was a perfect stopping point.

And then…eight years later…Sly 4 arrived, titled “Thieves in Time”. I was thrilled! While it could have ended at Sly 3 if they wanted to there was no question that room for a sequel was available.

It was good. I liked it. I’ve played it more than once.

First off was the gameplay. 99% of it was exactly the same, which is in no way a criticism. I was looking for exactly that!

But, see…one of the promises was that the hub worlds were bigger. And sure enough, they were. But this lead to a problem: The guards were too spread out. 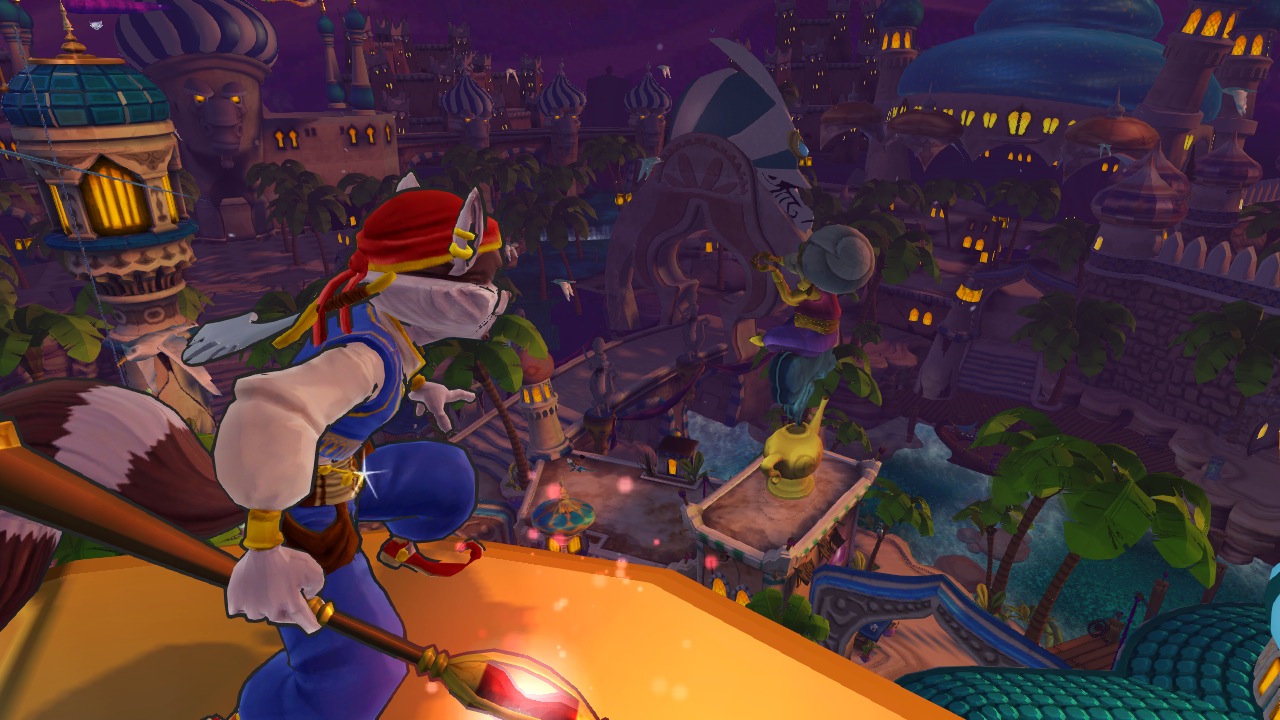 It looks gorgeous, though

You see, in the original series, you needed to be very careful when you walked around, or you’d alert the guards. And if you alerted the guards you’d get at least two, possibly three or more, major guards going after you and even more minor guards. It wasn’t exactly an insurmountable threat, but it made sneaking around useful and practical. In Sly 4, the worlds were so big that escaping was basically child’s play. If you simply ran in the opposite direction the odds were that the other guards were so far away it wouldn’t really be a problem…and you could wander around for minutes without even seeing a guard. It took some of the fun out of wandering around the level. This was a minor flaw, but it was a flaw.

More noticeable was the story. The story wasn’t exactly the best part of Sly Cooper, but it was a draw. The comic booky style and fun use of classic tropes, as well as some plot twists that were actually clever and real moments of pathos, meant that you really were invested in following along. It wasn’t just “there”, it was a part of the game. And in Sly 4 the story was fun, but just…off.

Let’s pivot a little bit here. Carmelita Fox is a cop, and she’s chasing Sly, but she doesn’t hold the power in that relationship. Sly does. He is always the master of the situation, cocky, cool as a cucumber, always read to banter and trade barbs. He respects Carmelita and even has a thing for her, but he’s always the one in control.

This is important. It’s no fun if Carmelita is in control. If Sly is always losing, why would she have a thing for him? He would, literally, be a loser. And if Carmelita keeps kicking Sly’s butt, why would he have a thing for her? She’d be nothing but a thorn in his side instead of a fun challenge with a touch of sex appeal thrown in. That adversarial relationship charged with sexual tension made the whole dynamic exciting; think Han Solo and Princess Leia. Leia might have the power politically and legally, but Han is always the master of the situation every time they banter, and constantly plays the hero. If the dynamic was any other way the romance just doesn’t work.

I think the best example of their relationship comes from the best scene at the end of the original Sly Cooper, and one of the best scenes in the series (incidentally, as you may be able to tell from the art style, the cut scenes in Sly Cooper are awesome in and of themselves). Skip to about 50 seconds in to get to the fun:

I can’t find the exact scene I wanted to show to contrast, but I’ll summarize the general issue.

Sly 4 starts off with Sly and Carmelita together, as game 3 ended.

Then Sly goes back to his thieving ways, and Carmelita gets pissed at him.

Sly spends the rest of the game trying to make it up to her. We get scenes like Sly going up to her trying to explain “How sorry he was” while Carmelita storms off. He stands in the background, giving her puppy dog eyes and looking bashful and ashamed.

That’s not Sly Cooper! Sly would never try to “win over” Carmelita. The problem that Sanzaru had is that Sly and Carmelita’s relationship had simply reached its natural endpoint. If you really want to move forward with the game the proper way to go is to have Bentley and Murray call in Sly for an important mission outside of the law that Sly knows Carmelita won’t approve of. So Sly sneaks off and leaves a note telling Carmelita that he’s going to be gone for awhile. Carmelita gets angry and chases after him, and Sly can keep that cocky, “You-know-you-like-me” attitude without completely losing the moral high ground, even if he is a little guilty about what he has to do. THAT would have worked. A wounded puppy Sly? That doesn’t work. Sly needs to be the master of the situation, no matter what.

I’m being hard on “Thieves in Time” here. I liked it a lot! Seriously! I even had fun with the twisty, comic-booky time travel story! Sly 4 did several things really, really well that did much to make up for its small flaws. The boss battles – with the exception of the awful final level, which was a huge disappointment – were a massive improvement over Sly 2 and 3, creating a style that felt like a hybrid between the boss battles of the original and its sequels, and were some of the game’s best levels.

Sly gets to wear different “costumes” that give him new abilities, and you get to play as Sly’s “ancestors”, who play similar to Sly but with unique abilities of their own. Those were fantastic (and the ancestors were to a man hugely entertaining, especially “Tennessee ‘Kid’ Cooper”, whose “rail slide” levels were probably the very best parts of the game).The level design generally was terrific. The gameplay was varied. The updated cel-shaded animation was absolutely gorgeous. The new cut scene animation was…fine. I’m not sure why they decided to update it, actually, but whatever, it looked good.

It was a very good game with minor gameplay issues and a story that felt off…and an underwhelming ending.

Considering all of that, and considering that the game ended on a MASSIVE cliffhanger, I’m still holding out hope for a Sly 5. Since a TV show is supposedly in the works with luck it may bring back enough interest to make a game 5 viable.

Sly and Carmelita before things go all pear-shaped