This poster is super cool, BTW

It is a brutal game, legendary for its unforgiving nature. It took me – no joke – exactly 200 games just to win on Normal.

But man, when you DO win…the feeling is awesome!

I love FTL so much I actually got my editor at Superversive Press to ask if they were interested in having me write a spin-off novel (the answer was no, sadly).

So why am I telling you this?

Because somebody made that spin-off I wanted to make, except as a show.

That show is FTL: Kestrel Adventures. It’s a Youtube series of 5 to roughly 30 minute shorts (there is only one 30 minute episode and it was a special event episode, the culmination of a long story arc; generally you’re closer to 10 minutes). The whole thing is made entirely by one guy, the voice acting is crap, done by that guy and some of his family members, the animation is mediocre (though impressive because, again, it’s one guy), and the story is dead simple. The characters are mostly archetypes and the setting is basic future space fare.

And it is excellent.

Don’t get me wrong, you’re going to have to bear with it a bit through the first few episodes. It starts off kind of rough. If you’re a fan of the game you’ll appreciate the in-jokes anyway, and it’s still amusing, but it’s nothing to write home about.

But it just gets better, and better, and better. Every single episode is better than the last, culminating in the outstanding half hour special mentioned previously, the climax of an awesome arc where the main characters infiltrate the main base of the Rebels to search for their mother, who may be one of the Rebellion’s leading generals. It ends with a spectacular jailbreak, a huge revelation about the origin of the Rebellion, and a villainous heel-face turn…sort of.

The plot of Kestrel Adventures is simple but it is exactly the sort of “Definitely Trek but done in an interesting and different way” type of story we’ve all been looking for. The Federation – and it is, in fact, called the Federation – has been at war with Rebels for years, and is on the brink of total collapse. Two brothers, Jose and Ricardo, who pilot a junker ship called the Kestrel and work as scrappers, are cleaning out a space station when they find a mysterious message, to be delivered to the leaders of the Federation as soon as possible…all the way on the other side of the galaxy, eight sectors away. The victory or defeat of the Federation lies on the shoulders of the two brothers and their commanding officer, General Pavalo. Together the three of them, along with the various crew members they pick up along the way, must make their way across the vast and dangerous galaxy to deliver their message…or die trying. 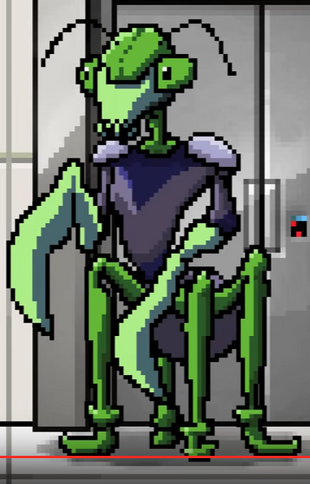 This show is undoubtedly Star Trek. Different species of aliens are encountered along the way and various ethical and philosophical dilemmas are encountered as the story progresses, just as in any Star Trek show or movie worth its salt. The characters start off as little more than ciphers but as the series progresses almost all of them gain new depth and likability. Pavalo particularly ended up becoming one of my favorite characters…and of course everyone who watches it will learn to love Liam, the Mantis man.

But it is everything a new Trek should be. It’s not simply a clone of The Original Series or The Next Generation, like “The Orville”, and it isn’t something called Star Trek but basically in name only, like Discovery or, especially, “Into Darkness”. It is a series with a compelling, serialized story that has never been told before in the Trek universe but nevertheless feels exactly like it belongs in the Star Trek family.

The show is funny, it’s smart, it has interesting characters, and it has some truly outstanding episodes…again, like the excellent Kaban story arc. 25 episodes in it continues to steadily improve, and only gets smarter as it progresses.

Is it perfect? No. As I said, it starts off a little rough, and you gotta get past that. And yes, it has a clear leftist slant. But Star Trek is leftist; it’s in its DNA. Complaining about a leftist slant in Star Trek is like saying you’re not into “Justified” because you dislike all that shooting. I particularly disliked the obvious parallels to Liam the mantis believing he’s a human vs. a transgender person. The parallel itself is fine, you understand, but the conclusions we’re pushed to draw from it are disappointing – essentially we are told that feelings are more important than truth.

And the rebels talking about how things would be better if they “built a wall in space” was stupid. Yes, haha, wall in space, I get it, but first off, the whole problem with the Rebellion – predicated on humans believing they were the superior species and resolving to prove their dominance by conquering the galaxy – was that the humans wanted to conquer everyone else. Wouldn’t separating themselves and living on their own solve the problem? How can you possibly square that attitude with an imperialistic empire?

As I said, you go into Star Trek knowing it has a leftist slant and has from the very beginning, so these are minor complaints. Actually, for the most part it does a pretty good job of presenting the Rebellion as a force that actually makes some decent points; it’s not ALL black and white, and there is stuff to discuss there. For all of its flaws – and as I said, it IS flawed, with a slow start, poor voice acting, a thin plot, a standard “future space” setting, and characters that run the gamut from cardboard cutout to genuinely interesting – it really is an excellent show, a true labor of love, and I’m genuinely invested and excited about the next episode.