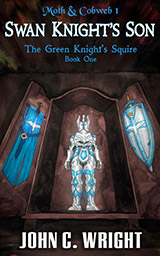 I admit it. I never did “get” the whole thing with talking animal stories when I was a kid. It always seemed self-evident to me that Tolkien’s Middle-Earth was superior in every way to C. S. Lewis’s Narnia. How could anyone not see that?! And judging from the commentary on John C. Wright’s “The Parliament of Beasts and Birds” last year, you’d have to think that the idea that this sort of thing could be a first class element of fantasy and science fiction is something that’s pretty out there.

This state of affairs was not inevitable, of course. And it wasn’t always like this, either. Dial things back to about 1970 when Lord Dunsany was still synonymous with the best that fantasy writing could hope to achieve, and talking animal stories wouldn’t have appeared at all out of place. (Just as one example, check out “The True History of the Hare and the Tortoise” for a particularly good one.)

Reading John C. Wright’s Swan Knight’s Son now, I have to say that in spite of myself I am especially taken with his talking dog:

“I read a book about him. It was called The Once and Future King. He said, “I don’t think things ought to be done because you are able to do them. I think they should be done because you ought to do them. Not might makes right, but might for right. After all, a penny is a penny in any case, however much might is exerted on either side, to prove that it is or is not.’ He said that as a kid, and he grew up and lived it. The forces of evil destroyed him for that.”
“Darn those forces of evil!” I’d bite them. I’d bite them hard!”
“Good dog.”

Who needs a friend like that? Well… everyone, really. And if you aren’t allowed to have pets in your apartment, well… reading about them is the next best thing.

And I don’t know what it is, exactly, but there really is something about it. I’ve said this before, but some of the cheesiest parts The Lord of the Rings… they take on a completely different tone when you read them out loud. The poetry, for instance, comes in for a whole lot of hate from commentators. More than one person has confessed to skipping right over them. Read them to your kids, though, and suddenly you’re getting requests for doing them again! And then there’s those passages between Gimli and Galadriel or Sam and Frodo… you read them… and you find your voice is cracking. Maybe that’s just me, I don’t know. But that stuff I’d never thought of as being particularly important to the story…? Well, it’s actually kind of moving.

I think John C. Wright manages to pull off a similar effect. The result…? Some of the most enjoyable reading I can recollect having in decades:

“When is it?”
“First of August.”
“Well, I got a place I have to go when that date rolls around. You can’t come.”
The dog’s ears drooped. “If it is dangerous, I can bite them. I can. Is that why?”
“No. That is not why.”
“Then why?”
Gil only shook his head and sat down with a sad sigh and put his arm around the mutt. “I made a foolish promise. I cannot break a promise.”
Immediately, the dog brightened up, and his ears stood up like little flying flags. “Oh! It’s one of those honor things! I got it. Dogs know all about honor. Don’t worry! You didn’t hurt my feelings!”
And to prove it, he licked Gil’s face.

This is not “literary.” This is not “epic”. This shouldn’t even work if fiction worked like I think it should work. But this is simultaneously moving and entertaining. Why? Well I’ll tell you: because loyalty is compelling, particularly when it persists in the face of trials. All the more so when the literary norms of the dominant culture seem built on the assumption that likable characters are either unthinkable or else merely in bad taste.

But talking animals are not the only treat in here for fans of Lord Dunsany. Consider this:

He said, “Sometimes I put my ear to the keyhole and listen. Once or twice, I have heard the dim noise of trumpets blowing in the distance. Whose trumpets are those?”
“It is an echo from another world.”

I don’t know why it is, but when authors drop a reference to those famous lines of Tennyson’s, I get really, really excited. Every single time. Why? Because so many fantastic things happen when people go down this path. There’s something downright elemental about it. People are stuck out here living their drab, elfless lives… and then someone shows up to give you them a taste of Elfland! Does it get any better than that…?

I don’t know what gets into me, really. I’m like Sam when he and Frodo run into Gildor. Look, sir. Elves!!!

“Tell me about elfs.”
Ruff looked wary, and he put his head down. “You know! You know! Not really wise to talk about them. Not really safe. Enslave you at night, make you do work, take your stuff, and then put mist in your eyes so that you all think it is because your taxes are high. It is not. Just the thieving elfs at their games. More than half of human toil goes to them, and you blame each other, or the economy, or the weather. But they walk unseen and can dwingle to hide in a cowslip or ride a bumblebee. So they might be listening. Shh! Shh!”

And these elfs? You’re talking some seriously old school stuff here. Just like with talking animals, you might think that this can’t work, too. I mean, Tolkien decried this sort of elf in On Fairy Stories, after all. This sort of thing is so far out of style by now, it’s not even funny. But an odd thing happened with the rise of Dungeons & Dragons and the ubiquity of modern, “epic” fantasy. Elfs ceased being particularly elfish, really. Like Oakes Spalding has pointed out, the advent of the all-new, all-creepy Drow really gets to the heart of where this went wrong:

Pick up Swan Knight’s Son, though, and this just is not a problem. The elfs here are scary and wonderful and awful and nasty and terrific and mysterious all at once! This is what fantasy is supposed to be like. Not unlikeable characters doing nasty things to each other in a medieval dung heap. (Seriously, how did that ever seem like a good idea?!)

But now that you mention it… no, medieval type characters don’t have to be ugly or gruesome or nasty or mean. They can be inspiring. They can be like this:

He called out to the rose-red knight, “Withdraw! There is no shame for an unhorsed rider to stand away from battle!”
The rose-red knight called back, “I defy you! Face my blade, which is named Perledor!”
The first called, “That name is known to me: a valiant blade. And yet with ease might I charge and trample thee. Knight of the Roses.”
“Who treads the rose shall feel its thorns, Knight of the Mistletoe!”
The Knight of the Mistletoe laughed and dismounted and lightly tossed his spear aside, instead drawing his own sword, which was made of black metal, in which silver runes curiously wrought caught the lantern-light and shined. “You are brave, sir! Then let us meet blade to blade, equally, that if you  fall none will demean my name.”
“Well spoken, sir!” said the Knight of the Roses and saluted his foe with his sword.

Yeah, you hear a lot of people complaining about how chivalry is dead over the past few years. What you don’t see is much depiction of chivalrous people being awesome. That’s here in spades. And again, maybe I missed it, but I can’t remember the last time I saw knightly knights bashing the heck out of each other like this. Maybe it’s the complete absence of snark or irony that makes so unbelievably fun, I don’t know. It is insanely fun, though.

Yes, this book has talking animals, creepy elves, and valiant knights. But that’s only the beginning:

“… so we belong truly to no world. But we have kin in all.”
“You mean worlds like in outer space? Mars and Venus and so on?”
“No. My cousin Mathonwy Moth, who is the greatest sorcerer of our generation, says no one lives on those frozen or boiling orbs except the ghosts of long-dead and monstrous civilizations, utterly given over to evil, whose graves and prisons must never be disturbed….”

As if this tale were not jam-packed enough already, John C. Wright effortlessly folds in countless pulp stories as if they were a natural fit with so many traditional takes on elfs and knights. If you think a kitchen-sink approach to fantasy couldn’t compare to the propensity of today’s authors to engage in overdone, intricate worldbuilding exercises, then you have to see this.

I cannot imagine more awesome being crammed into the pages of a single book.