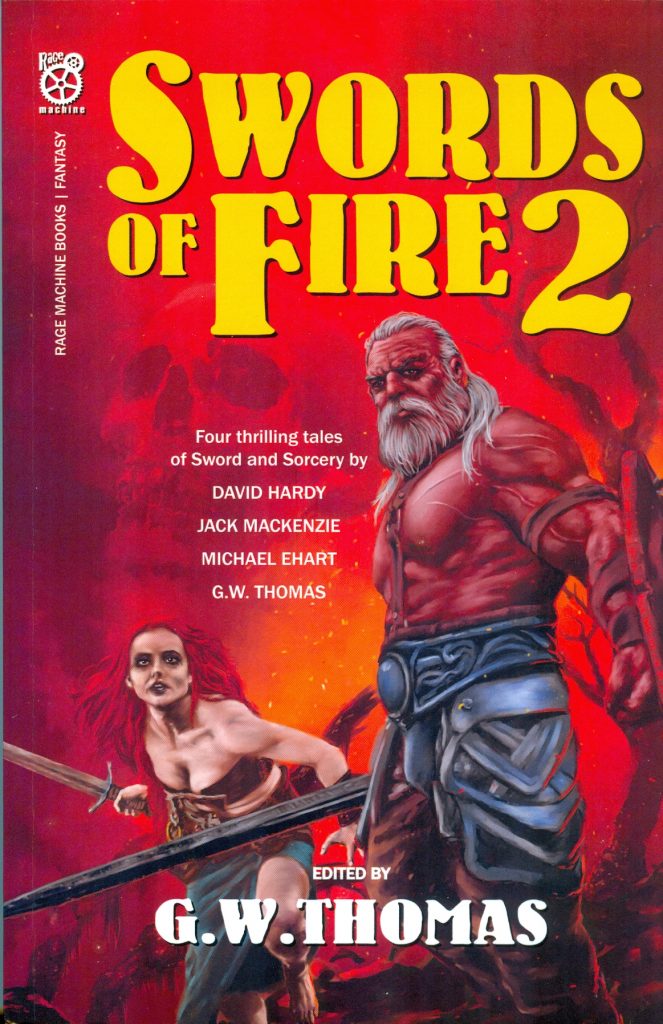 The introduction is short and to the point. Editor G. W. Thomas discusses the format of using four novellas.

“The novella is a perfect length for a heroic fantasy tale. It is long enough to do some world building but keep things moving. Thee is room for a little character development along with the thrills and chills of swordsmen taking on the creatures of darkness.”

I would agree. The ever growing size of paperbacks in the 80s and 90s played its part in the decline of the more succinct sword & sorcery tale.

`           David Hardy’s “The Gladiator King” leads things off. I have known Dave for a while. He is one of the few people that I can discuss Dalmatian Slavic pirates of the 8th Century or the Royal Netherlands Indies Army. This story is set in the late Roman Republic at the outset of the Social War. The gladiator Cingetorix has the god of death, Charun after him, not to mention the Romans. There is some gladiator action mixed with Roman myth. You can take it to the bank that David Hardy thoroughly researches his history and makes no anachronistic mistakes.

Jack MacKenzie’s “Though Dungeons Deep” is a first person account from Poet of his adventure with the warrior Sirtago. A village in a pleasant valley has recruited various heroes to rid them of an oppressive wizard. The prize is a treasure. The setting is a sort of boiler plate fantasy world but well done. There are some interesting twists and turns in the story.

This is the first story I have read by Michael Ehart about Ninshi, a warrior woman in Bronze Age Mesopotamia. The book’s introduction mentions a preceding story with the great title of “Tomb of the Amazon Queen.” “The Daugher of Lilith” has Ninshi and her ward, the young Miri are dogged by a sand demon. You don’t see stories set in Mesopotamia often.

G. W. Thomas’ “The Work We Have in Hand” has the pairing of the rogue Aberdin Vol with the wizard Emmerant to foil a supernatural threat. An inept wizard has led to the possession of most of the mages and wizards by the god Nyoglatha. There is a Lankhmar feel as this takes place in a city and its necropolis.

This was a very fun anthology. I may add well edited also. The prose was professional. There is a number of small press anthologies coming out these days and the writing and by default the editing varies. Rage Machine Books has been around since 2005 and these guys appear to know what they are doing. I thought this anthology to be better than some big publisher books. I think the novella focus really helps. These are not novice writers either.

The cover certainly beats some of the photoshop covers I have seen. Layout makes for pleasant reading. I only found one typo, which is extraordinary.

If you have the itch for some heroic fantasy, check out Swords of Fire 2.