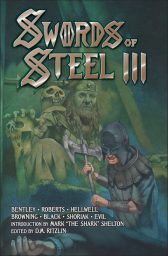 Dave Ritzlin sent me a file of the book to review. Good timing for me. Seems like life is full of putting out fires constantly leaving one tired and run down. Nothing like reading some rip-roaring sword and sorcery stories to lift the spirit.

The premise remains the same as in the first book. All stories are written by musicians who have been or are in heavy metal bands.

This volume is a little longer with 208 pages in comparison to 182 pages for Swords of Steel II. There are seven stories and one poem in volume III while II has nine stories, one poem, and one essay.

Mark Shelton of the bands Manilla Road, Hellwell, and Riddlemaster has a nice introduction that touches on epics, legends, music, and art throughout the ages as foundations for sword and sorcery fiction.

Howie Bentley starts off with “Thannhausefeer’s Guest.” The character Argantyr was present in volume II and returns in this story. Argantyr is the lone survivor of a shipwreck. He is found and taken to a castle where he recuperates from injuries. He also does not remember his identity. The lord of the castle is a giant, 12 feet tall – Thanhausefeer. The giant lord has games to the death between warriors wishing to sail with a great treasure. During the story, Argantyr remembers his identity and the mission he is on. Howie Bentley’s writing has improved since his story in the first Swords of Steel. His series reminds me of 1970s sword and sorcery along the lines of Karl Edward Wagner or in Swords Against Darkness. There is a very memorable plot and secondary characters. I will remember this story in the future, which at this is one of the highest compliments I can give.

Howie is also present with a long poem, “A Paean to My Wolfen Self,” which has a Robert E. Howard theme and cadence to it.

“The Pirate Prince of Tarran” by Ernest Cunningham Hellwell evoked mixed reactions in me. The “protagonists “are fantasticated Barbary pirate types. I have a hard time liking Mohommedan pirates. Moreso as the main character, the ship’s captain is something of a bloodthirsty bastard with little redeeming qualities about him. There is a freed Northman, a buried treasure on an isolated isle, and an epic battle with a sea hydra. The action scenes are well done and the story does hold your attention.

Time travel after WWIII and alien invasion is the basis of Mike Browning’s “The Key.” Religious strife has led to desolation and an opening for alien invasion. The narrator uses alien technology from a crashed sip to build a time travel machine. He goes back in time and kills Jesus, Mary, and Joseph at the nativity.

A dwarf vs. a spider god in a cavern makes for a tense story, “The Chamber of Juleptsu.” There is an enchanted axe and a duel to the death. A good little monster story.

“Eldon” by Chris Shoriak is a different sort of fantasy story than the others in this book. Raised as a servant but well treated in a village, he is sent forth as he is a different blood. He finds the answers to his origin in a city. A sorcerer takes him in, teaches him, and shows they are the last survivors of a massacre. Eldon becomes the vessel to enact vengeance.

Jeffrey Black’s “Stormchaser” is a tale of how a captain to come into possession of his ship when the previous captain sails on a journey to a ghost isle.

Byron Roberts has the third installment and conclusion to the quest of Captain Caleb Blackthorn to lift a curse on him. Blackthorn has a battle with a ship crewed by the living dead controlled by the demon, Maalech Xul. Roberts story has the feel of Michael Moorcock about it with sorcerous swords, other dimensions, and demon warriors. Roberts also loves his thesaurus as he uses words such as coruscant, gangrenous, sepulchral, cankerous, scintillant, viridescent, lucent, etc. Still, the story moves and is entertaining despite some purple flourishes.

Swords of Steel III show improvement in comparison to the first volume. The book contains blood and thunder action, cosmic evil, and memorable characters found within. If you like testosterone laden fantasy, get yourself a copy.

Cost is $10.00. Order from DMRBooks.storenvy.com. You might not have been around to buy Swords Against Darkness off the shelves but you can buy Swords of Steel when it comes out.