Swords of Steel, Volume 2: The Lost City of Tehm 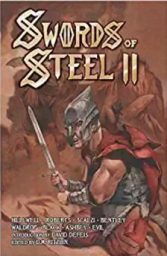 Morgan reviewed the first volume of Swords of Steel back in February of this year.  The second volume was released in 2016, and it provides an excellent chance to analyze each of the twelve stories as part of Castalia House’s on-going effort to review the wealth of short fiction being produced by small and independent publishers.  As with volume one, the marketing hook for the Swords of Steel series is that the contents were written by heavy metal musicians.  So if you’re too old or too square, then this book offers a chance at the passion, the history, and the glimpses into deeper, darker secrets of life and death, but in the far more sedate prose form.

The opening sentence of Swords of Steel, Volume 2, hits the reader with a power chord of a hook:

David DeFeis knows how to write a pulse-pounding introduction. He leaves the reader eager to turn the page, to get to the good stuff~

Well, that’s not a good sign.  It’s only after two pages of geography and history and political background that the reader – if he has persevered – reaches the first inklings of a story.  The tale proper begins with a visit by three western mercenaries to the court of the local potentate, Haru Pesch. Having brought one of his caravans to his palace in Rho Thule, the ruler now entrusts them with a mission to guard the caravan’s return to the great city of Khotar, this time carrying goods of even greater value.  With the preliminary negotiations out of the way, we finally get to the adventure of the three mercenaries, right?  Not so fast.  We also get to spend an evening in a local tavern, where the three meet a famous lost prince of the west turned gladiator turned mercenary, named Tarsus.

The next day, they finally set out on the trail to guard the caravan. The story is eleven pages old at this point, and we haven’t yet had our first intimation of danger.  That’s inexcusable for a tale of blood and thunder.  How much more effective would this story have been if it opened with the raiders leaping up from their disguised pits in the very center of the caravan’s defensive circle, just as the main force of mounted bandits hit the line of defenders? When the western men don’t break because they know how to conduct a fighting retreat, that’s when you reveal their background.  When the blonde barbarian comes riding over the hill to drag the three Comorians to safety, the reader should be left wondering, “Who the heck is this guy?”  That sort of subtle and short lived mystery engages the reader’s brain and keeps them turning pages.

It gets worse, but it also gets a lot better.  Before we delve into more of the story’s weaknesses, let’s look at Hellwell’s strengths. 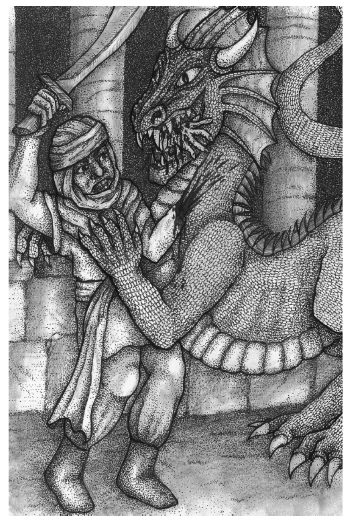 Hellwell writes with an undeniable courage, ignoring the societal norms that have sprung up over the decades to great affect. He unabashedly uses the shifting sands and lawlessness of the pseudo-middle-east to lend The Lost City of Tehm an exotic flavor.  One simply doesn’t do such things these days when all are one and everything is the same and one mustn’t write for a western audience, but only for a vague and nebulous “everybody”.  It’s a small rebellion – this nod to his audience and admission that Swords of Steel isn’t for everyone – but it’s the sort of rebellion that could only survive outside of the established publishing world.  This is clearly a group that writes for themselves, and not the approval of distant, effete urban publishers.

Hellwell has a gift for names. Names are powerful things, and when used correctly, they evoke a deep sense of history and meaning.  They tie civilizations together and allow for maximum meaning with minimal exposition.  The three adventurers who begin our tale are named Braxus, Arrak, and Tarrak.  They work for Haru Pesch, ally of Almec Kahn, against the schemes of Khotar of Khijar.  With only those names, and none of the preceding eleven pages of introduction, we can already infer that the three men are strangers in a strange land.  We do not need to know that they are ex-legionaries of Arcania and Comoria until we need to know that, which should happen just about the time the mercenaries work as a unit against the howling red-sashed bandits.  When the lost prince rides to their rescue in the midst of the disastrous raid on the caravan, we can guess that Tarsus is a westerner just by his name.

Hellwell writes from a position of strength and security. Consider the lost prince’s motivation, which one would be hard pressed to find in the sort of pink-slime fiction being peddled at the local brick and mortar store:

That’s the money shot, right there.  That’s an introduction.  Those two short sentences tell you everything you need to know about Tarsus. We’ve seen the strength of his arms already, now we see the strength of his character. He is a lonely man, but honorable, and loyal even to a stranger who would buy him a drink in a tavern out of comradely affection.

Affection? There’s a word you don’t see bandied about much these days when it comes to male relationships. The forces that control culture have no experience or understanding of what healthy male relationships look like. Normal bonds of brotherhood, the timeless recognition that competent men have for each other, and the unbreakable bonds forged by men who win through adversity together are no longer an acceptable part of mainstream discourse. The language and emotion of the giants of science fiction and fantasy was replaced when the noodle-armed poindexters of the 50s and 60s managed to connive their way like a horse of Wormtongues into positions as leading critics and editors of the genre. The resultant wholesale repudiation of strength and courage and fraternity by the authors of the last half of the twentieth century has drained fiction of a powerful source of conflict and motivation. Into this bland and gray wasteland of meaningless writing strides Hellwell with a plain spoken honesty that resonates with power all out of proportion to word count.

“You called me a brother in arms. I had forgotten that I had any.”

With those two sentences, Hellwell says more about the timeless experiences of men of action than most writers can say in a full length novel. And it’s this fearlessness and ability to convey so much in so few words that makes Hellwell’s shortcomings as an author all the more frustrating. Perhaps Hellwell is new to the game, and just needs more time to find his voice. The prose is uneven with clunky passages rubbing elbows with flashes of brilliance. Perhaps he just needs a better class of editor. This is a self-published work, after all. Perhaps he needs to read a few more “How to Write X” essays. This reads like a love story to the classic works, but written by a writer trying to find his own way through the well-trod wilds of fiction writing.

At this point a few examples are worth reading, not so much to criticize as to illustrate:

Unfortunately for The Lost City of Tehm, it’s not worth the pursuit.  Hellwell shows a considerable amount of potential, and one hopes he will pursue his craft, because with a voice of his own and some tighter editing, this could have been a story to remember. As it stands, it’s not a story best enjoyed as a case study in how not to do it.

Tags:sword and sorcery, swords of steel