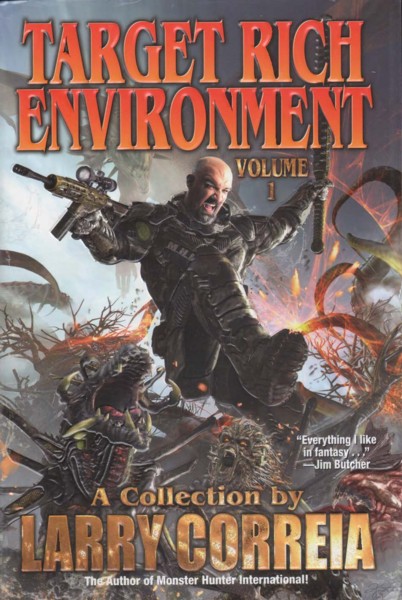 Larry Correia is the Seabury Quinn of the 21st Century, and I mean that in a good way. For those of you who don’t know Seabury Quinn, he was a hugely popular writer for Weird Tales magazine from 1923 through 1951. The majority of his output featured Jules de Grandin, the French doctor, who battled some supernatural or fantastic menace in each story.  Quinn wrote some very good (“The Phantom Farmhouse”) non-de Grandin stories also. Jules de Grandin used all sorts of weapons including guns. Pulp stories never got into detail on specific guns.  I can remember in one of Dashiell Hammett’s Continental Op stories, the Op had a pair of .32 pistols in his coat pockets as backup. Never mentioned if they were revolvers or automatics. Later paperback writers such as Marvin Albert as “Ian MacAlister” and Ben Haas as “John Benteen” would describe model and makes of firearms used. Larry Correia adds on then some when it comes to firearms.

Target Rich Environment Volume 1 is a collection of shorter fiction by Larry Correia from Baen Books. The hardback was released in September 2018, the mass market paperback end of August 2019. Contents include 13 stories ranging from short stories to novellas. The stories range across his series and in some gaming worlds and other writer’s worlds. The tone of the stories rang from humorous to grim. The stories originally appeared in anthologies and online sites.

“Tanya, Princess of the Elves” was not a good start for me. It is a humorous story within the Monster Hunter Universe with an elf princess, from the South, who lives in a trailer court. I am not a fan of this sort of thing. Humorous fantasy of this sort goes back to at least Thorne Smith in the 1920s. The form dominated Unknown magazine to the point that even John Campbell had no interest in reviving the magazine after WW2. 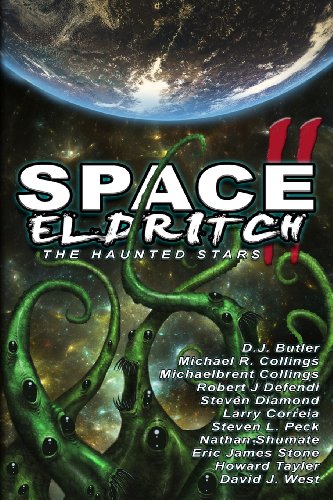 A radical turn in tone takes place with “Dead Waits Dreaming.” This is Lovecraft inspired story set on another planet. It is also unsettling.

“The Bridge” is a fantasy set in an RPG world. A little touch of humor but also plenty of blood and thunder.

“The Grimnoir Chronicles: Murder on the Orient Elite” has skullduggery on an airship. Villainous Japanese agents, an alternate Otto Skorzeny, and Lavrentiy Beria are present with intrigue and action.

“Father’s Day” is a science fiction horror story of alien attack. In this case, the aliens attack us through our dreams. This is another unsettling story.

“Destiny of a Bullet” is a story set in the Iron Kingdoms gaming universe. A cat and mouse tale of a sniper hired to kill an Arcanist. In this universe, firearms work through sorcery.

“Bubba Shackleford’s Professional Monster Killers” is a story that I first read in Straight Outta Tombstone. That was the first Monster Hunter International story that I have read.

Larry Correia’s daughter, Hinckley, is coauthor of this Monster Hunter International story. This story is original to the volume. Another story with the old West setting and a lake monster. 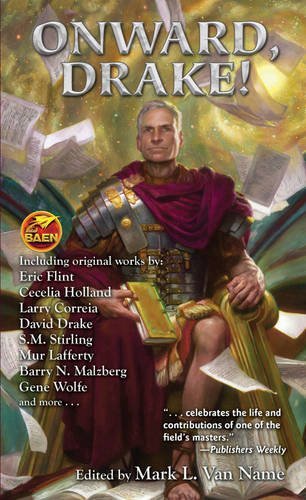 “The Losing Side” is a story set in David Drake’s “Hammer’s Slammers” universe which I first read 34 years ago. Correia’s story is from the viewpoint of a faction fighting against Hammer’s Slammers. A worthy entry to the series. 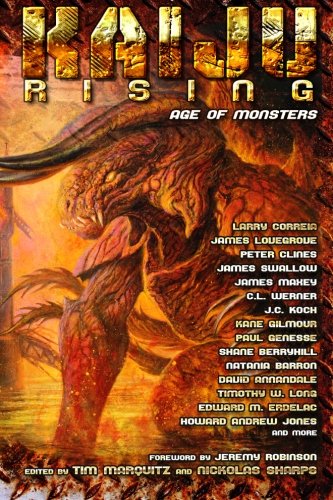 I like Kaiju stories. I read “The Great Sea Beast” in the anthology Kaiju Rising about five or six years ago. In fact, this was the very first thing by Larry Correia that I ever read. The story was one of the best if not the best in the anthology

The Green Berets meet vampires in “Force Multiplier.” A story within the V Wars universe. Lots of action in this one.

The last story is really a novella, “The Adventures of Tom Stranger, Interdimensional Insurance Agent.” I did not care for this one. Another humorous take on alien invasion with a cosmic insurance agent who brokers deal. I am just not into cute.

There you have it. Overall, an enjoyable story collection. A good introduction to Larry Correia. I had not read the Grimnoir stories and now have a background in those. He can write a good horror story in addition to action. Larry Correia is like Joe Lansdale in having an incredible work ethic. He will tackle just about any story type and deliver.