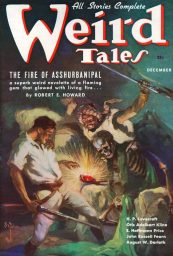 “The Haunter of the Dark” was H. P. Lovecraft’s last story. He wrote it in November 1935 right after finding out about the sale of At the Mountains of Madness and “The Shadow Out of Time” to Astounding Stories.

It is a relatively short piece of fiction at 9,320 words in comparison to most of his stories written in the 1930s. The “Cthulhu Mythos” had spread that other writers were making use of it. Clark Ashton Smith in his Hyperborea cycle, Robert E. Howard with “The Black Stone” and “The Thing on the Roof,” and August Derleth & Mark Schorer in “The Lair of the Star-Spawn.”

Farnsworth Wright had a habit of rejecting Lovecraft while members of the Lovecraft Circle were doing well writing Lovecraft Light. One of the most successful of the Lovecraft imitators was Robert Bloch. Bloch is best remembered today for writing Psycho. He started out writing pastiches of H. P. Lovecraft for the first three or four years as a professionally published author before moving into the direction of psychological horror that he would become famous for.

Bloch’s fourth story in Weird Tales, “The Shambler from the Stars” had a thinly disguised H. P. Lovecraft killed off by an other dimensional horror summoned by a spell from the tome De Vermis Mysteriis.

Lovecraft retaliated in fun with “The Haunter of the Dark.” “Robert Blake” moves to Providence, R.I. for a stay to do some writing. Lovecraft creates some fictional stories written by Blake– “The Burrower Beneath,” “The Stairs in the Crypt,” “Shaggai,” “In the Vale of Pnath,” and “The Feaster from the Stars.” These titles have all since been used for stories, in some cases more than once, by later Lovecraftians.

Blake becomes obsessed with a church steeple in the Federal Hill region of Providence seen from his window. Blake finally searches out the structure and finds a way in through a cellar window. He finds shelves of disintegrating books including Necronomicon, Liber Ivonis, Unaussprechlichen Kulten, and De Vermis Mysteriis. In another room, he finds a metal box with a gem and a skeleton. A paper with disjointed text has a history of the Starry Wisdom congregation in the 1800s including disappearances and the sudden departure of the “church.”

Black hears stirring in the steeple and gets the hell out of there. The gem in the box, the Shining Trapezohedron has a history going to the Old Ones of Antarctica, later salvaged by the serpent men of Valusia. It eventually ends up in the temple of the Pharaoh Nephren-Ka. Prof. Enoch Bowen brings the gem from Egypt to Providence founding the Starry Wisdom sect.

There is activity by night around the steeple of the deserted church. The Italians in Federal Hill are freaking out.

Things come to a head with a black out in a storm. Blake sees a winged thing with a three lobed burning eye. In classic Lovecraft cliché, Blake writes everything down in his diary right up to the end. Blake as mentioned at the beginning of the story was found dead, supposedly killed by lightning.

I remember really liking “The Haunter of the Dark” when reading it 22 years ago. I still like it. It seems when Lovecraft was willing to lighten up, he could produce something that Farnsworth Wright was willing to buy. After re-reading “Haunter,” I re-read Robert Blochs’ “The Shambler from the Stars.” That was the very first Bloch story I ever read. I remember really liking it. That story held up for me.

One wonders if Lovecraft had decided to turn out three or four shorter works per year than the longer epics. Length does appear to be one of the prime reasons for Farnsworth Wright’s rejections. Wright appeared to have no problem buying shorter Mythos stories from others.

Some thoughts after re-reading eight Lovecraft stories. I have 30 years of acquired reading knowledge since initially reading Lovecraft. When I re-read the stories, you notice the problems in execution. The framing devices, the first person narratives, the information dumps, and break down in description at crucial moments. Despite that, there is a hypnotic effect that seems to work and reinforces the imprinting of ideas in your brain. A year from now, I will have no problem remembering the ideas behind Lovecraft’s stories.

For the past year, I have been reading August Derleth’s Lovecraft pastiches and Mythos stories. Derleth was a good, if not great writer. Read Evening in Spring to see how good he could be. Derleth’s Mythos stories are smoothly written. My biggest gripe is his using of Lovecraftisms in the stories. I think they would have stronger without the imitation. Despite Derleth’s superiority as a writer from a technical standpoint, I for the life of me have difficult remembering any details from his Mythos stories. Seems most of them have the Batrachians from Innsmouth as Cthulhu’s henchmen.

This is probably what infuriates critics so much. Lovecraft breaks many rules with his pseudo-archaic writing style and near failure to get the ideas across in any competent manner. Yet if you make it through his longer stories, you are going to remember them.

Lovecraft had a huge impact. The cosmic horror element in sword and sorcery fiction is what sets it apart from being a gothic story with swords on one hand or high fantasy on the other. Clark Ashton Smith, Robert E. Howard, C. L. Moore, Henry Kuttner all had that Lovecraftian element that took things to another level.

Is Lovecraft one of my favorites? Yes and no. I actually prefer reading Joseph Payne Brennan or Carl Jacobi for macabre fiction. I am probably a bigger fan of Donald Wandrei than Lovecraft. Wandrei was also much more truly cosmic in his fiction than Lovecraft.

This has been said before but Lovecraft’s endurance is due to his ideas, not his execution. He threw out all sorts of things that could be used by others in writing, gaming, movies, comic books etc.

This re-read has been interesting. I needed to get some details fresh in my mind for working on a non-fiction piece on Lovecraft’s influence. Next year, I will do this again with a different set of stories. 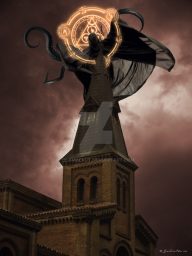