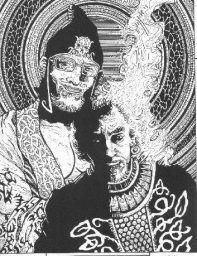 L. Sprague de Camp (1907-2000) was another writer who went from writing fiction to book reviews, non-fiction articles and books, and biographies. If you look at his bibliography, non-fiction essays appear to outnumber the number of fictional stories he wrote.

De Camp was part of the Campbellian revolution in the pages of Astounding Stories/Science Fiction in the late 1930s. He was a major writer for that magazine. L. Sprague de Camp was probably THE quintessential writer for Unknown/Unknown Worlds. His fiction had a light-hearted tone, generally erudite but lacking in pathos and gravitas. He did not seem to take his own stories too seriously. De Camp also had a life-long habit of starting series that were strong at the beginning but lost steam and petered out.

He spent some time in the U.S. Navy during WWII at the Philadelphia Shipyard doing engineer work on mundane things (He had a degree in Aeronautical Engineering). If not a man with screwdriver, he was an engineer with a slide rule. During that time, he stopped writing science fiction and fantasy. His return to fiction in the late 1940s seemed to take some time. It was not until 1949 that he was back to his pre-war production levels with the Viagens series.

De Camp discovered sword and sorcery fiction when Fletcher Pratt passed on a copy of the Gnome Press edition of Conan the Conqueror (“The Hour of the Dragon”). He was intrigued about this previously to him unknown genre.

Robert E. Howard’s Conan stories inspired him to write his own series of prehistoric fantasy within what he called “The Pusad Age.” The Tritonian 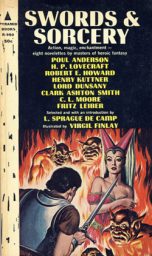 Ring is from this period. He came up with a great fantasy setting. In fact, the setting is better than the stories that he produced set within it.

De Camp was attracted to heroic fantasy/sword and sorcery. He also had to backhand some of the authors. It is a strange relationship. He seemed to have to throw in some mocking and negative criticism to keep his street cred with the science fiction crowd. He also had a bad habit for indulging into posthumous psychoanalysis.

His review of Conan the Conqueror for example:

“Howard was an almost-very-good writer who might have overcome certain limiting quirks had he not killed himself at an early age…His main fault was a tendency carelessly to throw his imaginary world together anyhow, so that the poor carpentry shows.”

In his review of Conan the Barbarian (Gnome Press, 1954) in the August 1955 issue of Science Fiction Quarterly, he refers to Robert E. Howard as “kind of bush-league Eddison.”

“Preece told me how frustrating Howard had found life in Cross Plains, Texas; how he could never get very far away because he supported his parents by his writing and because his mother had kept him too closely tied to her apron-strings. This excessively close relationship proved fatal to Howard…Preece echoed my own thoughts: ‘If he’d only gotten away…If he’d only gone out with girls the way the other boys did.’” De Camp also included the line: “And, without doubt, Howard was a psychological case-study…Howard suffered from delusions of persecution, and his end constituted a classic case of Oedipus complex.”

De Camp included this line in The Science Fiction Handbook in 1953 also. So right off, de Camp is figuratively peeing in the swimming pool.

In 1963 with Swords & Sorcery, the first of the sword and sorcery fiction anthologies include the line “Although a big, powerful man like his heroes, he suffered delusions of persecution and killed himself in an excess of emotion over his aged mother’s death.” He did the same thing with the introduction to the H. P. Lovecraft story (”The Doom That Came to Sarnath.):

“He dwelt with two aged aunts, seldom ventured abroad save at night, and indulged in many obsessions and affectations.”

The other dead writer, Lord Dunsany, on the other hand is described as “the kind of lord than many people would like to be if they had the chance. He was 6′4″ tall, and a sportsman, soldier, traveler, and a man of letters, with a grand gift of poetic speech.” 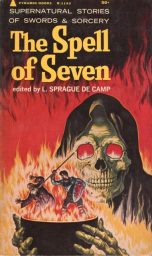 The Spell of Seven in 1965 repeats the formula. It is here the infamous “Maladjusted to the point of psychosis” line is trotted out. That line was reused in 1967 with Conan (Lancer, 1967). I am in the medical field and a comment of this nature is called “editorializing.” If you were to say this about someone living, you would probably get sued. My Legal Encyclopedia and Dictionary describes libel as: “Any malicious defamation expressed in printing or writing and intended to blacken the memory of one who is dead or the reputation of one who is living and expose him to public hatred, contempt, or ridicule is a libel.” A good attorney could probably make a case of libel in this instance.

“His personality was introverted, unconventional, moody, and hot-tempered given to emotional extremes and violent likes and dislikes.” 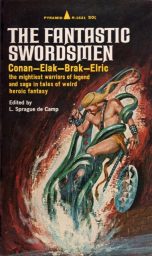 “That sleep-walking alone indicates a profoundly neurotic personality–probably hysteric and hyper-suggestible…It’s obvious that here was a fellow who wasn’t wired up just right in the matter of sex.”

“The Miscast Barbarian” (Literary Swordsmen and Sorcerers, Arkham House, 1976) is a splicing of “Memories of R.E.H” (Amra, Vol II, #38) and “Skald in the Post Oaks” (Fantastic, Oct. 1972) and recycles previous comments. De Camp paraphrases himself: “It seems obvious that the dominating factor in Howard’s life was his devotion to his mother, which answers to the textbook descriptions of the Oedipus complex.” With incredible hubris de Camp then denies doing what he just did:

”We must bear in mind, however, that posthumous psychoanalysis is at best a jejune form of speculation.” Let us not forget the line– “It is plain he was not a well-balanced human being.”

Dark Valley Destiny (Bluejay Books 1983) does not show anything in the way of growth of understanding of Robert E. Howard by L. Sprague de Camp. You don’t get the “maladjusted to the point of psychosis” line but plenty of lines similar in tone. Here is a montage:

“Robert’s many lapses into phantasy in order to liquidate discomfort.” “Together these elements nurtured the violent phantasies of a youthful writer who never learned to cope with reality.” “Much more real to Robert Howard were the demons and goblins from the depths of hell, the strange and evil creatures from other worlds, and the hate-filled, unregenerate humanity–the larcenous oil men, the prostitutes, and the witches who passed as fellow mortals along the streets of Cross Plains.” “Conversely, girls were not likely to be fascinated by Robert. His repute as the town eccentric, his unconventional views, and his spells of misanthropy and moroseness made him unattractive to the local girls.” “Her son’s pathological dependence on her.”

L. Sprague de Camp was an engineer by education, not a psychologist, not a psychiatrist. The big question is why did he engage continuously in dressing up his writing with faux psychology? Some have attributed sinister motives. Examining de Camp’s writings on other authors, there is a pattern. If the writer was alive, you got a pass. If you were dead, the psychoanalysis would creep in. The more de Camp wrote on a subject, the more psychoanalysis. He engaged in it with the Lovecraft biography. Sunand Tryambak Joshi wrote in his H.P. Lovecraft: A Life (Necronomicon Press, 1996): 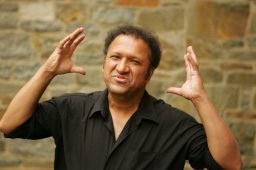 “Whenever de Camp encounters some facet of Lovecraft’s personality that he cannot understand or does not share, he immediately undertakes a kind of half-baked posthumous psychoanalysis. Hence refers to Lovecraft’s sensitivity to place as ‘topomania’–as if no one could be attached to the physical tokens of his birthplace without being considered neurotic…He was out of his depth: and this makes his schoolmasterly chiding of Lovecraft all the more galling…these value judgements were arrived at through inadequate understanding and false perspective.”

You could take out Lovecraft’s name in that passage and insert Howard’s and be correct.

De Camp does it to Henry Kuttner in “Conan’s Compeers”:

“A mature writer, however, assimilates these influences, so that his writings no longer betrays imitation. Kuttner never reached this stage. This fact, together with his lavish use of pen names, suggests a deeply-rooted lack of self-confidence.”

After Lin Carter died, de Camp started the comments about Lin Carter saying he never grew up.  In the early nineties, de Camp was even asking the opinion of a psychologist when describing some de Camp non-admirers in REHUPA (Robert E. Howard United Press Association). He then published the doctor’s opinion in one of his letters in one of the mailings.

I think at the end of the day, de Camp used the psychological mumbo-jumbo to give a patina of authority to his opinions. For whatever reason, he could not just give his opinion and leave it at that, he had to dress it up with pseudo-scientific sounding language as a defense mechanism. I would never think of trying to diagnose a condition of someone dead based on subjective comments given to me by other people. Interestingly, Karl Edward Wagner was a Medical Doctor who did his residency in psychiatry. If anyone could have waded into this area, it was him. His forewords and afterwords for the Berkley Conan books have not a word of psycho-babble.

De Camp’s review of Tolkien’s The Fellowship of the Ring is laughable today.

“Professor Tolkien’s central characters (he teaches English at Oxford) are hobbits–a species of pudgy, hairy-footed dwarf that may be described as a cross between an English white-collar worker and a rabbit…I too found Tolkien’s ‘dear, silly old hobbits’ too dreadfully sweet for my drier taste at times.” 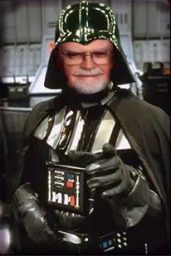 Years later, de Camp could not resist sniping at Tolkien in Literary Swordsmen and Sorcerers for Tolkien’s indulgence of names for the same character in different languages: “Aragorn who is also “Elessar, also Dunadan…All of which seems a bit much.”

L. Sprague de Camp is a mixed bag. He loved heroic fantasy. He did edit the very first paperback anthology of the genre: Swords & Sorcery (Pyramid Books, 1963) and later books including The Spell of Seven, The Fantastic Swordsmen, and Warlocks and Warriors. These are important anthologies despite some of the odious author introductions. Combining the four books into two or better three mass market paperbacks might help educate some of our younger readers and introduce legacy sword and sorcery fiction to those who have no knowledge of it. De Camp’s attraction to psycho-analysis is a strange thing in of itself, perhaps worthy of psycho-analysis itself!