An interesting anthology of sword and sorcery fiction is The Barbarian Swordsmen. This was a U.K. paperback from 1981 published by Star Books edited by Peter Haining under the pseudonym “Sean Richards.” Why the pseudonym?

L. Sprague de Camp was the first to put together an anthology of sword and sorcery fiction with Swords and Sorcery in 1963. He followed up with three more books. Lin Carter edited some retrospective works for the Ballantine Adult Fantasy series (The Young Magicians and New Worlds for Old). Hans Stefan Santesson had two paperbacks that were a mix of reprints and new material in The Mighty Barbarians and The Mighty Swordsmen. The de Camp, Carter, and Santesson anthologies were all from the era of the Lancer Books Conan boom.

Reprint anthologies were part of the fantastic publishing landscape of the late 60s but were over in 1971. There were some anthologies of new fiction (Flashing Swords, Swords Against Darkness, Heroic Fantasy) but the reprint paperback was gone.

The making of Conan the Barbarian movie in the early 1980s appears to be the stimulus for The Barbarian Swordsmen. It is a slender paperback, only 172 pages, that has a Gino D’Achille cover. D’Achille was a popular artist for paperback covers in the 1970s, especially for D.A.W. Books.

Here are the contents:

If you look at the cover, the bottom blurb also mentions the movie Quest for Fire. 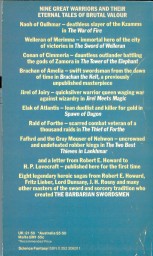 Most of you probably have not heard nor seen the movie. The excerpt is a battle scene from the novel, which is actually quite entertaining. The fun was lost in the movie which attempted to be more National Geographic than fantastic adventure.

Peter Haining’s nine page introduction is a good one with some discussion on what sword and sorcery is, and information on the stories and authors. Haining has this to say:

“Firstly, after all these years of existence, the cinema is at last bringing Heroic Fantasy and Sword and Sorcery to the screen.”

I am not a huge fan of Lord Dunsany though there are some stories and novel (King of Elfland’s Daughter) that I like. “The Sword of Welleran” is one of those attempts to recreate an epic legend that comes close to being sword and sorcery.

Give Mr. Haining credit for doubling down on the Robert E. Howard material. I remember being excited finding this paperback as it contained “Brachan the Kelt.” This is one of the James Allison stories set after the Hyborian Age.

“I was Brachan, tall, yellow-haired, blue-eyed, magnificently thewed, member of one of the great basic races, now extinct. I say extinct, because there lives in the world today no single pure-blooded Aryan. But in Brachan’s day the race was yet unmixed…I was born far to the east of the land in which I grew to manhood, on the open steppes by the shores of that great inland sea which in those dim times stretched from the Arctic Ocean to the Indian Sea, separating the primitive Aryans from the primitive Mongolians.”

C. L. Moore helped make the golden age of Weird Tales in the 1930s. Her Jirel of Joiry was the first woman warrior character that influenced so many later writers. “Jirel Meets Magic” originally appeared in Weird Tales, July 1935 and was the third story in the series.

Henry Kuttner, the husband of C. L. Moore from 1940 on is next with the second Elak of Atlantis story, “Spawn of Dagon.” I first read this story in a Pyramid paperback from the 60s called The Ghoul Keepers a year before I ever read Robert E. Howard. The Elak stories were actually written as a parody of the wandering swordsman story. Kuttner had written two stories about King Alfred of Wessex that Farnsworth Wright, editor of Weird Tales rejected. Kuttner then wrote the first Elak story to see if Wright would buy what Kuttner considered to be crud. Wright took the bait and bought the story. “Spawn of Dagon” has a very strong Lovecraftian element. The Elak stories in general have better sorcery than sword elements.

Clifford Ball was a fan moved by the death of Robert E. Howard to try his hand at sword and sorcery. He was not very good but he is interesting from an historical perspective. He wrote three sword and sorcery stories, three more weird stories, and then disappeared. Ball was stronger on mood and weak on action scenes. Who knows, maybe had he stuck with it, he might have improved. He might have been a casualty of editorial changes at Weird Tales when Dorothy McIlwraith took over as and purged some of Wright’s writers.

Fritz Leiber’s “Two Best Thieves in Lankhmar” is odd in being a story from 1968 and not from the pulp era. The story is less blood and thunder than the early stories like “Two Sought Adventure” and “The Bleak Shore.”

My main quibble with the book is it could have been bigger. The addition of a Clark Ashton Smith and Nictzin Dyalhis story would have gotten it over the 200 page mark. There is even a Robert Bloch sword and sorcery story that keeps eluding anthologers that could have been used.

So, this is a good little book as an introduction to foundational sword and sorcery fiction. I have not seen a copy of this book in a while.