The Best of Planet Stories #1 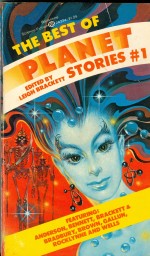 Planet Stories had been a pulp magazine from 1939 to 1955 for 71 issues. It was a quarterly through most of its existence though it a bimonthly schedule in the early 1950s.

Planet Stories was possibly the pulpiest of the science fiction pulp magazines of the 1940s. Astounding Science Fiction may have aimed for mature readers, Thrilling Wonder Stories and Startling Stories in the early 1940s toward younger readers, and Ray Palmer era Amazing Stories to blue collar workers. Planet Stories was probably going for the same audience that bought Thrilling Wonder and Startling. It may have been aiming for readers who normally did not go for science fiction but did read adventure.

The roster of writers for Planet in the early and mid-1940s did sometimes overlap with other Fiction House tittles such as Jungle Stories than with other science fiction pulp magazines. W. Scott Peacock and Bryce Walton being examples.

Early issues were dominated by Ray Cummings, Nelson Bond, and Neil R. Jones. Jones and Cummings were retreads going back decades in the case of Cummings. There were writers who might have a few stories outside of Planet, but associated mainly with the magazine- Albert de Pina, Gardner F. Fox and Emmett McDowell.

Of course, some of Ray Bradbury’s “Martian Chronicle” stories were in Planet as was his famous “A Sound of Thunder.”

The retro Frank Kelly Freas cover stood out in an era when Richard Powers’ abstract covers were dominant. It was a mass-market paperback, 212 pages, and sold for $1.25.

The contents of the book were decidedly against the perceived current of the time when the so-called “New Wave” had been a relatively recent movement. July-Llyn del Rey had come to Ballantine Books in 1973 after Random House bought the company. She brought along husband Lester del-Rey in 1974. Lester had been vocally anti-New Wave and generally anti-academic in general.

David Hartwell’s excellent introduction to The Space Opera Renaissance (Tor Books, 2006) states the del Rey’s changed the meaning of “space opera” from a negative to positive in about a ten year period.

The contents to The Best of Planet Stories #1:

Lorelei of the Red Mist      Leigh Brackett and Ray Bradbury

David Hartwell has noted that Leigh Brackett’s introduction was defensive and provocative at the same time.

“I had the happiest relationship possible for a writer with the editors of Planet Stories. They gave me, in the beginning, a proving-ground where I could gain strength and confidence in the exercise of my fledgling skills, a thing of incalculable value for a young writer.”

“It was fashionable for a while, among certain elements of science-fiction fandom, to hate Planet Stories. They hated the magazine, apparently, 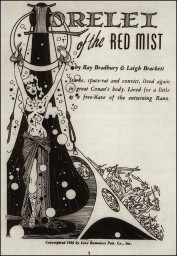 because it was not Astounding Stories, a view which I found ridiculous at the time, and still do…Of course Planet wasn’t Astounding, it never pretended to be Astounding, and that was a mercy for a lot of us who would have starved to death if John W. Campbell, Jr., had been the sole and only market for our wares…And we who wrote for Planet tended to be more interested in wonders than we were in differential calculus or the theory and practice of the hydraulic ram…Astounding went for the cerebrum, Planet for the gut, and it always seemed to me that one target was as valid as the other.”

“Planet, unashamedly, published ‘space opera.’ Space opera, as every reader doubtless knows, is a pejorative term often applied to a story that has an element of adventure…The space opera can be found right where it always was, sturdily driving its dark trade in heroes.
There’s a reason for this. The tale of adventure–of great courage and daring, of battle against the forces of darkness and the unknown–has been with the human race since it first learned to talk.”

Something I have noticed is after the introduction stataes that Planet Stories was not Astounding Science Fiction. Brackett then filled the book with the most Astounding like stories she could find.

I have an almost complete run of Planet Stories and have read a fair number of the stories. This anthology is not really representative of the magazine.

“Lorelei of the Red Mist” is the closest to a typical Planet Stories pocket epic with sword-play, heroes, pseudo-science that is almost sorcery etc. I like Planet Stories because it was the main magazine where sword and sorcery fiction went into disguised hiding during the 1940s. Had Brackett written this a decade before, the story would not have been out of place in Weird Tales. She had this to say about the story:

“One thing for which I will offer a belated apology is the use of the name ‘Conan.’ Conan is, of course, an authentic Celtic name and therefore is public domain. In using it I intended a sort of gesture of respect and affection toward a writer I greatly admired. However, Robert E. Howard had made that name so peculiarly his own, and so strongly identified for all time with his character, that I really had no right to use it, whatever my reason.”

Brackett was probably attempting to head off legal action by the ever-litigious L. Sprague de Camp. “Lorelei of the Red Mist” took up almost a third of the book.

Fredric Brown was a big name in the mystery field, he had stories in the science fiction magazines and some weird stories. This was a piece of humor of a mouse “up-lifted” by a stock mad-scientist. It does not hold up well today.

Raymond Z. Gallun had been a mainstay of the 1930s Astounding Stories. By the 1940s, he was out of Astounding and in Planet with some frequency. This is a very Astounding type story of survival on a harsh Mars. 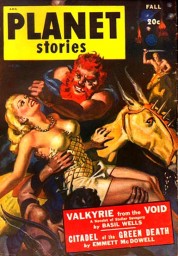 “Quest of Thig” is a tale of alien infiltration of Earth that is subverted by human emotion. The story is a bit on the crude side and one of the weaker stories. Basil Wells was one of those writers found mainly in Planet Stories. He lived in Conneautville, PA, which is about a 25 minute drive from Kinsman, OH. I suspect Brackett included the Wells story as a favor to a friend.

Keith Bennett is a mystery. He only had one story that I can find not only in the science fiction pulp magazines but in any magazines. A tale of the first patrol from the main base on Venus by the newly formed Rocket Service that crashes in the rain forest hundreds of miles away. The story chronicles the 37 men whittled down to seven from the various dangers of the Venusian rain forest. The story reads like it was written by a veteran of jungle warfare. I wonder if Keith Bennett had been a member of Merrill’s Marauders in Burma in WWII. The tone is similar to book I have read on the  5307th Composite Unit (provisional) and their epic trek through the jungle. This is the best story in the book along with “Lorelei of the Red Mist.”

Ross Rocklynne is a favorite 1940s science fiction writer of mine. He turned a number of well-done fantastic adventure stories. “The Dirversifal” is again atypical for the writer with time stream manipulation from the future. This also would not have been out of place in Astounding Science Fiction.

Poul Anderson was a mainstay of Planet Stories with a series of blood and thunder stories of space armadas, barbarian worlds, and galactic empires. He had a two story Martian cycle featuring the “Owlies,” bird like natives of Mars. “Duel of Syrtis” has been reprinted periodically over the years.

There was only one book in this series. I don’t know if poor sales, Brackett’s cancer, or time restraint played a part in the series not continuing. Maybe the series would have included more typical fare from Planet Stories after the initial volume.

Brian Aldiss would include some blood and thunder stories from Planet in his Galactic Empires two volume set. So Brackett’s volume might have started a trend at the time. 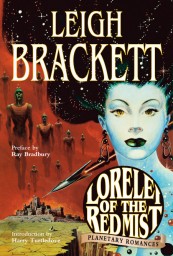 Addendum: Barry Malzberg has told me that sales were poor for The Best of Planet Stories #1. Leigh Brackett did deliver a second volume that was never published.