The Best of Thrilling Adventures 1933-35 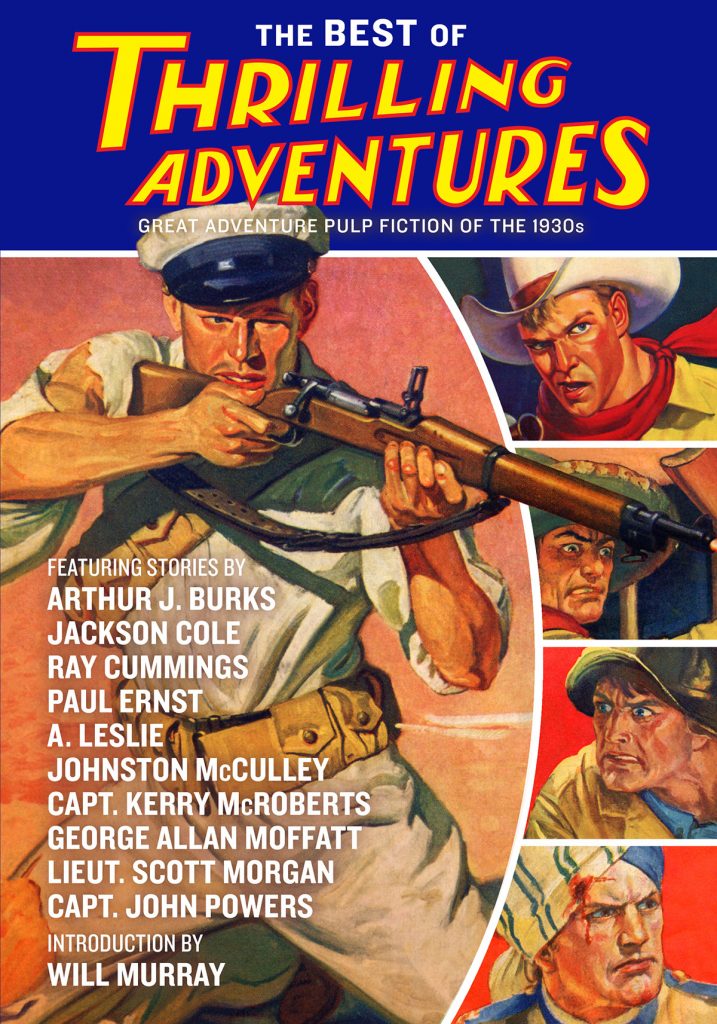 If you are among pulp magazine enthusiasts, Standard Magazine’s titles generally do not rank high on the list of favorites. Late 1940s Startling Stories does have its fans. There are some who collect Texas Rangers, a long running series featuring Jim Hatfield, Texas Ranger. I have never met anyone who goes out of their way to collect Thrilling Detective except for issues with a specific author. 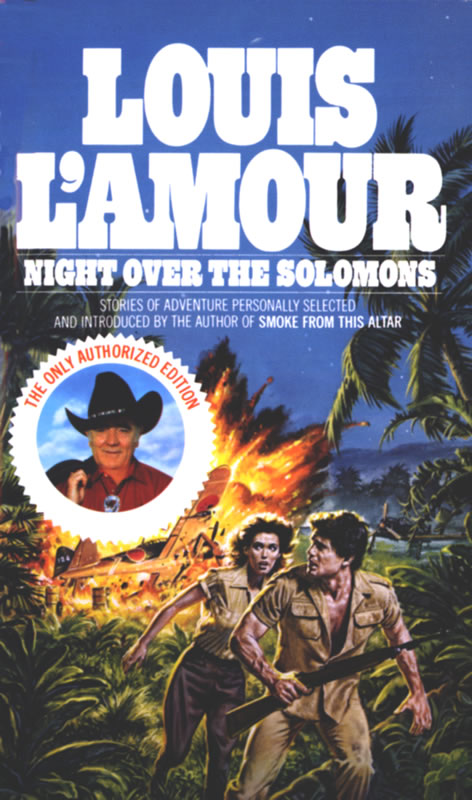 The Best of Thrilling Adventures covers 1933-1935 so this must be the first volume of several projected books. 608 pages containing 21 stories. All the stories are novelettes, some are novellas coming in with over ten chapters. I am fairly knowledgeable on adventure writers but only recognized Arthur J. Burks, A. Leslie, and Johnston McCulley (creator of Zorro). There is a reason for this. 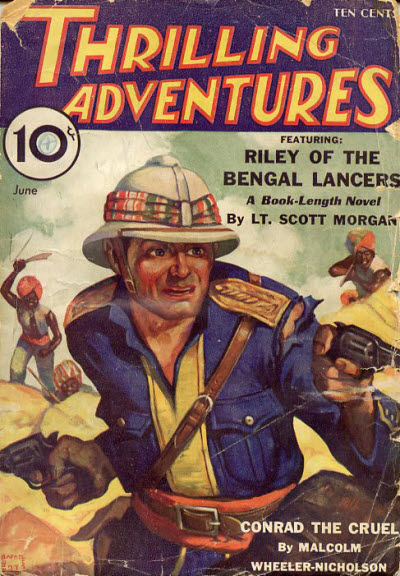 This anthology is pure pulp. One can get a slanted view of the pulp magazines reading reprints by Dashiell Hammett, Raymond Chandler, Ray Bradbury, Leigh Brackett etc. Those are the literary outliers. Read a Weird Tales pulp replica from Girasol in order to really get an idea of what issue after issue of a pulp magazine was like. We grew up reading the best that was worth reprinting.

The stories in this book are rapid paced with lots of action and little to no characterization. The writing style is stripped down for efficiency. Stock situations and coincidence are commonplace. I have been used to accuracy with my years of reading issues of Adventure and Blue Book. In “The Web of the Green Spider” by “Capt. Kerry McRoberts,” a secret service agent finds a guy on the run in Ciudad, Bolivia. A canoe trip and they are in Venezuela at the headwaters of the Orinoco River. “McRoberts” needed to look at a map. “The Sultan of Hell” also by “McRoberts” is set on Borneo. He describes the native Dyaks as being black and having African negro features. A faux pas there.

I don’t know if Will Murray also edited this book. There are several lost race/lost world yarns.  Will is the Doc Savage guy and Doc Savage visited quite a few strange areas of the globe in his adventures.  So lost race/lost world stories are not lacking in this book. “Valley of Giants” by “Jackson Cole” from the July 1933 issue might be a rewritten Lester Dent story announced for All-Fiction in 1931. “Orchid of Doom” by “Lt. Scott Morgan” and “Lost Treasures of Eden” by Capt. John Powers read like both were written by the same writer. Both stories are set in remote areas with remnants of pre-Columbian civilizations in Central America.

For whatever reason, there are seven stories by “Lt. Scott Morgan.” Three of them are in a series featuring Larry Weston. Robbers steal three fabulous pearls from a Buddhist monastery in Tibet. The monks blame Weston who embarks on a quest to recover them. Weston is a name on the paper. He is in perfect physical shape and a righter of wrongs. The stories are nothing special. He returns in one more story.

Ray Cummings had started out in All-Story Weekly in 1919 with “The Girl in the Golden Atom.” He cranked out low level fantastic fiction for decades. He is present with a science fiction story, “World of Doom” from January 1935. It is bad. Paul Ernst’s “Sublevel Seventeen” (February 1935) is not much better. 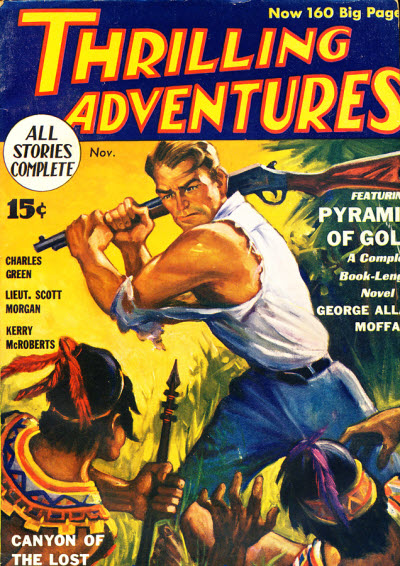 I wish Malcolm Wheeler Nicholson’s “Conrad the Cruel” from the June 1933 issue had been included. Nicholson was a competent writer of historicals including Crusader stories. I like historical adventure whether Viking, medieval, pirate or puffy shirt rapier stuff.

I probably would have liked more Arthur J. Burks. He had been a U.S. Marine Corp officer and an aide to Gen. Smedley Butler. He had traveled a bit which gave some authenticity to his stories. He also knew how to write action scenes. “Hell’s Oasis” has a band of adventurers who have looted the ruins of Ophir but driven in the Sahara Desert by natives. There is an impossible coincidence with an abducted sweetheart of the leader but the action against a band of villainous Arabs is quite good.

I am glad though that I read this anthology. “Valley of Giants” was a gonzo over the top lost world story set in Antarctica with dinosaurs.

The years I will be waiting for is 1939-1943. Manly Wade Wellman had three historical stories. E. Hoffmann Price and Hugh Cave showed up. There is at least one Carl Jacobi story I have not read. Henry Kuttner was a regular in the early 1940s.

If you want to really know what typical pulp magazine fiction writing, pick up The Best of Thrilling Adventures 1933-35. This is square jawed, he-man stuff where the heroes know how to use rifle, pistol, and fist. You can order directly from Altus Press or from Amazon for $29.95. 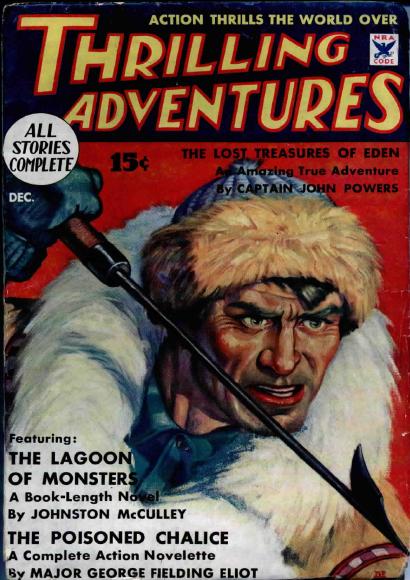