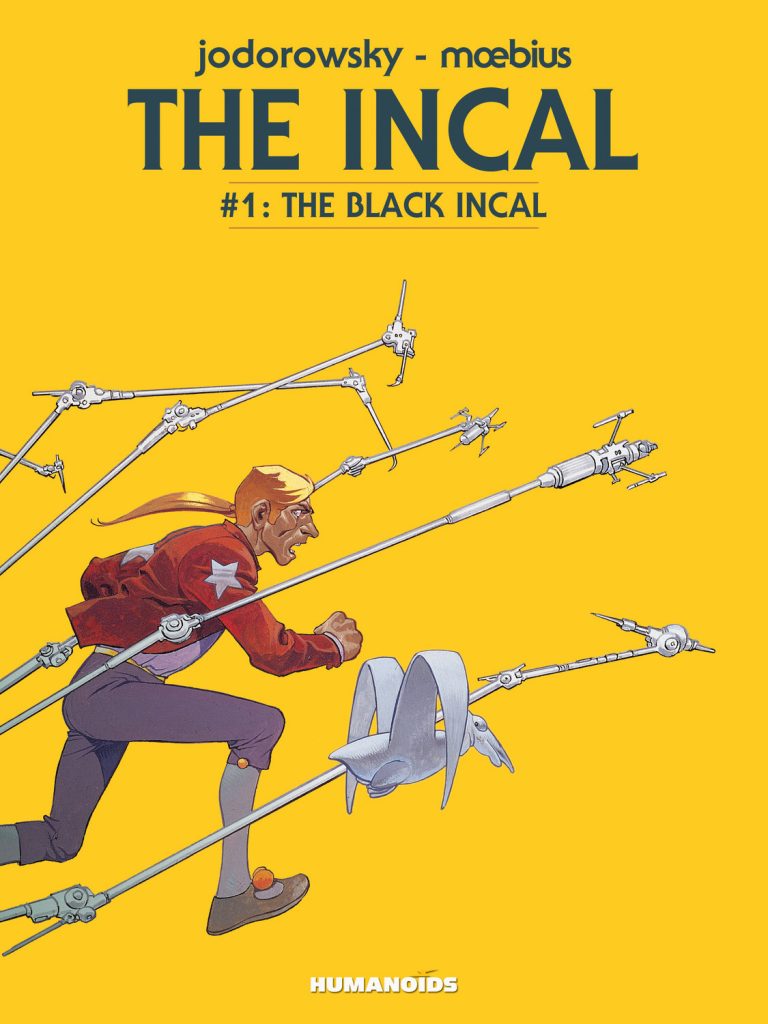 No, John DiFool, you understand nothing! I am not a computer. I am alive, just like you! And destiny has brought us together to restore justice to the universe. – The Incal

The 1980s saw the pages of Metal Hurlant and Heavy Metal filled the strange allegorical journey that is The Incal. Writer Alejandro Jodorowsky and artist Jean “Moebius” Giraud mixed together Dune, dystopia, and Californian pop spirituality to create a cosmic opera. From the first moment when readers plunged into the tale alongside John DiFool’s first fall into Suicide Alley, The Incal has influenced literature, comics, and the silver screen, even influencing the visuals of Star Wars.

The Incal is divided into six issues. The first, The Black Incal, starts with mystery and peril. Who threw John DiFool over the Suicide Alley railing and why? John is rescued mid-fall, not because of any intrinsic worth, but because he has utility to the police. Through a series of flashbacks through the seedy future-noir City Shaft, John reveals he has made petty enemies. What he doesn’t tell the police is that an alien gave him the crystal entity known as the Incal. After John returns to his home to find his pet bird suddenly giving messianic sermons to crowds, the Incal charges John with a mission:

Whooaa! Slow down, Buddy! I’m just a Class “R” Private Detective. I’ve got nothing to do with justice!

Yes, John DiFool, which is why you must now let me transform you.

Certain ideas get hammered home with all the subtlety of a brick. Duality. Light Incal and Black Incal. DiFool and the Metabaron. City-Shaft and Technocity. It is an endless string of foils and resonances in service to pop-philosophy masquerading as spiritualism. John DiFool starts as nothing more than a cowardly appetite amusing himself to death in an uncaring city, unknowingly participating in his own emasculation and consistently flirting with suicide. The Incal’s enlightenment sends him on a New Age version of Pilgrim’s Progress, transforming the future bugman into something more human in the process. Along the way, DiFool faces a constant stream of enemies, including the heroic and noble Metabaron, the universe’s most famous mercenary and a mixture of Superman and Doc Savage. It’s a clumsy allegory worn on the sleeve, with names like DiFool not bothering to hide the parts each character plays. Worse, it is in the service of a discredited and ridiculed spirituality long discarded, akin to a modern scientist extoling the virtues of phlogiston. The result is a story that is more goofy than profound, paired with excellent comic art, complete with the ideal that dualism is an error and embracing both sides instead of the extreme is true virtue.

The Black Incal begins to rise above this with the arrival of the Metabaron, a hero straight from the pulps, who must apprehend DiFool or watch his son be killed before his eyes. Compared to to the swirling seas of Californian crystal madness, the melodramatic trap the Metabaron finds himself in is an anchor. Yet the theme of the obliteration of dualistic distinctions is placed on the board in the Metabaron’s androgyne “son”.

I dreamed I was flying in intergalactic space. A cosmic being formed by two superimposed pyramids, one black, the other white, was calling me. I moved toward it and found myself submerged in the center. We exploded. And that’s how my subconscious mind introduced me to “El Incal.” –Alejandro Jodorowsky

I have hammered hard on the 1980s New Age silliness. To be fair, The Incal is not alone in science fiction in treating spiritual and religious matters with irreverence and goofiness. Valerian and Laureline delved into similar shallowness with its take on the Holy Trinity. But The Black Incal reads as the first book in a transhumanistic gospel intended to be paired with the dystopian world our elites are trying to create. And the stench of “As above, so below” is upon it. 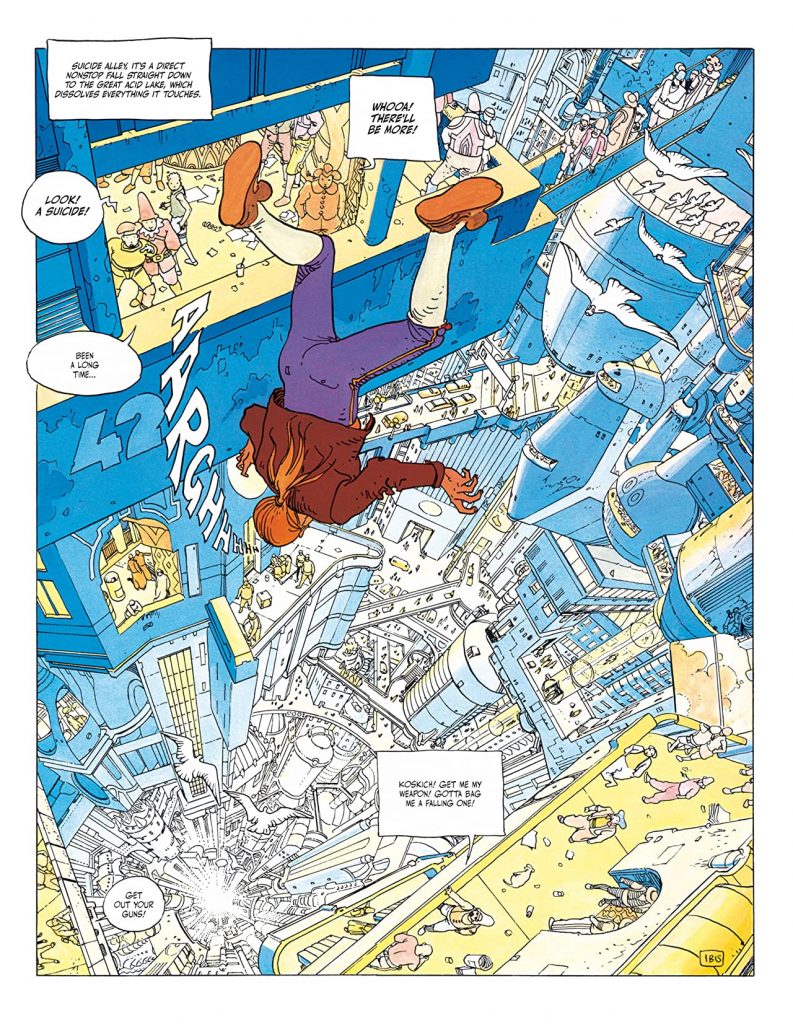 As for the art, Moebius is worthy of his reputation as a master. In The Black Incal, he was in his pulp speed phase, churning out a complete page every day, as opposed to the far more leisurely pace of most bandes dessinee artists. The result is an inconsistency in regards to character models that works to the benefit of each panel. And the Suicide Alley plunge had set the standard for every hive city and megapolis since. For once, a BD looks like a comic book instead of a sequential painting, and while I am appreciative of the high artistry in bandes dessinees, Moebius plays to the strengths of the comic style.

The Incal is one of a short list of comics that serve as the high water mark of the medium. Yet it is dated by its spirituality. If your tolerance for such things is high, the full Incal saga is available on Kindle Unlimited for free. Otherwise, to read a more palatable collaboration in the same setting, check out The Saga of the Meta-Barons instead.