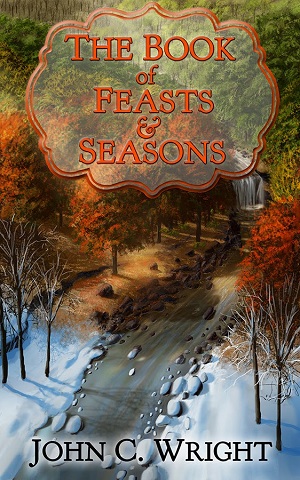 THE BOOK OF FEASTS & SEASONS, by John C. Wright, is a beautifully mind-bending stroll with a grandmaster of science fiction through the annual Catholic calendar. Over the course of the year, from January to December, the author takes his inspiration from ten different holidays and explores their meanings in a series of stories of marvelous imagination. The book begins with New Year’s Day and “The Meaning of Life as Told Me by an Inebriated Science Fiction Writer in New Jersey.” The Feast of the Annunciation of the Blessed Virgin is represented by “A Random World of Delta Capricorni Aa, Called Scheddi”, while “The Parliament of Beasts and Birds” is the story for the Feast of Pentecost. The calendar, and the anthology, culminate on Christmas Eve with “Yes, Virginia, There is a Santa Claus”. John C. Wright is not only a deeply religious man, he is a devout Catholic philosopher who regards reason as an intrinsic aspect of his faith. THE BOOK OF FEASTS & SEASONS is an imaginative embodiment of that faith taking many different shapes and forms throughout the vast expanse of God’s Creation.

THE BOOK OF FEASTS & SEASONS is not the traditional light-hearted seasonal fare, but is as deep and as dark, as full of grief and joy, as the true story of St. Nicholas, Wonderworker, Defender of Orthodoxy, Holy Hierarch, and Bishop of Myra, himself.

The following passage is from “Yes, Virginia, There is a Santa Claus”, as a mother deals with the fresh grief of her daughter’s death.

Virginia glared at the figure in the window on the throne. He really looked nothing like other storefront Santas. He was thin and stern, with a hard, craggy face. His shoulder length hair was white but flecked with black. His red robes were all wrong. They looked more like something a rich Roman Senator would wear than a Santa. An elbow-length cape, red as blood, richly decorated with crosses and trefoils, a second garment, green as emerald and worked with gold thread, reaching below the knee, and beneath that a long cassock falling to his jeweled slippers. Around his neck was a chain of office, with holly leaves dangling from the links, and a cross beneath. Who, these days, puts a cross in a Christmas display?

In his hand he held a shepherd’s staff whose spiral head was adorned all with gold. Obviously the store decorator had confused Santa with the Nativity display, and put one of the shepherd crooks into the wrong hands.

She hated Santa because he was pink. He was the epitome of the pink life, the nice promises of niceness, soft and weak and meaningless promises. He was the man who made grown ups lie to children.

She hated him because he had not come.

Her eyes were filling now with tears, blinding her. She blinked and blinked, rubbing her face in her elbow. The fabric of her sleeve was soaked through with snow.

When she opened her eyes again, Santa was gone.

There was the empty throne in the store display, surrounded by mechanical dolls in pointed hats and pointy shoes. But the tall figure was missing.

Virginia stood on tiptoes, peering through the glass. Had a clerk, working long after midnight, come

by during the moment it took her to wipe her eyes, and removed the six foot tall manikin?

It did not seem possible. The ringing in the air continued. Virginia turned her head and looked down the street. She realized now that it was not the sound of the traffic light walk sign. It was a brighter, sharper sound, like the sound of bells one would hang on a sleigh to tell wanderers lost in the dark woods in the snow that someone was near.

At the same time a deeper, more solemn note sounded, and the echoes walked down the street, huge as ghosts. It was the bell from the steeple of the cathedral across the city park from the hospital. She could not see the steeple from here. Why was it ringing at this hour?

As she looked, not twelve feet from her, as if pulled open by an invisible doorman, the front door of the Department store opened.

Still clutching the stick, Virginia, step by step, approached the door. Silently it stood open. Perhaps it was an automatic door, and the electronic circuit had failed.

She crept still closer, suddenly frightened. What if there had been someone in the store, watching her? A night watchman or something? He had seen her about to break the window, and damage the display, and so he had removed the Santa manikin quickly. And now he was opening the door, in order to ….

But there was no one at the door. It merely stood open, and a few flakes of falling snow drifted in, onto the red carpet of the foyer.

Virginia shook her head. What did it matter? What did anything matter? The door had malfunctioned, and was open, and was letting the snow come it, and so she was supposed to go to close it up again, because there was no one else around to do it.

She walked closer. It was like an explosion, but entirely silent, when all the lights in the store came

on. For a moment, she thought the store was on fire, it was so bright. Down the street, the church bells rang and rang, a solemn noise of joy. The light was red and leaping, mingled with gold light and silver was from Christmas lights and artificial fireplaces and neon angels.

“Nothing to be afraid of,” Virginia said. “Someone in the store just turned on the lights, that’s all.”

A voice from the door answered.

The voice was deeper and more solemn than even the bell, and it echoed and reechoed in her ear.

Emotion raged up in her as if the blood of she-tigers boiled in her veins. Someone playing a trick on her? Now? Tonight, of all nights?

Virginia gripped the stick on one hand and stomped into the department store, her face slick with tears.