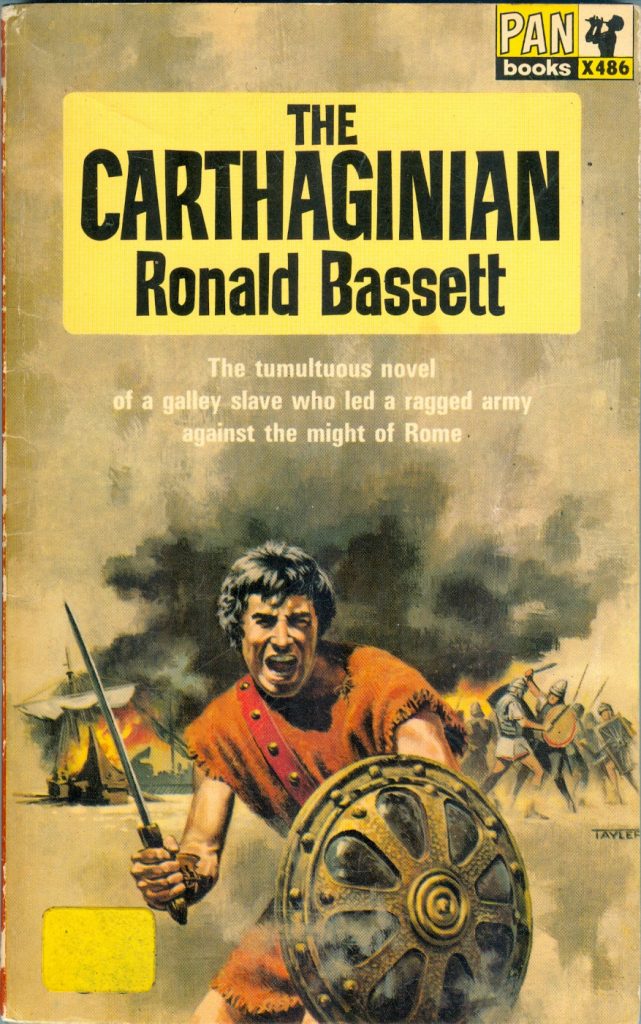 This week’s historical novel is unique. Ronald Bassett’s The Carthaginian (1963) was his first novel. I have the 1966 Pan paperback edition.

The Carthaginian takes place during the Third Punic War. It starts with Carthaginian hostage, Diaz sent as a rower on a slave galley. Action takes right off with that most glorious of action tropes- the slave revolt on a ship. Diaz and his fellow slaves take over a Roman galley in the Mediterranean Sea, beaching it on the coast of North Africa. Diaz knows Rome intends on destroying Carthage and leads the former slaves to his native city.

They sack a Berber town along the way, link up with some Numidian cavalry who are fighting Rome, and end up at Carthage. Bassett does not skimp on the siege and destruction of Carthage. You are exhausted when finishing the novel.

This novel has non-stop action. It is a bloody epic crammed into 206 pages. I was not expecting this at all. Historical novels of the 1950s and 60s generally come in two types. First you have the more literary novel with less action by Thomas B. Costain and Frank Yerby. The other type is by former pulp writers including L. Sprague de Camp, Poul Anderson, and Gardner Fox all wrote in the field. Anderson and Fox’s pulp backgrounds are present in their novels (which I like).

Bassett is a new type of writer. The prose style is not pulp, not even post-pulp but something I will call action modernist. The blood drenched Piccadilly Westerns were a decade away. Was Bassett an influence for a new style? Bassett does not shy from very graphic depictions of violence.

Bassett would write a novel The Pompeians from 1965. He would then write the novel that I remember well as a movie, Witchfinder General (1966). That was possibly Vincent Price’s greatest movie. Review of the book say the book is better than the movie!

If you are into bloody historical action, check out The Carthaginian. Bassett would later write five “Dando” novels about the British Army of the middle 19th Century as by “William Clive.” I may check those out in time as I like Flashman.