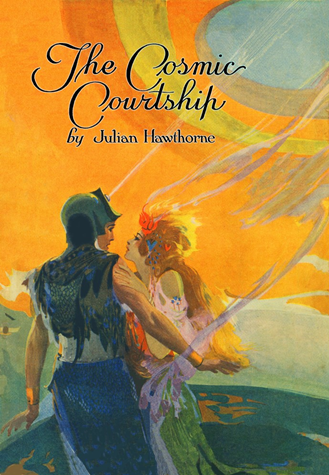 Love at first sight turns into a love that transcends the cosmos in Julian Hawthorne’s lost pulp romance, The Cosmic Courtship. 1917’s Argosy saw the introduction of Jack Paladin, nephew of a famous explorer, and his attempt to win the hand of the brilliant Miriam Mayne. But when Miriam goes missing, Jack sets out to find her. Even if that means beaming himself to the ringed world of Saturn to retrieve her from a sorcerous space tyrant. The result is a strange, redemptively Christian mix of romance and raygun romance that presages C. S. Lewis’s better known Out of the Silent Planet. But where Lewis’s Ransom tries desperately to prevent another fall, Paladin and his Saturnian allies seek to redeem and restore those who are lost.

Editor P. Alexander, who is bringing The Cosmic Courtship back into print, describes Hawthorne’s background:

While most are at least somewhat familiar with Nathaniel Hawthorne as one of the great American authors, less well known is that his son,  Julian Hawthorne, was an incredibly prolific writer in his own right. Julian wrote on a wide variety of subjects, ranging from literary analysis of his father’s works to poetry to period romances and adventures. Late in his career, Julian even dabbled in the emerging genre of Science Fiction [Hugo Gernsback had only recently coined the awkward term “Scientifiction” when this story was first published.]

It is hard not to compare Hawthorne’s interplanetary adventures to those later adventure of the Inklings. The prose is elevated and aspirational, ornate without being purple, and a far cry from the simplifications of the Black Mask style to be born ten years later. Hawthorne sets out to explore love, both romantic and compassionate, and places it in an otherworldly realm that cleaves closer to fairy tales than the unimaginative sciences of Hugo Gernsback. It becomes difficult to not draw parallels between The Cosmic Courtship and Lewis’s Malacandra and Tolkien’s Samwise Gamgee, as examples of an unfallen Christian cosmic kingdom and steadfast, sacrificial friendship have fallen out of favor.

Hawthorne’s tale of a love spanning worlds is among the brightest of the noblebright stories, highly aspirational and pure in motive and archetype, unmarred by baser desire or concern. Mirrors are common throughout the tale, as is fitting, since Hawthorne uses the reflections in his story to present what each of us should be. Paladin is brave, disciplined, decisive, and committed to his love. Miriam is beautiful, clever, and unwavering in her devotion, even when worlds are promised to her by her captor. Paladin’s crippled servant Jim may be unsophisticated, but his loyalty is absolute and pushes him to braveries beyond those of his master’s. And the Saturnians are just yet tempered by mercy, ever seeking to restore those lost to their passions and desires to the One from Whom all love flows.

Hawthorne’s imagination also is unbound by the later conventions of fantasy. While the high prose and the aspirational heroes only add to the fairy tale nature, the strange creatures, clothes woven from actual fire, lost civilizations, and angels visiting unaware add to the palpable sense of wonder shining from the tale. In many ways, The Cosmic Courtship is the fulfillment of Jeffro Johnson’s assertion of the essentially Christian roots of fantasy.

Fortunately, The Cosmic Courtship has been recovered from obscurity by Cirsova Publishing. A wildly successful Kickstarter is in its final days, with a wider public release to follow. This success ensures not only that The Cosmic Courtship will be available to wider audiences once again, but that the rest of Julian Hawthorne’s pulp romances will join it.

Thanks to Cirsova Publishing for the advance copy.