The Curse of the Golden Skull 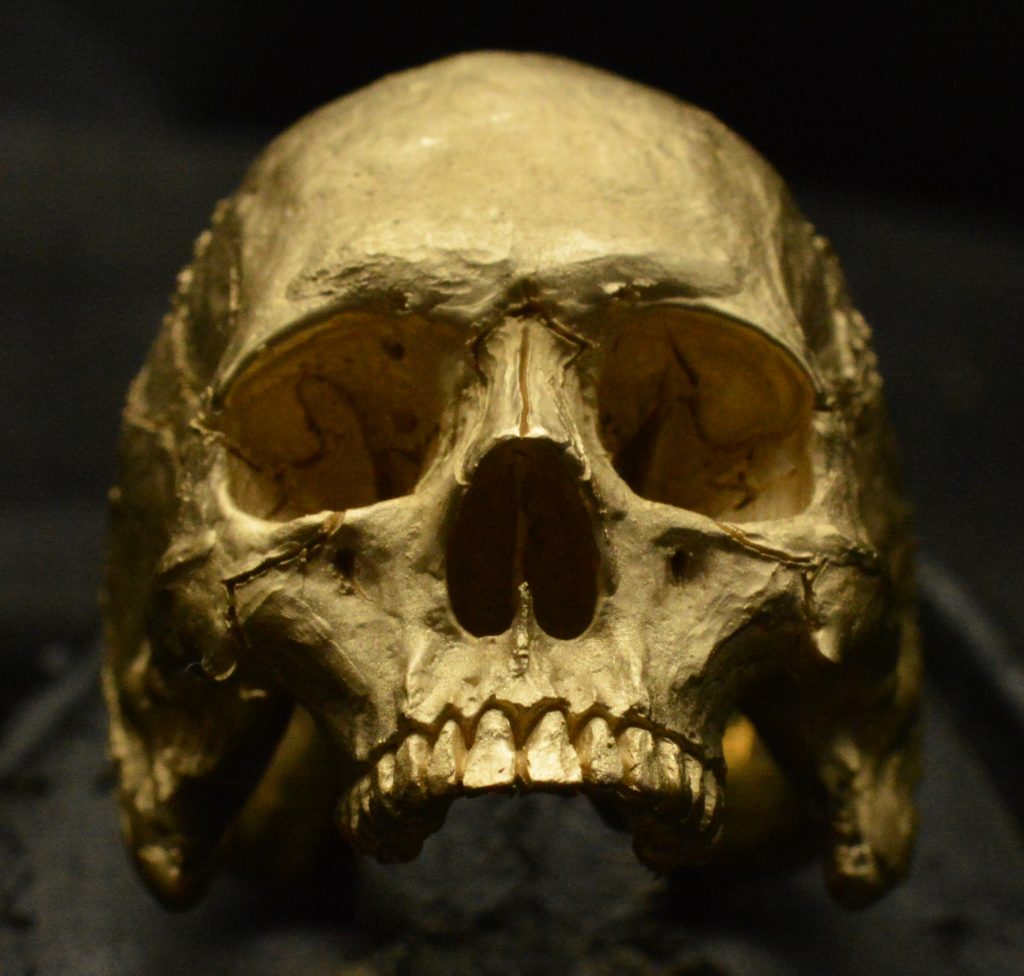 First published in The Howard Collector, Spring 1967, “The Curse of the Golden Skull”, by Robert E. Howard, resembles a prose poem in the same vein as Clark Ashton Smith’s “Chinoiserie”. While there is a narrative thread throughout the short story, it does not, at first glance, map to conventional dramatic structure. The three sections, “The Curse of the Golden Skull”, “The Emerald Interlude”, and “The Orchids of Death” obscure the structure.

The first section deals with the prehistoric perils of an ancient and now doomed magician:

How strange it seemed, that he, Rotath of the Moonstone and the Asphodel, sorcerer and magician, should be gasping out his breath on the marble floor, a victim to that most material of threats — keen pointed sword in a sinewy hand.

Rotath spends his dying moment cursing the gods that allowed him to die. As their dark servants come for him, this sorcerer casts one last desperate and spiteful spell that changes his body, one that he hopes will wreak havoc across the ages.

In the “Emerald Interlude”, the ages pass:

Years stretched into centuries, centuries became ages. The green oceans rose and wrote an epic poem in emerald and the rhythm thereof was terrible. Thrones toppled and silver trumpets fell silent forever. The races of men passed as smoke drifts from the breast of a summer. The roaring jade green seas engulfed the lands and all mountains sank, even the highest mountain of Lemuria.

That’s the entire interlude, a descriptive section filled with as much tumult and cataclysmic action as can be fit into 64 words. And, in its way, it’s emblematic of the entire “The Curse of the Golden Skull”. Howard comes out swinging with his descriptions and fills the story with the struggle of the fight. The Jeffro Johnson test for covers (have people busy with action instead of standing around looking cool) applies here. And this is just the contemplative section denoting that the time is passing.

The final section, “The Orchids of Death”, picks up with an unnamed adventurer discovering the skull and skeleton of gold:

What long dead artisan had shaped the thing with such incredible skill? He bent closer, noting the rounded ball-and-socket of the joints, the slight depressions on flat surfaces where muscles had been attached. And he started as the stupendous truth was borne upon him.

The adventurer, of course, is doomed. But is it from the curse or from natural causes? Like most short stories of the era, it all hinges on a twist at the end, a terrible denouement that alters everything that has come before.

The sections and the uneven lengths obscure the dramatic structure present.  The first line immediately thrusts a problem upon Rotath. 600 words in, almost the exact center of the story, Rotath attempts his spiteful defiance, the turning point for the story. And in the last lines, we learn whether or not his dying action succeeded. This follows the conventional five-act dramatic structure, albeit with an abbreviated introduction and denouement, and without acts. And Howard’s conflict-filled prose is well suited for drama, even if ages fly past in mere lines.

“The Curse of the Golden Skull” was a happy little discovery nestled deep in the lines of a search engine. As such, it is a delightfully harrowing read that rewards the critical eye’s scrutiny. For, like a good house, the construction is as sound as the facade is beautiful.