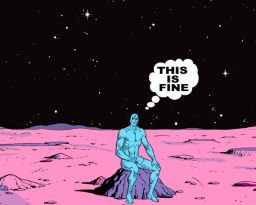 No, Doctor, it really isn’t.

Surveying the blasted wasteland of western culture, frozen and atrophied thanks to the long dark winter of post-modern deconstructionist thought embraced by the intellectual mediocrities that connived their way into positions of influence one might be tempted to give in to despair. The long years since the golden days of our cultural summer faded into the all too brief cool and pleasant newness of autumn long ago, and for years we have suffered the cold and dark cultural nights. But spring is coming. Cracks have formed in the ice pack and green shoots are springing up throughout the land – if one knows where to look.

Let’s look at the realm of comic books. The flailing death throes of Marvel Comics represents only the latest softening of the permafrost. The phenomenal success of Alt★Hero represents the most obvious green shoot, but the most important sign of the coming spring is the reaction of fans to both events. No longer content to turn their backs on the cold and sterile offerings, comic book fans are turning up the heat and demanding better.

With the vast array of forces aligned against the common man, it is more important than ever that fans step back and reassess the history of the medium. Pushing back against the winds of winter and preparing the ground for the coming planting season takes some thought and effort, to be sure. But the rewards are well worth the effort. To that end, let’s turn the weapon of deconstruction around and use it against those who would replace genuine virtue in comics with the empty simulacrum of Diversity Uber Alles.

The common narrative of comic books runs a little something like this: At first comics were bright and cheery and featured stories of black and white morality with clear good guys and bad guys. It was a simpler time, and the stories were far simpler and lacked nuance and context. They were written for children and so the stories only dealt with obvious situations easily understood by the audience. In the late 1960s and throughout the 1970s, as the audience grew older, the stories in comic books matured as well. From the bright morality of Superman, comics segued into the their more sophisticated tales that carried undertones and layers of meaning as typified by the stories of alienation and prejudice presented in the pages of The X-Men. Eventually, comic books outgrew that phase and matured further into the much more wise and philosophical stories of the 1990s that finally presented the bleak and meaninglessness of life in which everyone is a bad guy; even the best of us is deeply flawed and the only thing that truly matters is understanding that nothing matters and living life accordingly. The Patron Saint of this style of comic book – sorry, that’s graphic novel now – is Alan Moore, who wrote classic titles such as V for Vendetta and The Watchmen, both of which reveled in moral ambiguity and nihilism. From the complete abandonment of classic virtue (pagan or Christian), it was a short hop to the power politics of the present day, in which the good guys are characterized only by the day to day feelings of whichever SJW crab is closest to the top of the comic book bucket in the Current Year.

That narrative is garbage. Every word of it.

It feels good. The official and commonly understood story presents we enlightened Current Year denizens as the smart and sophisticated audience who has only ever improved on the simplistic and childish stories of our forebears. We can pat ourselves on the back for being smarter and cleverer and more understanding of the world around us, even as we lament the crumbling civilization that surrounds us. Even as we watch the disappearance of the middle class, the withering of social bonds, and the literal crumbling of our roads and bridges and buildings.

Our pride helps us swallow the sugary lies of that narrative. To admit we have been misled is to risk admitting to faults we prefer to hide even from ourselves. The sort of introspection required to understand how the abandonment of virtue in our media has impoverished us and left us far less clever and sophisticated than we would like to believe ourselves. Worst of all, reconsidering the history of comic books might force us to admit that we were wrong, and few among us enjoy that important part of learning and growing. It’s hard, but it needs to be done. Ironically Intentionally, the very act of casting virtue out of comic books has helped to prevent us from resisting the costly mistake of that pride.

Thanks to Shakespeare we all know pride might cometh before a fall, but have you ever considered that a fall cometh before growth?

Set aside your pride for a moment and consider the old joke about how your father was an idiot when you were a teenager, but ten years later you marveled at how much the old man had learned in one short decade. It’s an amusing tongue in cheek admission that as we grow older we often learn that the wisdom we rejected in our precocious teen years wasn’t so stupid after all. We learn that our understanding of the world was incomplete and that many of the old man’s diktats were built upon a larger and deeper foundation of wisdom than we could possibly have imagined at the time. Not everyone does this – the prideful refuse to admit to their shortcomings and proceed through life with a teenager’s understanding, and they suffer the pains of approaching their problems with that understanding.

In typically succinct style, Vox Day calls the sorts of people who never admit they were wrong about the old man, despite all evidence to the contrary,  “midwits”.

Don’t be a midwit.

Apply the deeper reasoning to the history of comic books.

Were the early comic books bright and did they feature relatively simplistic tales of good and evil? Perhaps. But how is that a criticism? We all face relatively simple temptations between good and evil every day. Why shouldn’t our comic books and movies and literature inspire us to choose the good every time? Tales designed to force us into the moral relativism train us to view every situation as a complex moment in time where what is right and wrong depends on so many factors, and really, who can say what truly is right? That’s a devil’s game designed to produce people who consider their twisting and turning in the winds of their own whim a sign of their grounded responsibility.

Most of the moral quandaries we face on a regular basis are black and white. We know the difference between right and wrong. We recognize it instinctively. It takes active effort to deny the instincts built up in western men over two millennia and pressed into every fiber of our being – active effort and a constant bombardment over generations.

And over the generations that effort has borne bitter fruit. The erasure of black and white morality has left the west bereft of the wisdom that might have saved us from the grim acceptance of truck attacks and mass shootings at outdoor concerts and revelations of the sexual deviancy of entertainment executives that shocked no one. The denial of raw evil in its primal form and the denial of the existence of men who embrace and abuse power for its own sake has left us nearly defenseless against the ravages of terrorist truck drivers and whoever is ultimately responsible for the Mandalay shooting and the countless Hollywood deviants who prey on young men and women. Young men and women who might just have been able to resist the temptation to accept blood money for their silence, and thereby save others from the same fate, if only they had the example of a comic book hero who did not fear the repercussions of doing the right thing and standing up in the face of overwhelming evil.

The nights are long and the winds blow cold through our hearts. Our reserves are running low, and for too long we have been cooped up in our own little cabins, weathering the blizzard in small groups. But take heart. 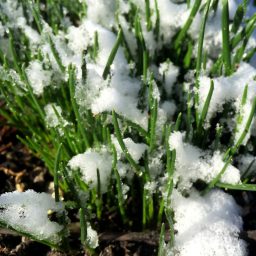 Little green shoots are appearing in the wastelands. They are the harbingers of warmer days and fruitful endeavors, but they also represent a warning that long days of work lie ahead of us. Without considerable sweat and toil, there will be no feasting and no satisfaction of a job well done at the end of the day. The little green shoots must be nurtured and cared for lest a sudden late cold snap snuff them out. Ignore the cold winds or even rage against the storm – defy the forces of winter.

You already know how to care for many of these little green shoots. You are probably already doing so.

In the comic book world, keep supporting projects like Alt★Hero and the ongoing efforts of Diversity and Comics with your financial support. Talk about these projects. Spread the word that others can join in the fun. Talk them up, ask your local shop if they know about them. Plant those seeds. Though many will fall on barren ground, if you don’t drop any, then none can take root.

But also, tend to your own heart. Reject the false gospel of the history of comic books. Ignore those who tell you the golden age superheroes and their troubles are unrelatable compared to the bronze and clay age heroes. You may be told that one cannot imagine himself punching through a wall like a golden age hero, but one could imagine himself standing up for friends ostracized by a wider community as typified by the bronze age heroes. That midwittery lacks the brainpower to understand that the wall is metaphorical. Understand that the wisdom and morality of the comic books written in the generations immediately following Christendom’s great victory against the relentless attacks of her enemies can be conveyed in colorful books with easily understood morals – both in the virtuous sense of the word and in the lessons conveyed sense of the word.

The greatest truths are often the simplest. And the simple truth of comic books is that the golden age was golden because it rejected the sophisticated and complex nonsense of post-modern nihilism. It’s not too late to return to greatness.

All we have to do is choose to nurture those little green shoots.

Leave a Reply to Man of the Atom Cancel reply