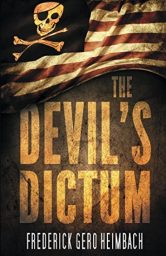 Imagine an alt-history world where the United States of America consisted of a filthy, disease-ridden hell-hole ruled by vicious devil-worshipping psychopaths.

Go ahead and write your own joke.  I’ll wait.

Got that out of your system?  Good.  Because if you made the joke that I think you did, have I got a book for you.  The Devil’s Dictum by Frederick Geo Heimbach takes the concept of a United States founded by pirates, advances the clock to the mid-1940s, and then uses that as the backdrop for a story that seamlessly mixes satire, action, history, insanity, and political intrigue to create a tight little genre all its own.

It’s hard to explain the plot of a novel like this without giving away too much of the setting, and the slow reveal of the setting of The Devil’s Dictum is part of the charm of this novel.  With the eastern seaboard of the United States occupied by pox-ridden scoundrels, the dregs of every nation on earth, the religious refugees from Britain wind up founding a very different sort of Haiti.  No William Penn leaves his eponymous state taking the name “Kiddsylvania”.  No General Washington results in a capital named Burrsburg.  Satanism is the order of the day, and the resulting political turmoil of this United States of America sees the Chief Justice of the Supreme Court the highest law-giver in the land.  The capital building has been sealed tight, with the congresspersons locked inside – only food and ink and parchment are fed into the madhouse/legislature and only bills come out.Into this funhouse mirror world steps the Special Master, right hand man and personal assassin to the High Chief.  Plucked from a coal mine as a young boy and trained alongside dozens of young men who look a lot like himself, the story kicks off when the High Chief tasks the Special Master with rounding up and killing all of his doppelganger classmates.  Wracked with doubt over his mission, the Special Master sets out to solve the mystery of his strange classmates, defies his High Chief, and along the way learns a few valuable lessons about himself.

Along the way, he also encounters J. Edgar Hoover, the high priest of the Church of Satan, who has his own nefarious agenda.  He works with and against the disgraced Judge Learned Hand, and foils the plots of the would be usurper, Justice H. L. Mencken.  He defies an invasion force launched from Haiti and led by Richard Nixon, who pilots a massive robot powered by a building sized power plant dragged along behind by its hundred yard umbilical.  He befriends a young congress-inmate named Tip O’Neill, and probably a dozen other personalities that better historians than me would recognize.

A mix of espionage and mystery, the narrative follows the Special Master on his mission first to round up “The Class of ’29”, takes a detour into the Special Master’s past, and then races through an epic confrontation on the steps of the Supreme Court that weaves together a number of different plot threads in a satisfying conclusion.  A few short sidebar chapters – necessary to flesh out the world and provide context for the action – break up the action, but Heimback handles the transitions deftly and uses the sidebars to round out the narrative in a natural and often way.

And it’s Heimbach’s writing that presents the real draw to this strange and original novel.  With all the craziness going on in the background, he never forgets that the plot and characters have to take center stage.  The matter-of-fact presentation of the decaying streets and structures of an America built by grasping and corrupt men adds a touch of dark humor to what could be a dreary slog through a world populated almost entirely by deranged and selfish and venal politicians.  (Again, I’ll wait.)

To counter balance the bleak nihilism of the setting and most of its occupants, Heimbach also give the reader a fundamentally decent protagonist.  The Special Master might be the world’s greatest spy and assassin, but his heart isn’t really in it, and when faced with difficult moral quandaries, he almost universally does the right thing.  It’s that heart and soul of the book, the way Heimbach’s ultimate faith in humanity even in the darkest of timelines, that elevates The Devil’s Dictum from just another odd alt-history novel to a fun and thrilling read.  Even for those of us who generally prefer a book that might help us forget the constant feeling of ‘whistling passed the gallows’ of our own dark timeline.