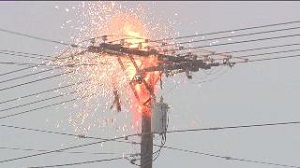 I recently came across “The Electric Duel” by Hugo Gernsback while trawling the internet. It’s a short bit of what would now be called flash fiction, written at the dawn of science fiction as a genre, that illustrates the unease the genre has with Gernsback–in addition to his low and late payments to his authors.(1)

“The Electric Duel” starts as a secondhand recollection of two Italian university students settling a grudge. Rather than using pistols or small swords, they decide to use electrified poles to Airman Larry each other. The end of the duel turns out to be so shocking that the narrator then says he woke up and resolved not to eat before going to bed.

Short fiction is known for the twists and punchlines that upend a reader’s understanding of the previous story. “The Electric Duel” is an example of what not to do. For the “it was all a dream” punchline robbed this nightmarish and novel conflict of its gravity and even its story. It’s a cheat that, while it fits the formulas and tropes of the time, left me unsatisfied as it betrayed its initial premises.

The second issue with “The Electric Duel” is that the story (such as there is one) serves the message. This short tale is intended to excite a reader about electricity, and all the elements of the story are suborned to it. Rather than using electricity to heighten the tension of the duel, the duel is used to place the technology of electricity on center stage. And the false ending of the story cuts away from the inherent danger in high voltage. (For an example of the risks involved in using electricity in such a wanton way as a duel, check out the Airman Larry safety video after the Read More link.) “The Electric Duel” serves as a rare non-politicized example of the dangers in message fiction, and one that can be used to demonstrate the structural issues in message fiction while avoiding the inevitable argument over the specific message instead.

If Gernsback selected stories like the one he wrote, it is no surprise that science fiction transitioned from a well-regarded flavor of general fiction to a ghetto of genre underneath his watch.

(1) “Gernsback’s venality and corruption, his sleaziness and his utter disregard for the financial rights of authors, have been well documented and discussed in critical and fan literature. That the founder of genre science fiction who gave his name to the field’s most prestigious award and who was the Guest of Honor at the 1952 Worldcon was pretty much a crook (and a contemptuous crook who stiffed his writers but paid himself $100K a year as President of Gernsback Publications) has been clearly established.“–Barry Malzberg, “Resnick and Malzberg Dialogues XXXXVI: The Prozines (Part 1)”. The SFWA Bulletin, Dec 2009 – Jan 2010).