The Fortress of Solitude

Doc Savage’s secrets revealed at last! And by a villainous mind of insatiable greed! 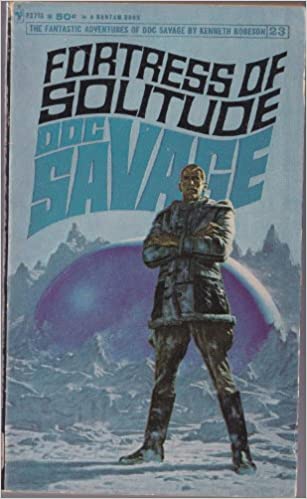 A new Rasputin, called John Sunlight, escapes from a Siberian prison camp in an icebreaker, only to run aground next to the big blue dome of Doc Savage’s Fortress of Solitude. After a brazen theft, Sunlight is selling the weapons Doc Savage has locked away from the rest of the world. Now Doc Savage and his Iron Crew must stop Sunlight and retrieve these weapons before chaos is unleashed on the world. But John Sunlight is that rare individual, a man to match the Man of Bronze himself.

In the “Fortress of Solitude”, Lester Dent gives a peak into one of Doc Savage’s most enduring mysteries, the shrouded Arctic refuge only known as the Fortress of Solitude. In doing so, he gave Doc Savage his only enduring nemesis, and the only villain to ever return to plague the Man of Bronze: John Sunlight. Sunlight would return in “The Devil Genghis”, and the Fortress of Solitude would enter that great mélange of comics and pulp legosity only to reappear under new management of another Superman, a Man of Steel, not Bronze.

Like the adventures of a man named Buckaroo, those borrowings from Doc Savage are in the future. Today’s borrowing, of a weapon that reduces men to windblown ash, is more pressing upon the Man of Bronze. For while the murder of a Soviet diplomat may start as nothing more than a Golden Age mystery for Doc Savage to puzzle out, Sunlight has set his own crew against the Man in Bronze. And while Savage is the leader of a crew of men each worthy of their own pulp series, the fearsome Sunlight drives his own followers to similar acts of bravery. Might the key to breaking this stalemate rest with two strongwomen searching for their kidnapped sister?

“I salute again…the man who has inherited the qualities of the Erinyes, the Eumenides, of Titan, and of Friar Rush, with a touch of Dracula and Frankenstein.

The star of “The Fortress of Solitude” is John Sunlight, a mentalist menace with the strength to put the terror behind his words. He is a dark reflection of Doc Savage, a charismatic Renaissance Man of Science, a sinister Shadow with agents throughout the world. Dent wastes no time establishing Sunlight as an unapologetic menace shrouded in an aura of fear that compels obedience…or else.

“John Sunlight,” the bronze man said, “is probably as complete a fiend as we ever met.”

And unrepentantly so, which is refreshing in this era that so desperately tries to scrub the agency out of evil. But such a man as Sunlight is a just a puzzle to Doc Savage, to be put together and rearranged and reformed in Savage’s Crime College until he is no longer a threat to his fellow man. Sunlight’s breach of Doc Savage’s privacy, by invading the sanctum of the Fortress of Solitude, however, rocks the Man of Bronze on his heels.

For once, this is not just the misdirection common to the hero pulps, although Doc Savage uses the illusionist’s mainstay with all the skill of his fellow hero, The Shadow. But Doc Savage quickly recovers, setting his powers of observation and planning against Sunlight, until the mysterious Rasputin who once force Savage to react to his ever move is now reacting to Doc’s decoys. The effect is that of a chess match, with Sunlight unaware of the net tightening around him, yet capable enough to foil particular plays made by Savage’s Iron Crew. The intrigues ratchet towards Doc Savage’s inevitable victory–

–and then Sunlight slips away, with plunder from the laboratory and museum inside the Fortress of Solitude. A Pandora’s Box has been opened, leaving Doc Savage and company with a rare defeat and an urgent search for such scientific weapons of war as the world was never supposed to see.

Doc’s boys are a bit of an afterthought. “Fortress of Solitude” is already crowded enough between Doc Savage and John Sunlight, and the dense novelette cannot spare the time for all five of the Iron Crew to take places in the spotlight. Even the banter between Monk Mayfair and Ham Brooks is much subdued. Because of this, “Fortress of Solitude” may not be the best entry point into the series, at least for the character dynamics. Those, however we will explore next week, in the context of one of Doc Savage’s many copycats.

While “Fortress of Solitude” does not shrink away from the two-fisted action common to pulp-era stories, the focus is on mood, disguise, and intrigue. Almost as though Dent was echoing the works of fellow Street & Smith writer Walter Gibson. And while earlier adventures of Doc Savage have a quaint antiquity in speech and style, this one is more timeless and contemporary. One can very well imagine Clive Cussler’s heirs writing something similar today, although not as terse. But Cussler is not the only copycat, and the idea of a team of rockstar super-scientists keeps simmering in the public’s imagination…