The Great Adventure of the Dirty Pair 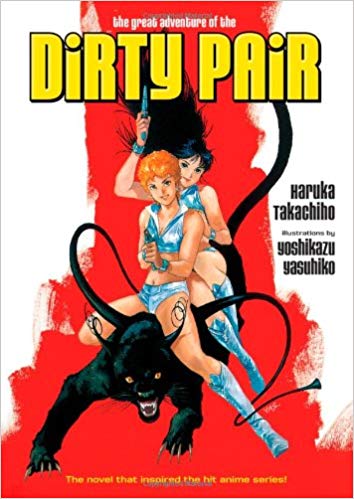 “We solved every case we worked on. It’s just that the solutions weren’t always pretty. An explosion here, an inferno there, and in the end, we’re left with a mountain of corpses, and, incidentally, a solution.”–Kei, “The Great Adventure of the Dirty Pair”

When science fiction writer A. Bertram Chandler visited Japan in the late 1970s, he had no idea that a stray comment would spark a multimedia science fiction franchise. When his hosts, including Haruka Takachiho of Crusher Joe fame, took Chandler to see a joshi (women’s) wrestling match, the antics of Takachiho’s assistants prompted Chandler to say, “”the two women in the ring may be the Beauty Pair, but those two with you ought to be called ‘the Dirty Pair’.” That stray comment sparked a novella that mixed Western pulp science fiction, Japanese joshi wrestling and idol singing, and a double-helping of chaos into what would be a classic raygun romance–if the Dirty Pair’s infamy didn’t keep scaring off potential suitors.

The Lovely Angels (don’t ever call them the Dirty Pair to their faces) is the code name for a pair of young trouble consultants. Kei, the narrator for the stories, is a brash, boastful, and lively hothead lifted from the covers of the pulps. Her partner, Yuri, is a demure Japanese beauty that acts as the brake to Kei’s recklessness–and the occasional focus of Kei’s jealousy as well. Together, Kei and Yuri form a set of complementary opposites–and a psionic duo straight out of John W. Campbell’s dreams. The resulting property damage, however, is straight out of a nightmare. In the best tradition of wrestling heels, the ensuing chaos is never quite their fault.

Like many Japanese stories, The Great Adventure of the Dirty Pair wears its inspirations on its sleeve. From wrestling, the series gets the outfits, names such as Lucha and the WWWA ( World Welfare Works Association from the World Women’s Wrestling Association), Kei and Yuri’s larger than life personalities, and their heelish yet sincere protests that the disasters in their wake are never their fault. The names Kei and Yuri are taken from the same assistants who entertained Chandler. From American science fiction pulps, the Dirty Pair steal liberally. Rayguns, heatguns, flying saucers, and Campbelline psionics feature prominently in the stories. Kei’s hair and build is classic pulp cover-girl, while the interior art is a mix of 1940s Weird Tales interior art and manga. Their adventures are the sort of trigger happy-detective story that filled the hero pulps. And, yes, that is a coeurl Kei and Yuri are riding on the cover, complete with the nickname “Black Destroyer”–and the special diet and property damage required by a hyper-intelligent alien cat. The result is a strange East-meets-West version of Northwest Smith, if Northwest Smith and Yarol were replaced by sorority girls.

While the two novellas in The Great Adventure of the Dirty Pair are standard futuristic versions of crime tales, complete with the requisite twists and betrayals, Kei’s narrative voice is the star of the show. Her larger-than-life exuberance practically drips from each word, even after translation into English. Some of this is due to Kei’s constant wrestling-style self-promotion, but Dark Horse did a masterful job in translation. Few English-language science fiction stories–and almost no light novels translated since–have such a vivid, unrestrained, and selfish voice animating their words, much less one trying to style herself as a heartbreaker and a lifetaker to potential partners and rivals alike.

At the end, when the villains are arrested, all the worlds are wrecked, and the refugees resettled, the Dirty Pair novel always preserves its.pulpy sincerity, complete with the foreboding that the Lovely Angels will soon wreak their accidental havoc on a new world.