The Holy Lance, by Andrew Latham 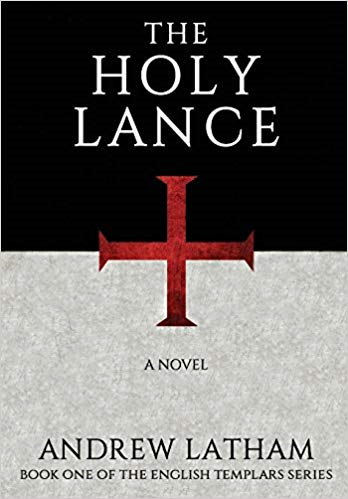 The Crusader Kingdoms made a pretty good go of things, and the success of heroes such as Godrey of Bouillon, Hugh the Great, and Bohemund of Taranto bought the stay-at-homes in Europe a few generations of relative safety from the relentless encroachment of the Muslim forces. By 1191, Saladin’s forces had delivered a crushing blow at the Battle of Hattins, retaken Jerusalem and the critical port city of Acre. The string of Muslim successes in the Levant prompted the Third Crusade to renew Christendom’s defense of the West on the shores of the Levant, and the resultant chaos of a region riven by war, internecine fighting, and outright banditry makes a perfect backdrop for adventure.

Into the seething cauldron of the late twelfth century Holy Lands strides the hero of Andrew Latham’s The Holy Lance, Michael Fitz Hume. An English warrior with a checkered past, Fitz Hume struggles to atone for his checks by dedicating his life to the Knights of the Temple. As the leader of the relatively young order of the Poor Knights of Christ at a battle that breaks the siege of Acre by Saladin’s forces, Fitz Hume attracts the attention of King Richard, who has need of just such a man. Word has come to the king of the presence of the Holy Lance, the Spear of Longinius that pierced the side of Christ at Golgotha, hidden away at a small monastery deep within Muslim held territory.

Most historical fiction set in this place and period takes one of two tacks, particularly when the Templars are involved. Modern writers, steeped in the cynicism and bland venality of secularism of our age, struggle to present the Templars as products of their own age. Using an enlightened and advanced understanding of what motivates men of our age, the Templars are usually painted as shadowy conspirators, outright demon worshippers, or simple selfish brigands draped in holy cloth. Even in those rare instances where they are portrayed more sympathetically, most authors of historical fiction cannot resist the temptation of showing them as zealous religious fanatics or naïve dupes used as pawns in games played by the powers of the day. The choice of authors to craft Templars without a consistent and coherent faith in the God under whose banner they march rarely works to the benefit of the narrative, particularly this early in the lifecycle of the order. The later wealth and power of the Order suggests a potential avenue of corruption, to be sure, but during the struggles of the middle Crusades, it’s hard to countenance all of the horror stories told about the holy warriors dedicated to protect pilgrims in the Holy Land. Even if the Order did become a haven for venal men seeking to hide behind the mantle of the cross, it would still require a base membership composed of righteous men to act as a smokescreen within which the villains might take effective shelter.

Fortunately, Andrew Latham presents a hero in Fitz Hume who stands strong and proud, motivated by a faith in God and a fear of divine retribution. Although a fierce warrior, his hot temper has caused him no end of trouble in the past, and even within the pages of The Holy Lance he struggles to contain his wrath. The inner turmoil prevents Fitz Hume from crossing over into the realm of Mary Sue even as it reminds the reader that good men exist and that heroes walk among us. The result is a living, breathing Templar who leaps from the page and makes the usual Crusader knight feel as two-dimensional as the typical treatment of the Crusades themselves.

Most stories set in this era focus on the conflict between Christendom and Islam, with passing nods made to the conflicts that threatened to tear apart the armies on both sides. The Holy Lance embraces the challenge of the interwoven geo-political mess of the era by thrusting Fitz Hume into a mission to recover a MacGuffin sought by multiple factions from the East and the West. Richard the Lionheart’s constant battles to maintain his leadership position and wrestle recalcitrant princes in line get the spotlight most often, but Saladin’s own headaches in that regard appear as well, as does the fraternal rivalry between the Templars and Hospitallers. The plots within plots sometimes unravel when they meet the plain and direct approaches of Fitz Hume, and sometimes snare him up and leave his head spinning. Who to trust becomes as much a tactical judgement as any battlefield decision.

It’s this complexity, handled with an unerring grace, that gives The Holy Lance such power as a narrative. It shines a light on the worries of those in the halls of power, and those caught in the hidden corners of the Holy Land when the titans vie for control. One particular scene that springs to mind features Fitz Hume, newly on the march through a land held by Christian pilgrims for generations, but left naked before the depredations of their new Muslim masters. With more Crusader armies to fight, the small villages tucked into valleys and the monasteries perched within mountain glens survived for years untouched, but with their men dead on the Hattins battlefield, they wait in vulnerable fear as each cloud of dust appears on the horizon. They know that any wandering band of raiders – whether they marched under the cross or crescent – might spell their doom, but cut off from all aid they can do nothing but wait the outcome of the next great battle and pray for deliverance from harm. The natural handling and moments of exposition of many such moments as this make the setting leap to life in a way that historical fiction tales seldom manage.

For fans of fantasy and historical role-playing, The Holy Lance also shows how adventure can be found even within the midst of generally civilized lands when authority begins to break down. Safe havens abound, though they often double as vulnerable homesteads, villages, and cloisters. Bands of brigands can appear on the horizon dressed in official livery or scraps of iron looted from recent battlefields. Where history books about the clash of civilizations fail as fodder for day-to-day adventure inspiration, a novel like this can provide a wealth of fodder for your game.

The Holy Lance presents a vivid picture of an era of heroes and villains, and it treats the subject matter with an even hand and a sympathetic understanding of who they might have been, and what might have motivated them. This simple decision, to honor the long dead denizens of that distant time and place by telling their stories with a sympathetic eye and contemporary view of the world, breathes a life and energy into The Holy Lance and its heroic lead that will thrill fans of historical fiction.

One word of caution, though the cover promises The Holy Lance as the first in The English Templar series, later books do not appear on Amazon, even in the used section. The ending of The Holy Lance promises a lot more adventure for Fitz Hume to come, but we’ll have to hope that Latham’s own adventures in our present age don’t prevent him from delivering on that promise. If he ever does – I’ll be there!